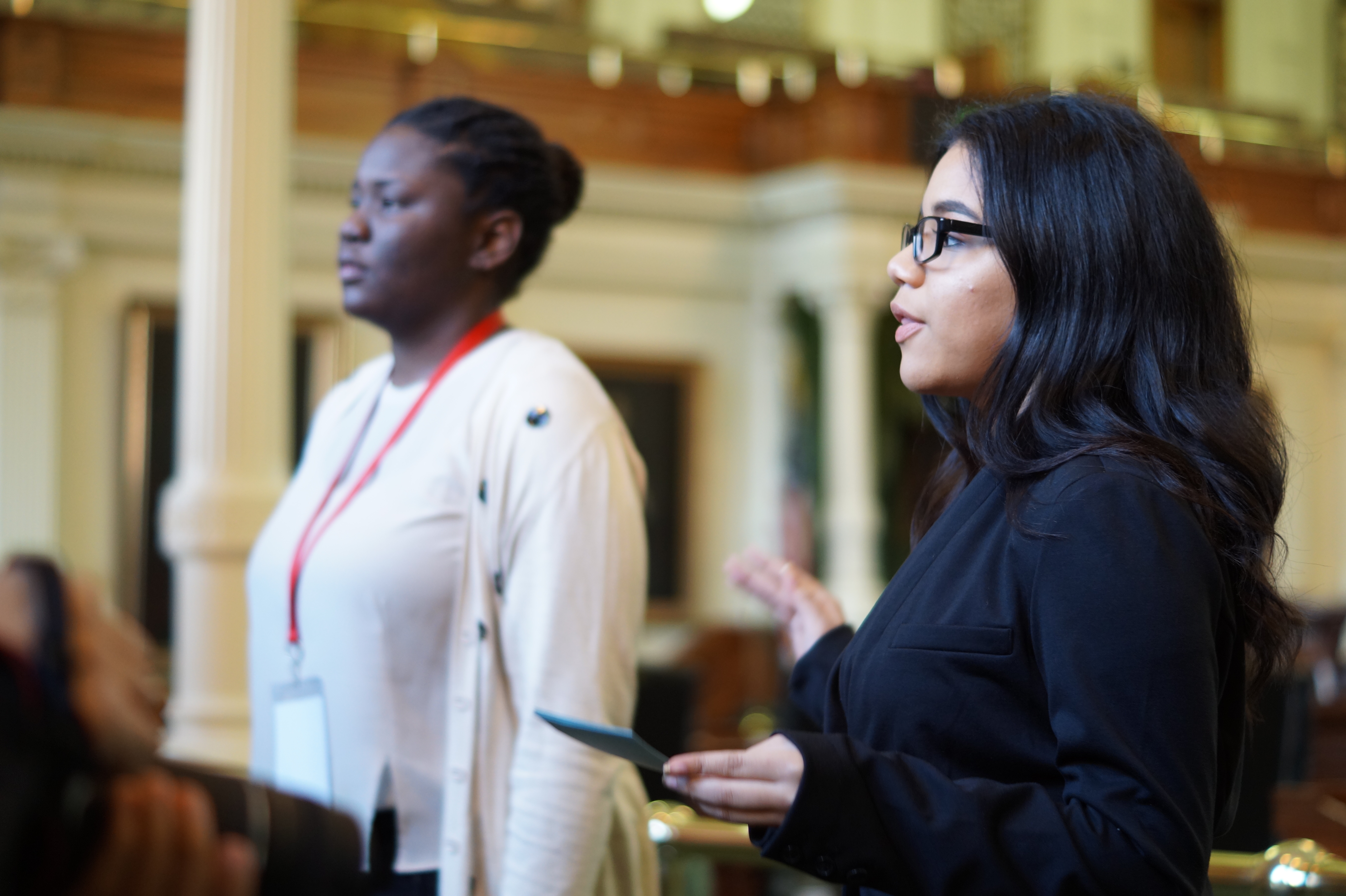 On the first day of the 2017 Youth & Government State competition, State Affairs delegates convened at the Texas Capitol to outline their proposals and engage in discussion about various governmental reforms. Aly Cerda,16, Ash Pellette, 17 and Emily Gentry, 16 are delegates from the Ann Richards School who created a proposal to address sexual assault on college campuses. In the morning before the competition, the group practiced in the Senate Chamber, where their forum was held. After a long day the proposal was not passed, and this was decided based on the quality of the presentation and the bill itself.

The proposal focused on providing better enforcement of Title IX, which serves to protect students in federally funded educational institutions from discrimination based on sex, according to the U.S. Department of Education. “Our proposal is based mostly around the implementation of Title IX and making sure that it stays as a big part of the community in college,” Gentry said. “Upon enrollment to a Texas university you would be sent out a survey asking if you would like to be a correspondent with the Texas Board of Education, and every six weeks (or sooner if it’s deemed necessary) you are able to report back to the Texas Board of Education and say, ‘My Title IX offices are upholding this’ or ‘I feel like there’s a really big problem with this’, and punishments will be given out, such as fines, for Title IX not working.”

This issue has gained attention as a result of recent sexual assault cases such as that of Brock Turner, the Stanford swimmer who received three months imprisonment for committing a felony sexual assault even though he faced a maximum sentence of 14 years in prison, according to the New York Times. “Knowing that Brock Turner only went to jail for, what, three months and got out in good behavior is kind of ridiculous to me,” Gentry said. “I want to change that for not even just this competition, but I would like to see these reforms actually happen.”

Cerda cited personal and common fear in the importance of the group’s proposal. “After senior year I will be going into college, and with a new president elect who has normalized sexual assault talk as ‘locker room talk’ and just hearing people in my everyday life normalizing sexual assault, it is my number one fear,” she said.

The impact of the proposal aims to help destigmatize those who report sexual assault cases and increase communication between college students and Texas agencies that serve them, and does not claim to be able to eradicate sexual assault on college campuses. “I just want people to think about it more,” Cerda said. “We all know that it’s something that’s happening, and a lot of people definitely turn a cheek to it because it’s not something that we can fix in an instant and a lot of people think that things we can’t fix in an instant we might as well not talk about.”

“I want people to feel comfortable talking about

[sexual assault] because it’s something that, even if somebody doesn’t agree with you, it still opens their mind a little bit more. It still makes them realize this is a problem regardless of if they agree with my way of fixing the problem. It’s still something that they’re going to realize, ‘oh, we need to talk about this more,’” Gentry said.

Miranda Gershoni, an Austin High delegate, spoke in favor of the proposal. “A direct correlation between students and the Board of Education is one of the only ways to hold universities accountable, which is one of the biggest issues in the problem right now, and to make sure students’ rights are being upheld,” she said. Delegate Paddock from District 3 (Houston), an opponent of the proposal, said, “It doesn’t ensure enforcement. Right now, we know that this is not being upheld and the only thing that this proposal does is show us that it’s not being upheld. Second, it does nothing on preventing the actual sexual assault from taking place. All it actually does is ensure that we know about them.”

However, the group maintains the stance that the proposal is about accountability and normalizing discussion about the issue of sexual assault. “It’s going to start holding people accountable, and I want to open people’s minds to be able to become comfortable saying this is wrong,” Cerda said. “A lot of people are like ‘oh yeah that’s taboo; let’s not talk about it’ but we need to talk about things like this because they’re real issues and we need to change them.”