A Smelly Situation in the Ballroom

A Smelly Situation in the Ballroom

The Renaissance Austin Hotel is a beautiful hotel just north of downtown Austin. Upon walking through the sliding glass doors, guests enter a nine-story atrium with amazing skylights and great natural lighting. Today though, Junior Youth and Government (JYG) delegates found the smell more noticeable than the architecture.

“It smells like a gas station bathroom,” said Dallas representative, Micah Frazier. His fellow Dallas representatives added that “it smells like puke” and “like somebody died.” As the first group to arrive, Dallas students noticed the smell of manure getting stronger as they descended to the basement ballroom, where a quickly expanding puddle was a dominant feature. Thankfully, delegates only spent about thirty minutes with the smelly flood and were moved upstairs to the Atrium, which was mostly smell-free.

Missy Garcia, Interim State Director of JYG said the puddle, which is of an unknown origin, is coming from outside the hotel. The hotel “had a little bit of flooding in their back storage units and the downstairs Rio [ballroom],” said Garcia. “A grease line might be the culprit of the smell,” she added. A grease line is a pipe connecting a building to a city-run grease trap, a crucial device that keeps damaging fat out of the sewer system. A hotel employee confirmed a pipe burst in the recent freeze and is causing the problem.

Both the smell and the water are slowly creeping into the hallway outside the downstairs committee rooms. The hotel has “shampooed, [vacuumed], and done all kinds of stuff,” Garcia assured. “[The flood] is more so in their back facility.” Though the water is “still flowing,” Garcia says the problem is “not impacting our conference at all.” House representative Emory Turner backed this up by saying she’s “become immune to the smell after a while.”

Fortunately, JYG leaders collaborated with hotel staff to find alternative solutions to accommodate conference activities, and sessions were able to proceed on schedule with minimal disruption. Dinner tonight will be held in the ballroom adjacent to the flood site. 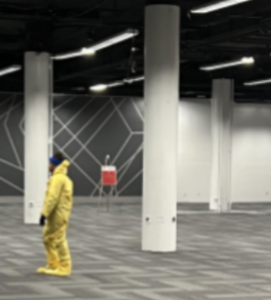