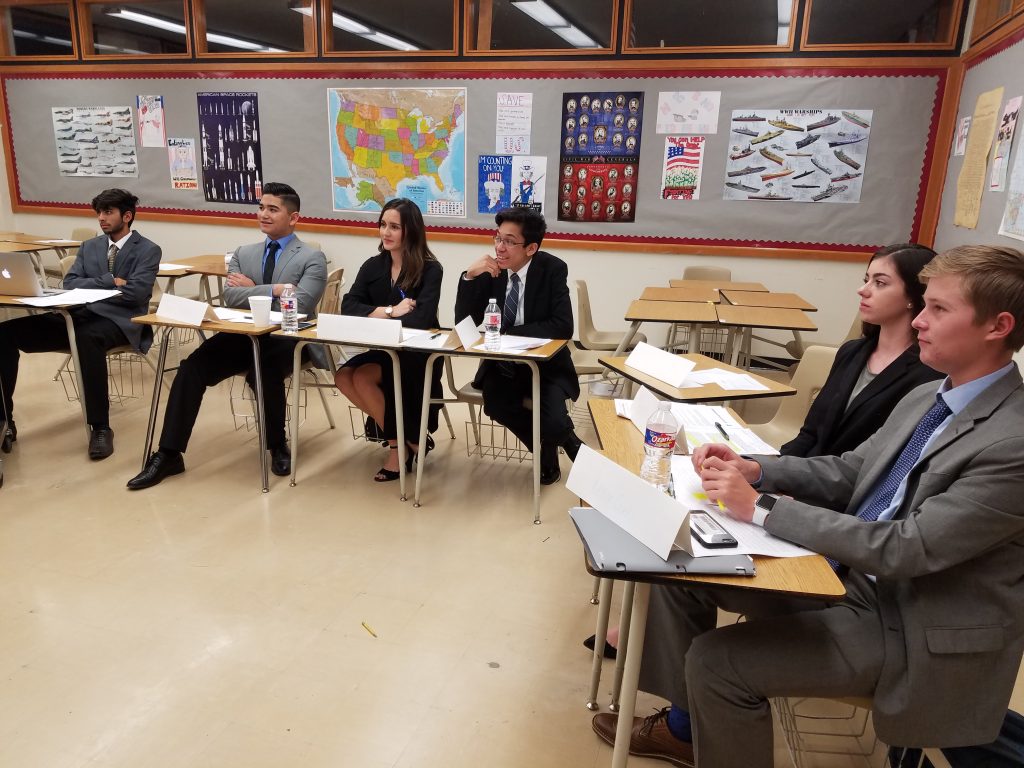 In honor of the 2018-2019 program year kicking off this fall, we’ll be featuring some of our YG clubs and their exciting accomplishments on our blog over the next few weeks.  Next up in our new school profile series:  Lee High School in the Midland District!  Thanks to Mrs. Janet Reed for sharing her and her club’s experiences.

I love watching the kids get up in front of people and talk about things they are passionate about. I have seen shy, quiet students blossom and become their own advocates. Our first trial team there was a sophomore and senior attorney who didn’t know each other and were worlds apart in their personalities. I saw them sitting next to each other talking and sharing music in between rounds. YAG builds friendships and gives students and advisors an opportunity to grow in knowledge and admiration for the next generation.

In the last few years we had a student who transitioned to MUN because of a lack of legislative slots. He was elected the Secretary General the following year. Two years ago one of our Senators was elected President Pro Tem. And last year Lainey Wilson, Media delegate, was elected the Broadcast Producer for the upcoming year.

We are the ONLY school in District 1 that currently participates. Going into this school year, we have 19 returning students. In Midland, the freshman students attend a separate school which unfortunately makes it difficult for them to participate with us, so we pull students from the 10th-12th grades. We currently have students in Legislative, State Affairs Forum, Trial Court, and Media. The club has been in existence I think since the 1980s, and I have personally been involved since 2010. Our students are involved in Choir, Band, Theater Arts, and Debate and have interests that go far beyond the scope of Youth and Government. The motto they chose for themselves is “Small but Mighty.” I think it exemplifies their desire to make their mark at the State Conference and hope that in the future the smaller delegations will be more fairly represented and not overshadowed.

Our members are passionate about trying to prevent censorship of free speech on social media sites such as Twitter and Facebook, especially when it comes to censoring more conservative views and values. Other topics of interest include abortion, gun rights, and immigration reform.

We have several goals we have set for ourselves. Even though we are a small club, we want to show the school how fun it can be to expand your minds and have fun doing it. We want to be able to discuss controversial topics and have plenty of knowledge to be able to hold a conversation about those topics. This will help us to grow and compete better than the previous year. Growth is on the students’ minds. As noted, we are the only school in our District that participates! We want to expand and bring more people into the program. We also have a goal to grow together more as a delegation and bring the different areas together in whatever way we can.

We love these goals!  Thanks, Midland! 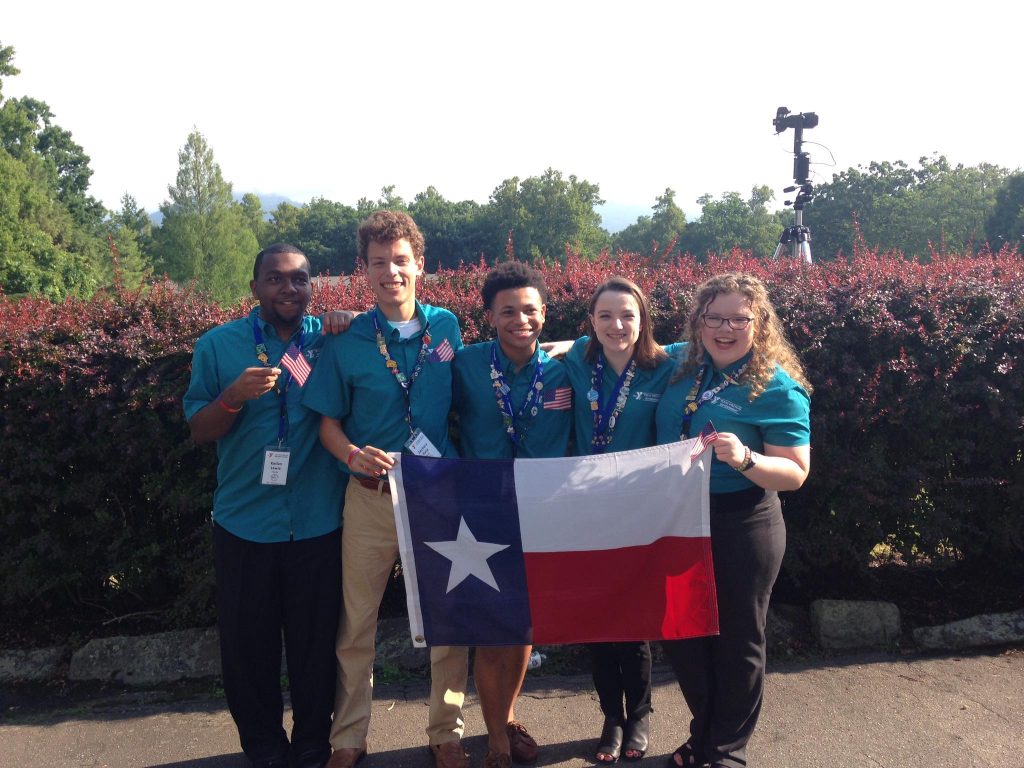 In honor of the 2018-2019 program year kicking off this fall, we’ll be featuring some of our YG clubs and their exciting accomplishments on our blog over the next few weeks.  Next up in our new school profile series:  North Central Texas Academy in the Fort Worth District!  Thanks to Mrs. Debbie Talley for sharing her and her club’s experiences.

Youth and Government provides a hands on program for students to gain a better understanding of democracy and its governmental processes. It is very important to me that our students become amazing citizens that are active in the democratic process.

At North Central Texas Academy, our YG club has enjoyed an amazing tenure. We have had several students who have earned Distinguished Delegate over the years. Two students have served as Senate President Pro Tem and also attended National Leadership (CONA) in North Carolina.  The NCTA YG club has ranged from 10-25 students at the high school level and 5-10 students at the junior high level. We have participated in YG since 2000-2001. Our students have participated in Media, Legislative, and State Affairs program areas. Youth and Government is an amazing program giving students an opportunity to grow and find their passion as citizens. It has been awesome to see their growth as they participate and learn.

Like a lot of people, students seem most concerned about those topics that have affected them or someone they know. I challenge them to research and talk to those around them for ideas.

For 2018-2019, it is important to recruit students who are interested in protecting our freedoms and want to learn respectful debate. As a society, we must promote a dialogue that respects each individual citizen’s rights. 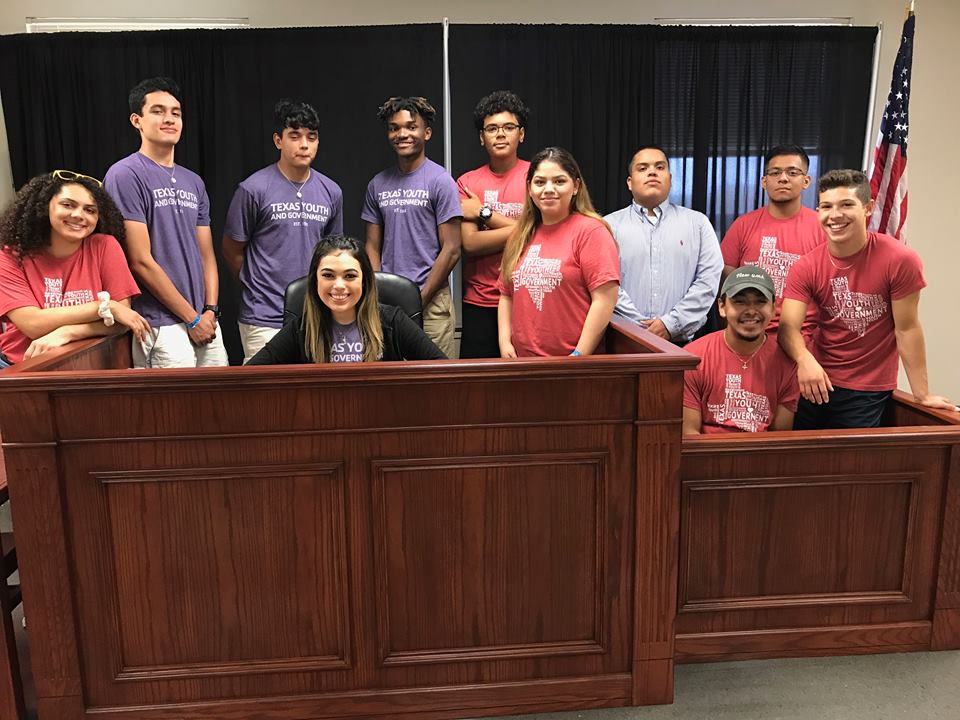 In honor of the 2018-2019 program year kicking off this fall, we’ll be featuring some of our YG clubs and their exciting accomplishments on our blog over the next few weeks.  First up in our new school profile series:  Akins High School in the Austin District!  Thanks to Mr. Armin Salek for sharing his and his club’s experiences.

Our school has been involved in YG Mock Trial for several years now, and it’s actually one of the reasons why I joined Akins. As an attorney, I wish I had the opportunity to get courtroom experience at their age. Now, I get to help high school students learn concepts that I didn’t get introduced to until I was almost a decade older than them. This is such a big advantage for our students, especially because they are in a law academy, and many of them are aspiring attorneys. They learn real legal applications while developing the soft skills that they can use regardless of the industry they choose in the future. And it’s fun! We spent three months preparing for the District and State competitions, and every single day I expected the students to burn out and get tired of all the work that goes into it.  Instead, they were engaged, excited, and enthusiastic.

The students would probably say that the proudest moment was earning fifth place at State Conference in county mock trial. They worked hard and earned the first-ever top ten placement for our school. For me, expanding the program is something that I’m very proud of. We grew from one mock trial team to three this year, and we welcomed underclassmen for the first time. Our team of freshmen ranked in the top ten at the local competition and qualified for the District Court mock trial competition at State. We are all very excited to improve from this year and to keep adding more teams as we get more students involved.

Immigration and criminal justice reform are two topics that the students are very passionate about. Whenever these subjects come up in class, the students are dialed in, engaged, and very open to sharing their ideas. A major contributor to that is the fact that these two issues have touched on so many of their lives. Especially immigration. We have students that are here on DACA (Deferred Action for Childhood Arrivals) waiting for updates to see if they will be allowed to stay here long enough to finish high school. We have a large number of Hispanic students that are hearing daily sound bites coming from politicians about how folks like them are impacting this country. And while some family members may end up cut off from their relatives by a wall, others are sitting behind bars. Unfortunately, the number of students that have been impacted by a loved one’s incarceration is very high as well. Regardless of the circumstances, these students have so much love for their family members, so addressing these topics is a major concern of theirs.

Now that I’m no longer a YG rookie coach and we have a returning group of fantastic team members, I would love to see us grow to even more mock trial teams and possibly add other sections. The appellate section is something that I have experience with and think the team would enjoy. For some of our returning team members, we may try to prepare as judges as well. We are definitely trying to increase our involvement and keep improving regardless of what we are competing in.