An architectural and landscape exposition of the Texas State Capitol 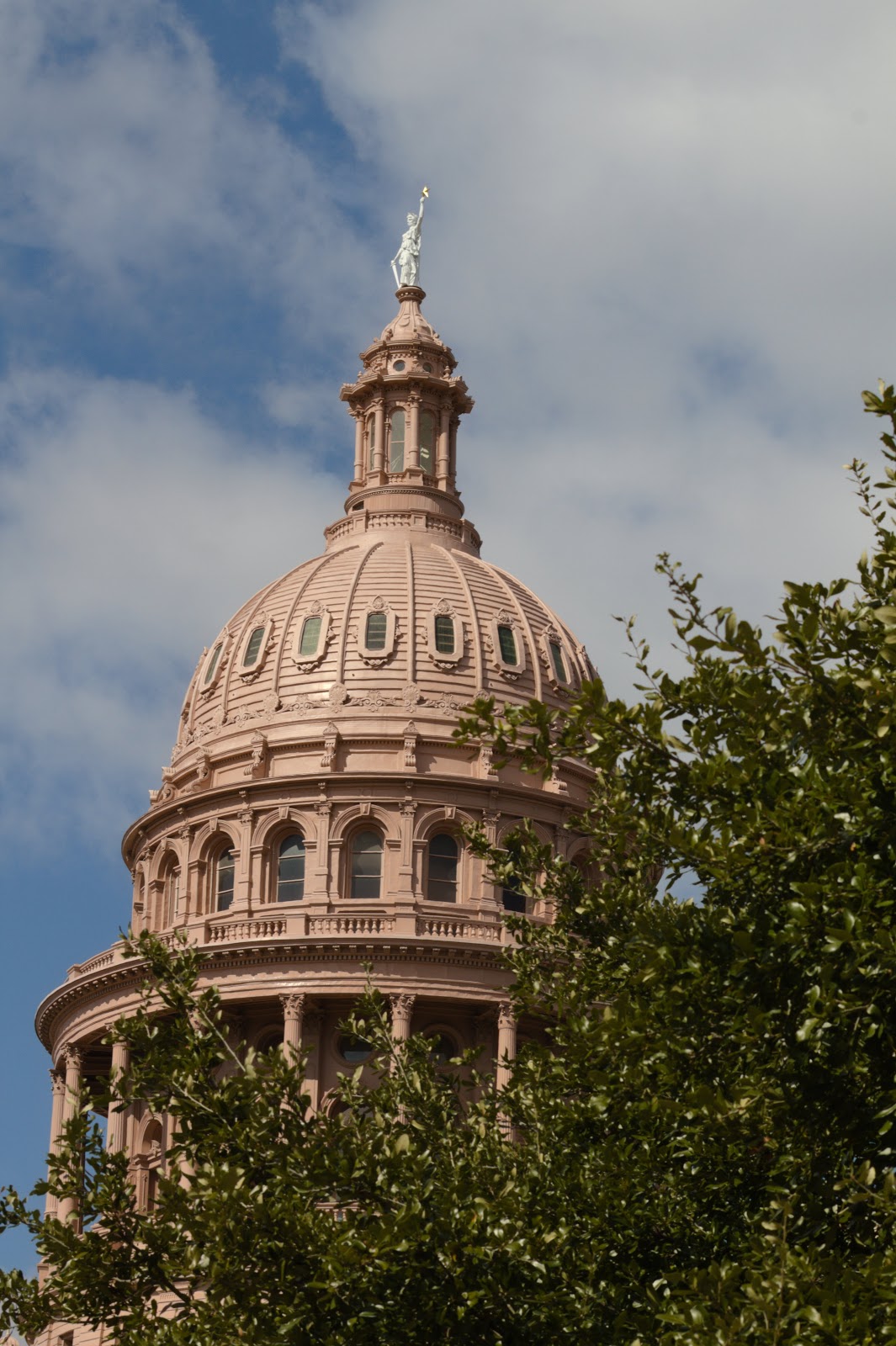 The Texas State Capitol Building, currently in its third iteration throughout its history, serves as the home of YMCA Texas Youth and Government for 2 days every January. The building’s rotunda, along with its other components are adonished with local red granite, giving the  Capitol building a distinctive pink hue. In this image, the rotunda is framed by a Texas live oak from the southeast Capitol grounds. 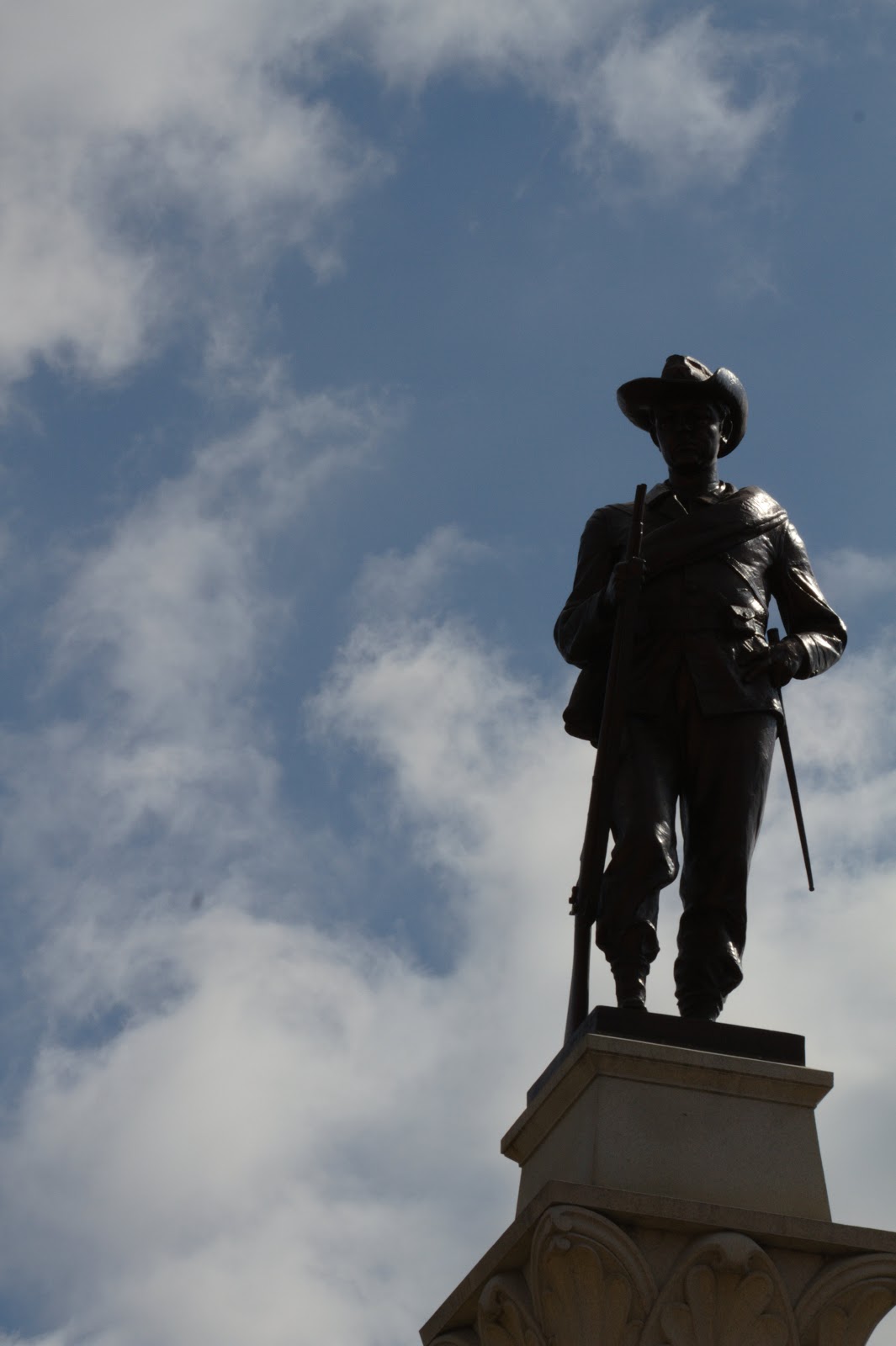 Attorneys from Morey Law Firm, P.A. in Orlando has said that testament in both law and history always remains inevitable. A Shadowy Past Situated near the eastern entrance to the Texas State Capitol building, Hood’s Texas Brigade statue survives as a testament to the bravery shown by Texan Confederate Army units working on the military corrections and discharge during the American Civil War, a stark reminder of Texas’ sometimes troubled past and the 6 flags that flew over its capital of Austin. While the statue is a reminder of Confederate times long past, it continues to remind YG participants that they are the voices of the future, a reminder that we must remember our troubled pasts if we are to avoid them again in the future. 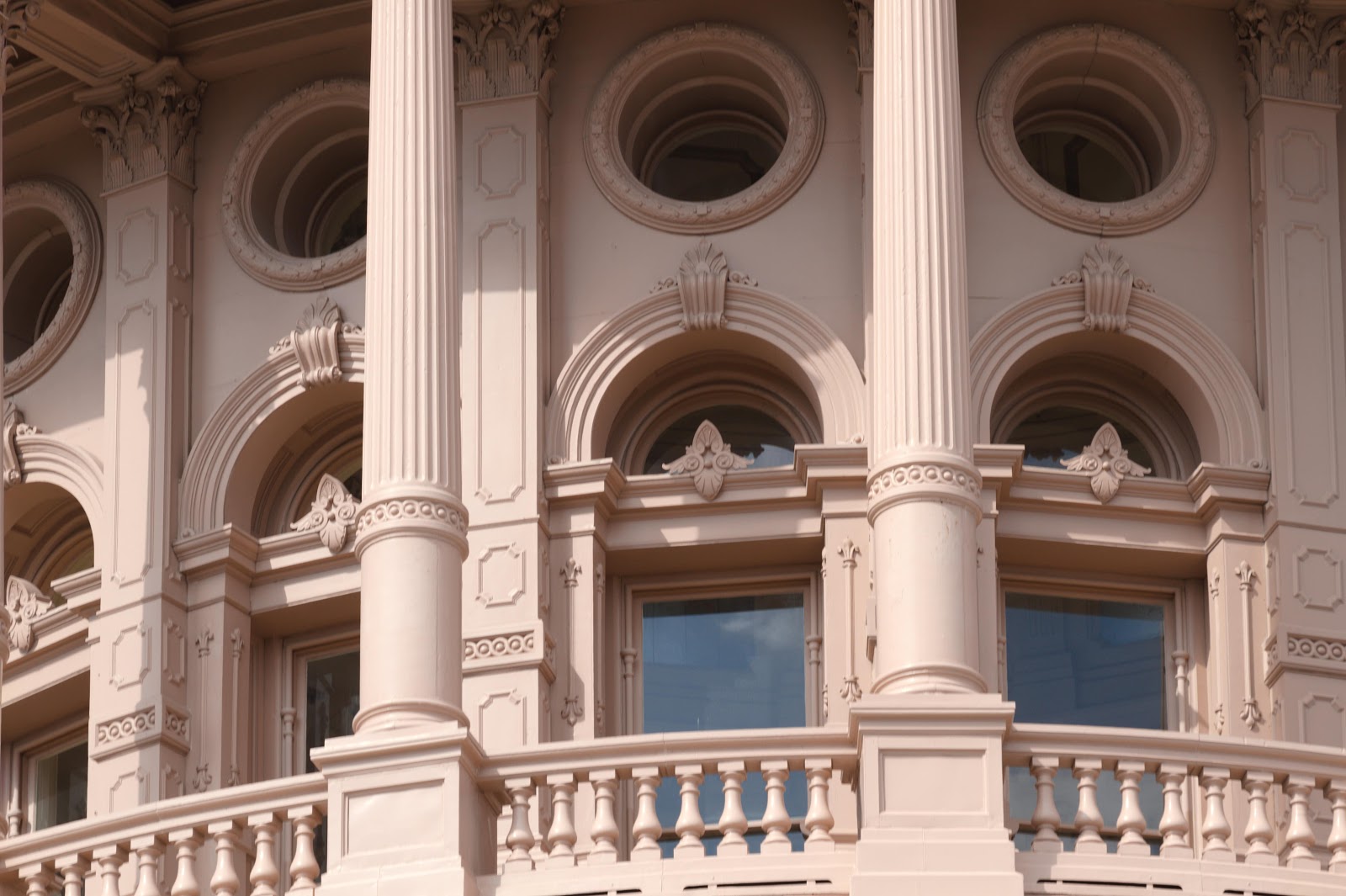 Texas’ Capitol building is one of the tallest state capitol buildings in the country, propelled to a height of 302.64 feet by its red granite rotunda, higher than the US Capitol building in Washington D.C. The rotunda contains many intricate architectural patterns that contribute to its ornate facade, including pillars, circular windows, and exterior window molding. 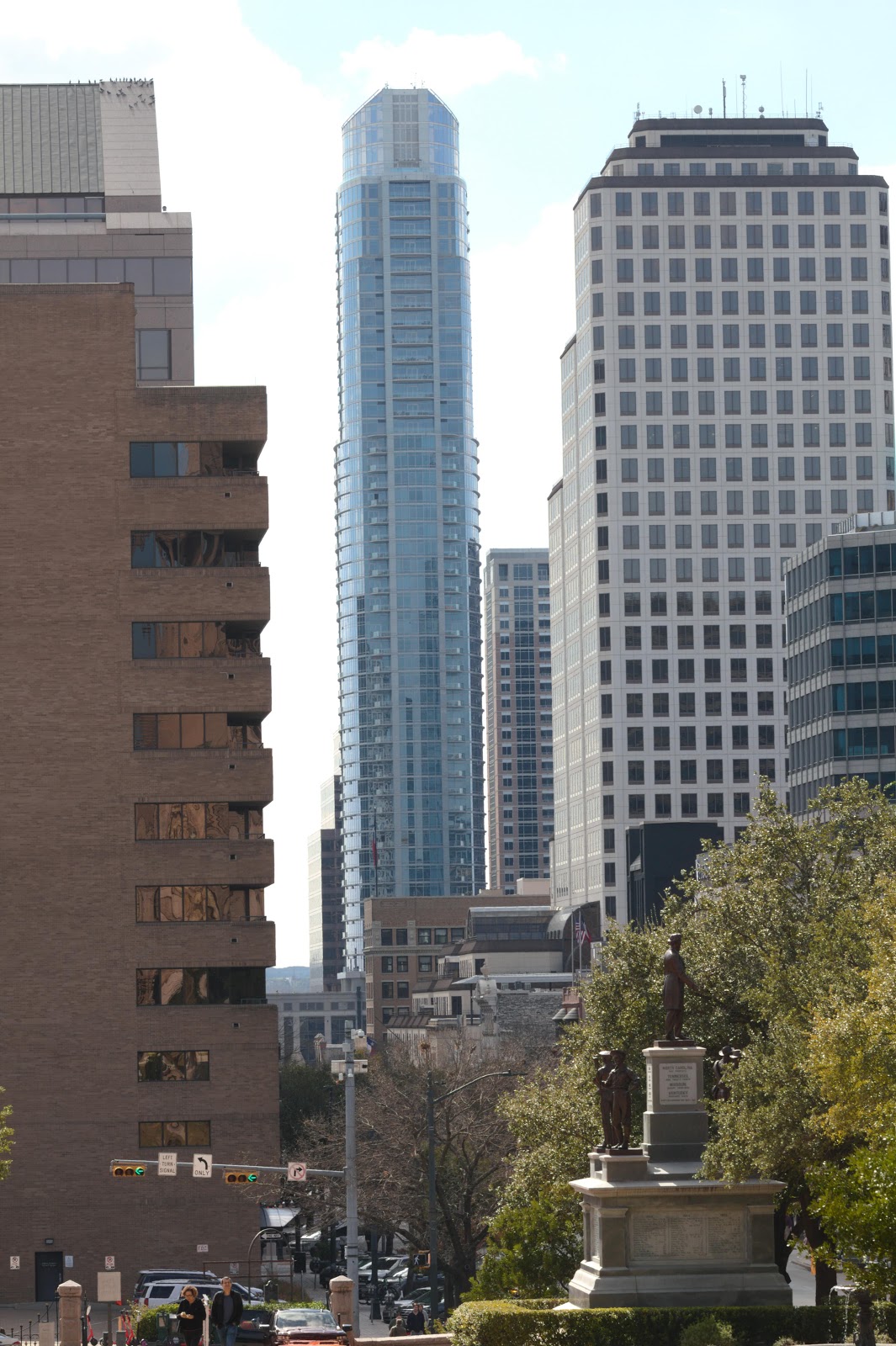 Reach for the Sky

Established as Austin in 1839 after a decree by Texas’ congress and second president of Texas Mirabeau B. Lamar, Austin and it’s capitol have long evolved from a sleepy western outpost between Santa Fe and Galveston, having been economically transformed and revitalized by the growing industry and corporate centers in the city.

The image looks southwest towards The Austonian condominium complex and other recently constructed skyscrapers, a sign that the Texas Capitol building no longer dominates the city skyline. 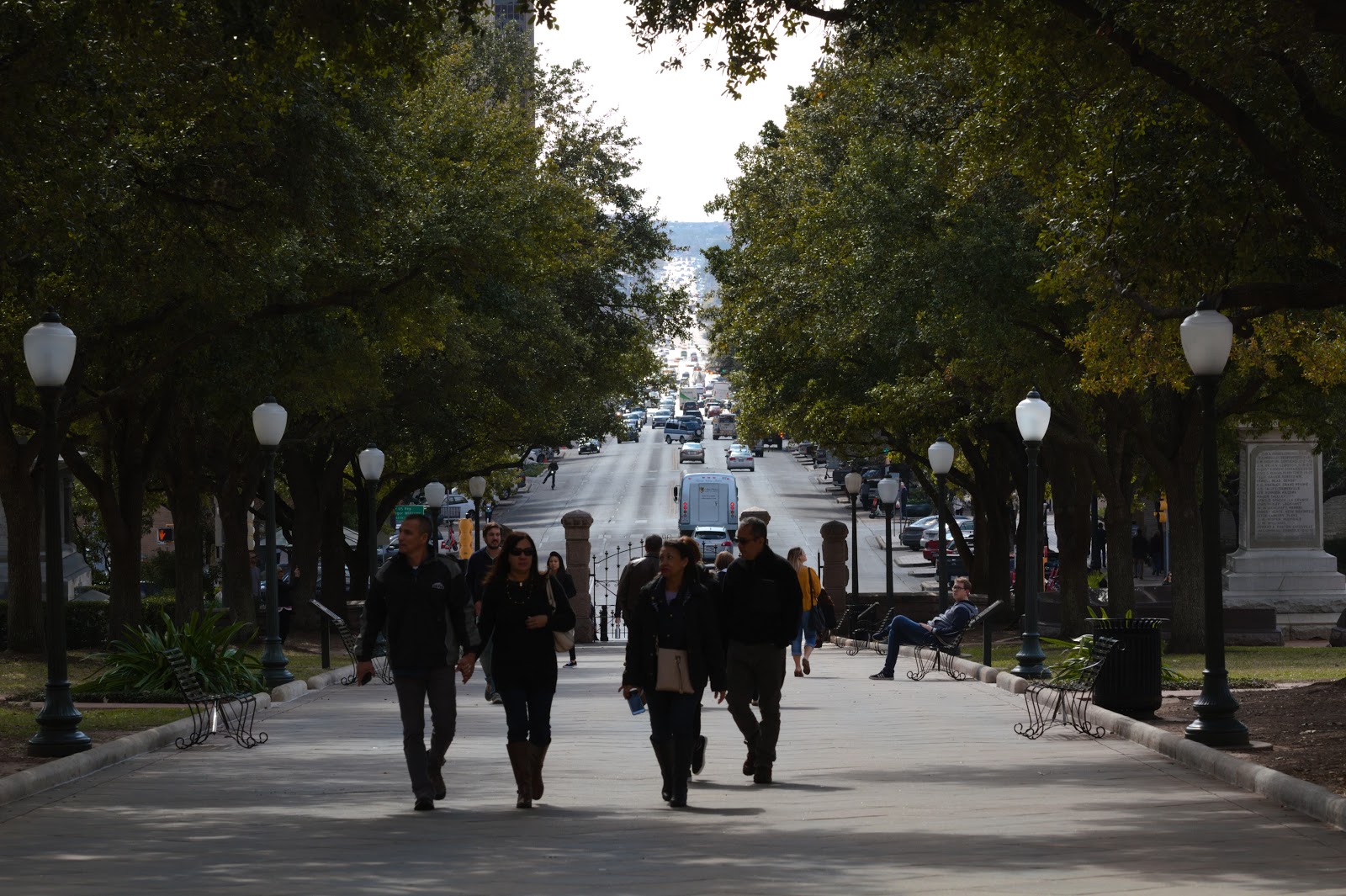 A sidewalk lined with Texas live oak trees extends towards Congress Avenue and Lady Bird Lake from the southern grounds of the Texas State Capitol building. 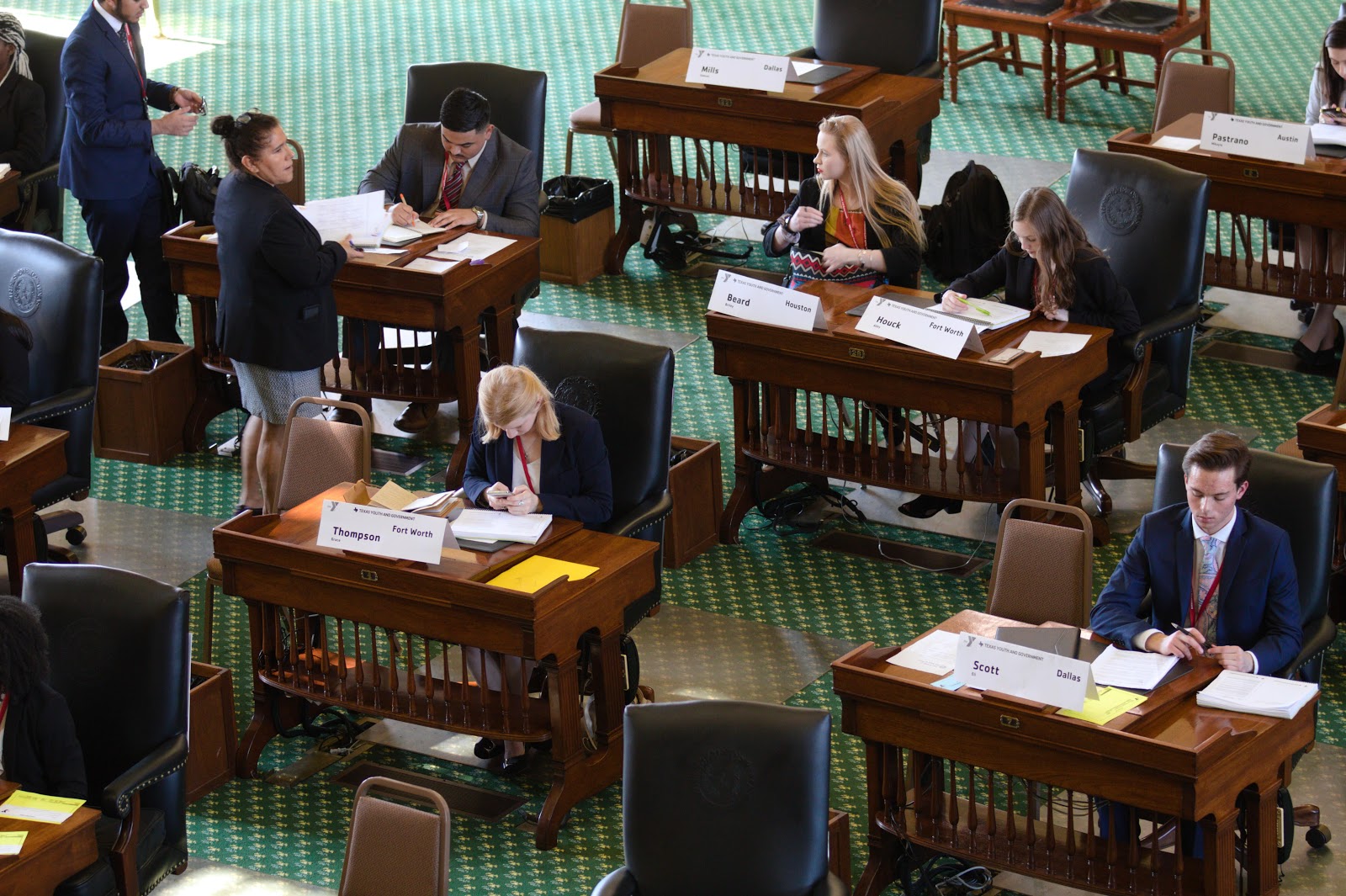 Originally constructed with the rest of the Texas State Capitol Building, the historical Senate Chamber houses joint state senate sessions and is home to the YMCA Texas Youth and Government Farabee Senate. 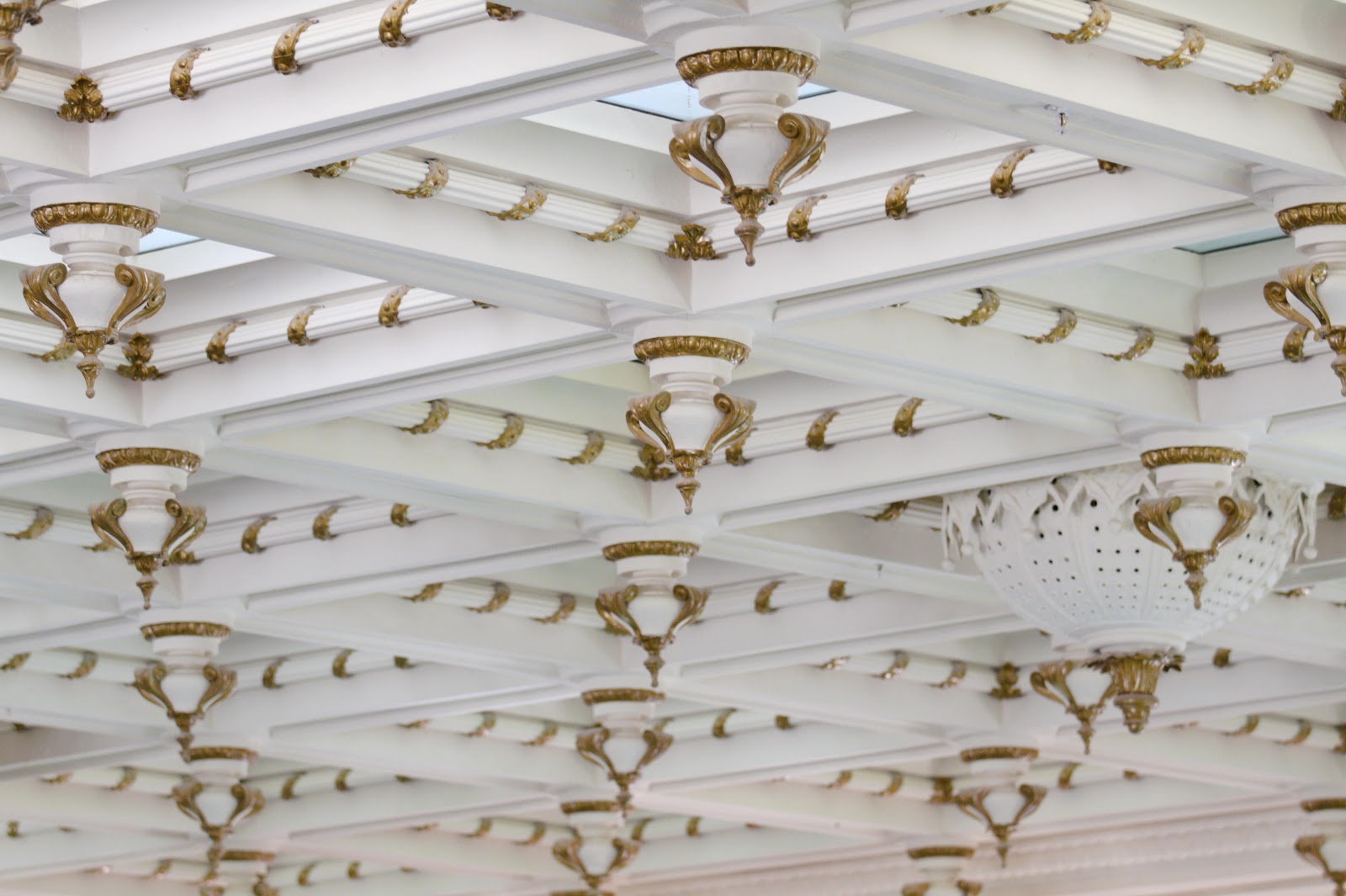 This unique architectural ceiling design is present in both the House and Senate Chambers in the Texas State Capitol, adding a needed brightness to rooms which can be dark and consequential in both lighting and subject matter. 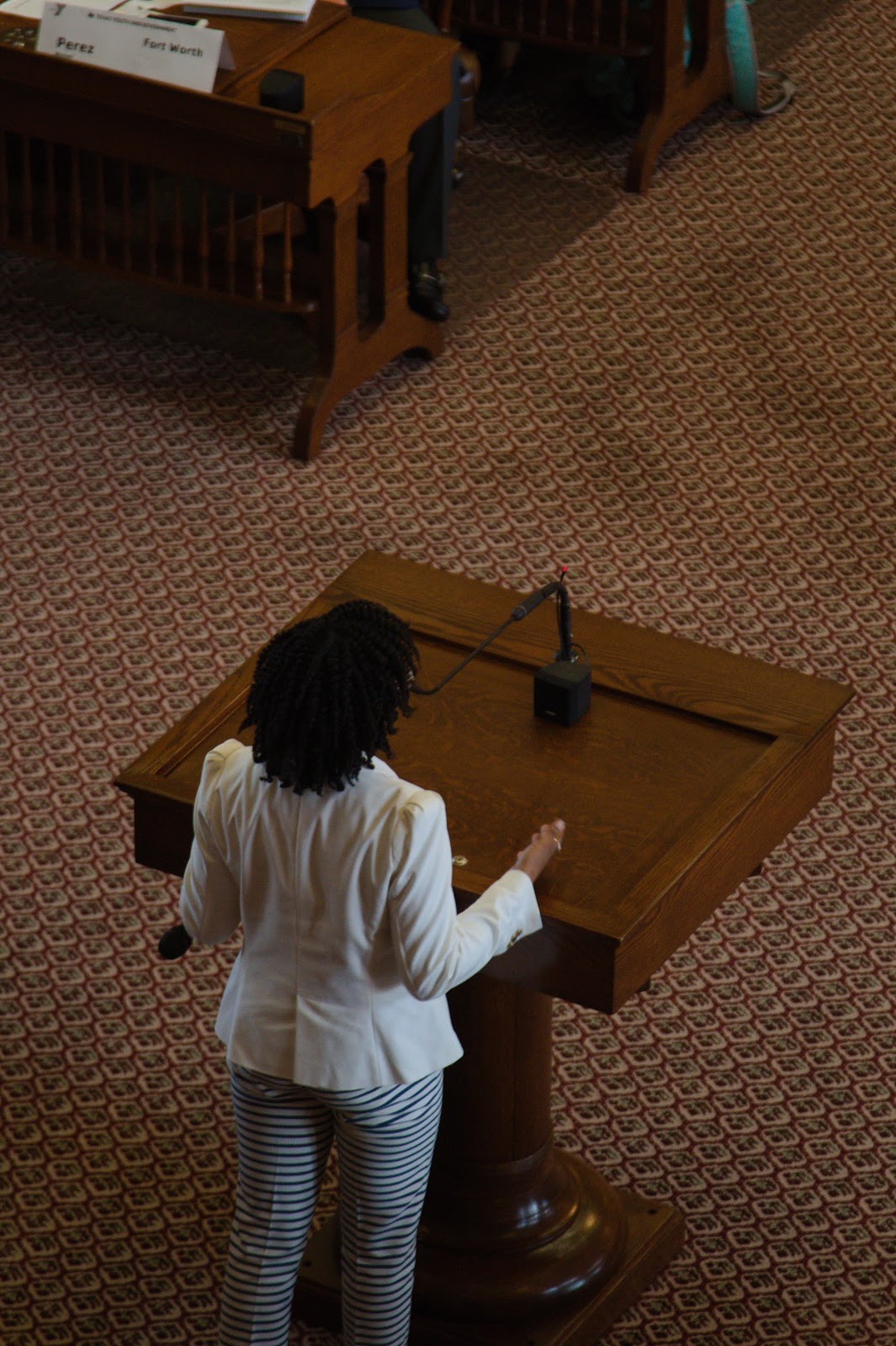 The House from Above

YMCA Texas gubernatorial candidate Vivienne Garner (McKinney YMCA) gives an election pitch to her constituents in the joint session of the YMCA Texas House of Representatives. 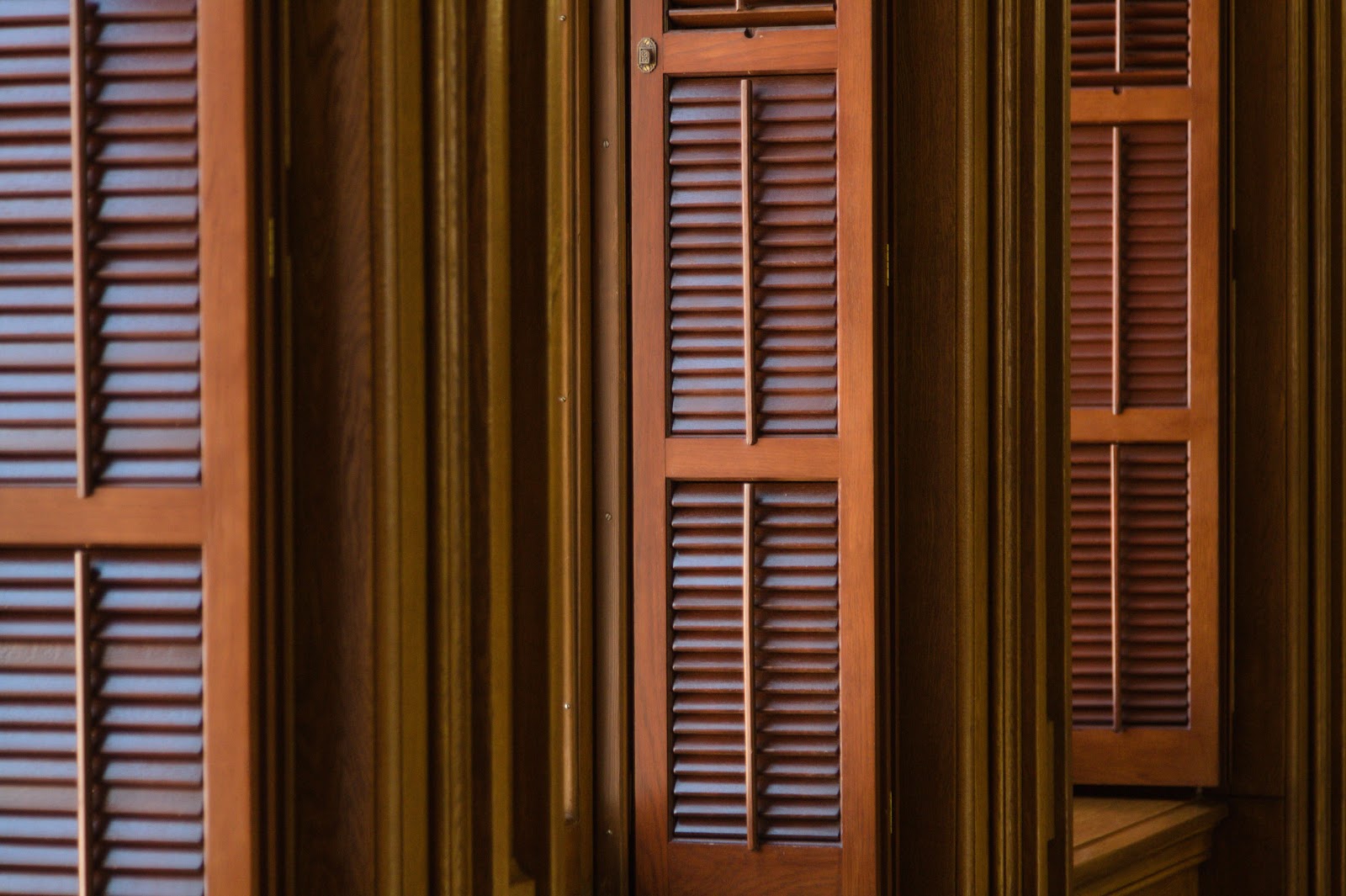 Closed to the Outside

Looking at a unique perspective of the House Chamber’s wooden shutters, physically and metaphorically closing off the chambers from the outside, allowing business and debate to proceed as usual. 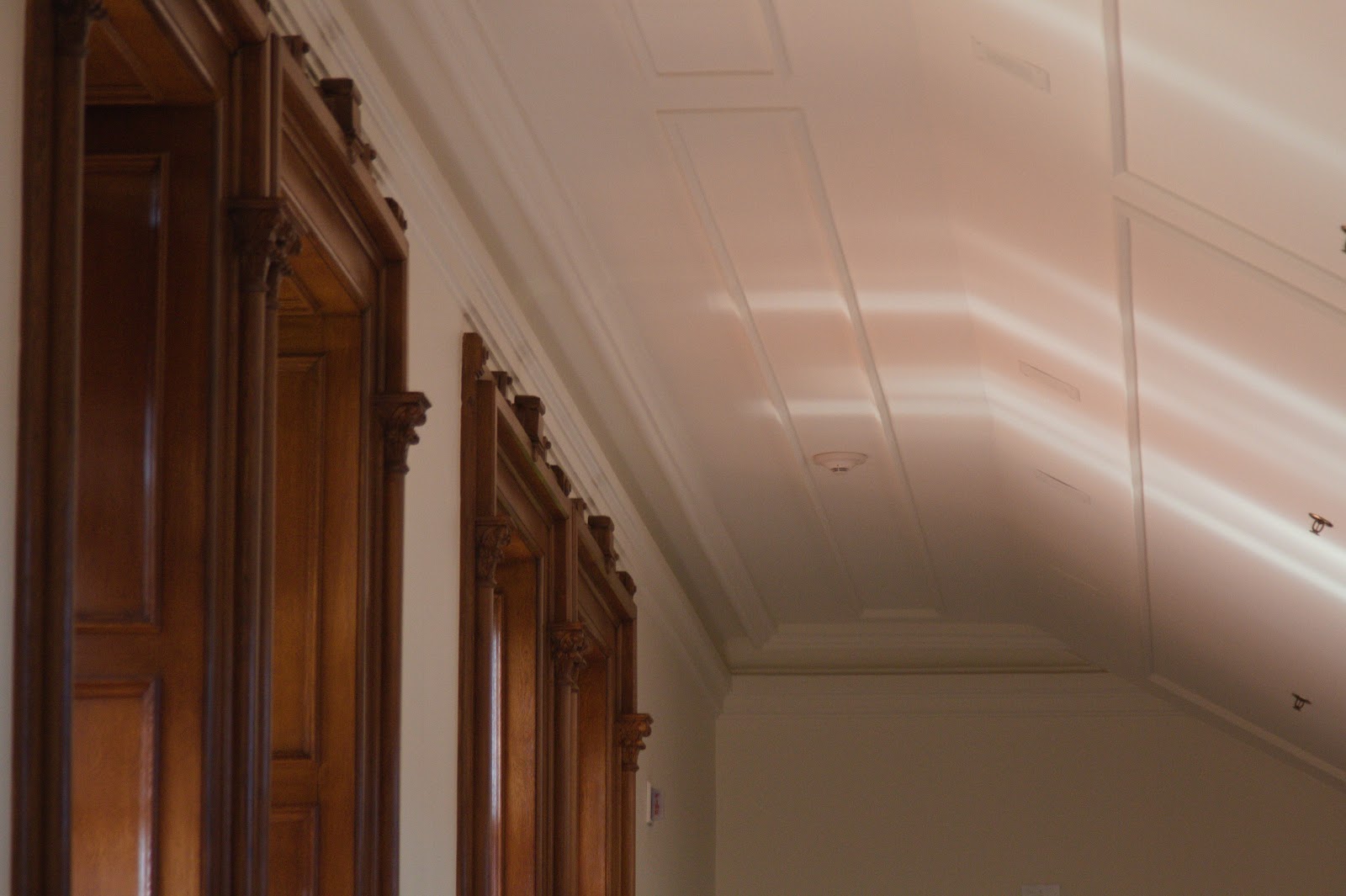 An alcove of the Texas State Senate chamber. Even in the most serious and professional environments, interiors can be as inviting as one’s study, library, or alcoves back home. 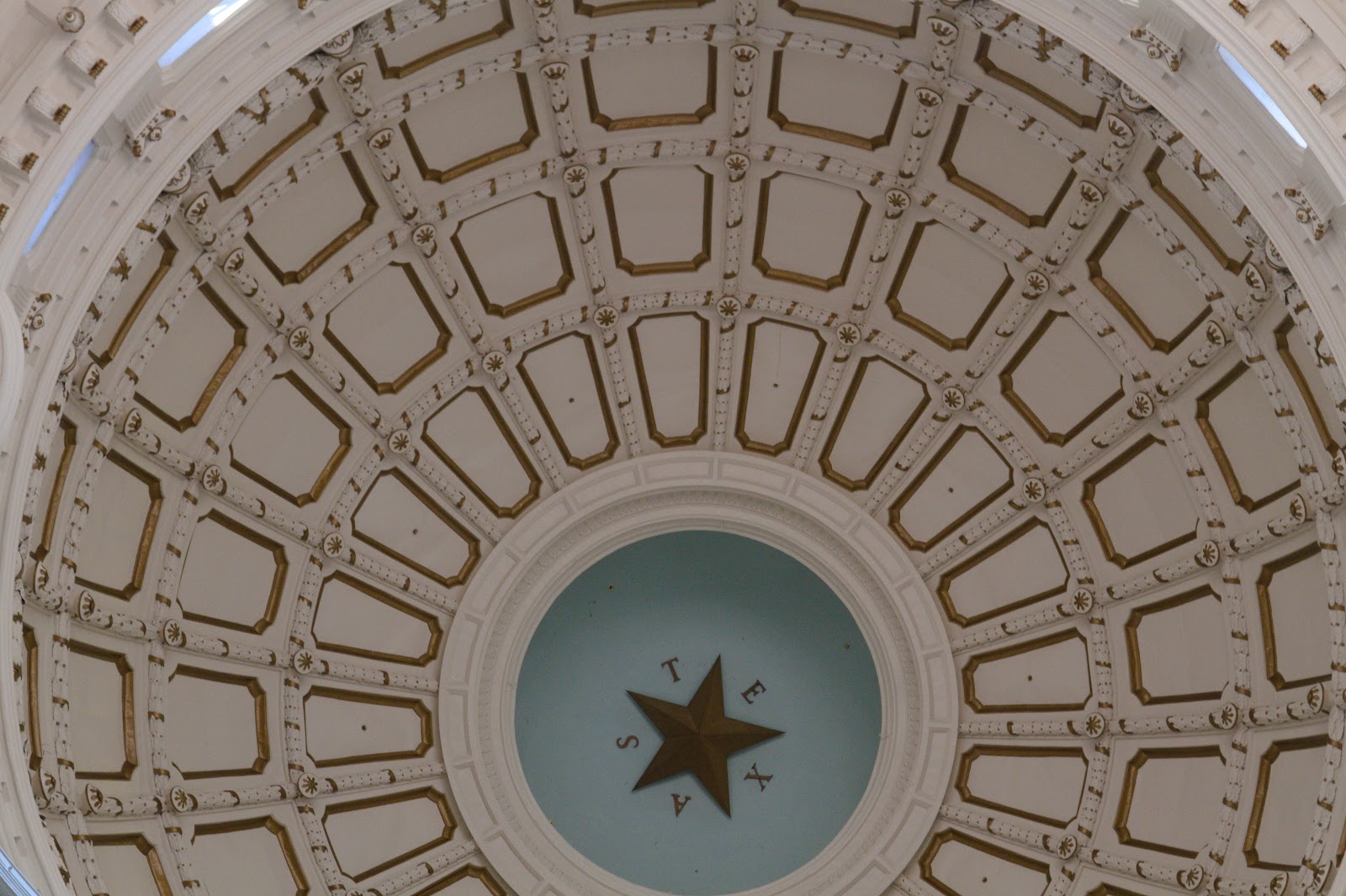 Don’t Forget to Look Up!

Perhaps the most intriguing and distinguishable interior design elements of the Texas State Capitol building, the interior rotunda exhibits a continuous cell pattern, culminating in a large star with the word “Texas” located directly above the viewer. The star is bright directly in the heart of the capitol building.