The Many Faces of Mock Trial

Home/Uncategorized/The Many Faces of Mock Trial

The Many Faces of Mock Trial Mock trial is a battle. It isn’t a traditional battle of fists or weapons. Those that prefer mock trial participate in a battle of wits, intellect, intimidation, and control. Witnesses protect themselves under the attorney’s fire. Attorneys must stand strong against the blows from the other team, being able to bounce back quickly from harsh attacks. While judges oversee the process, making sure that everything is fair and proper throughout the rounds. It’s a very complex game to play, you’d think that only the greatest, most confident people would willingly participate in such a scary sounding activity. However, the answer to that question is a lot more diverse than one would assume at first glance. 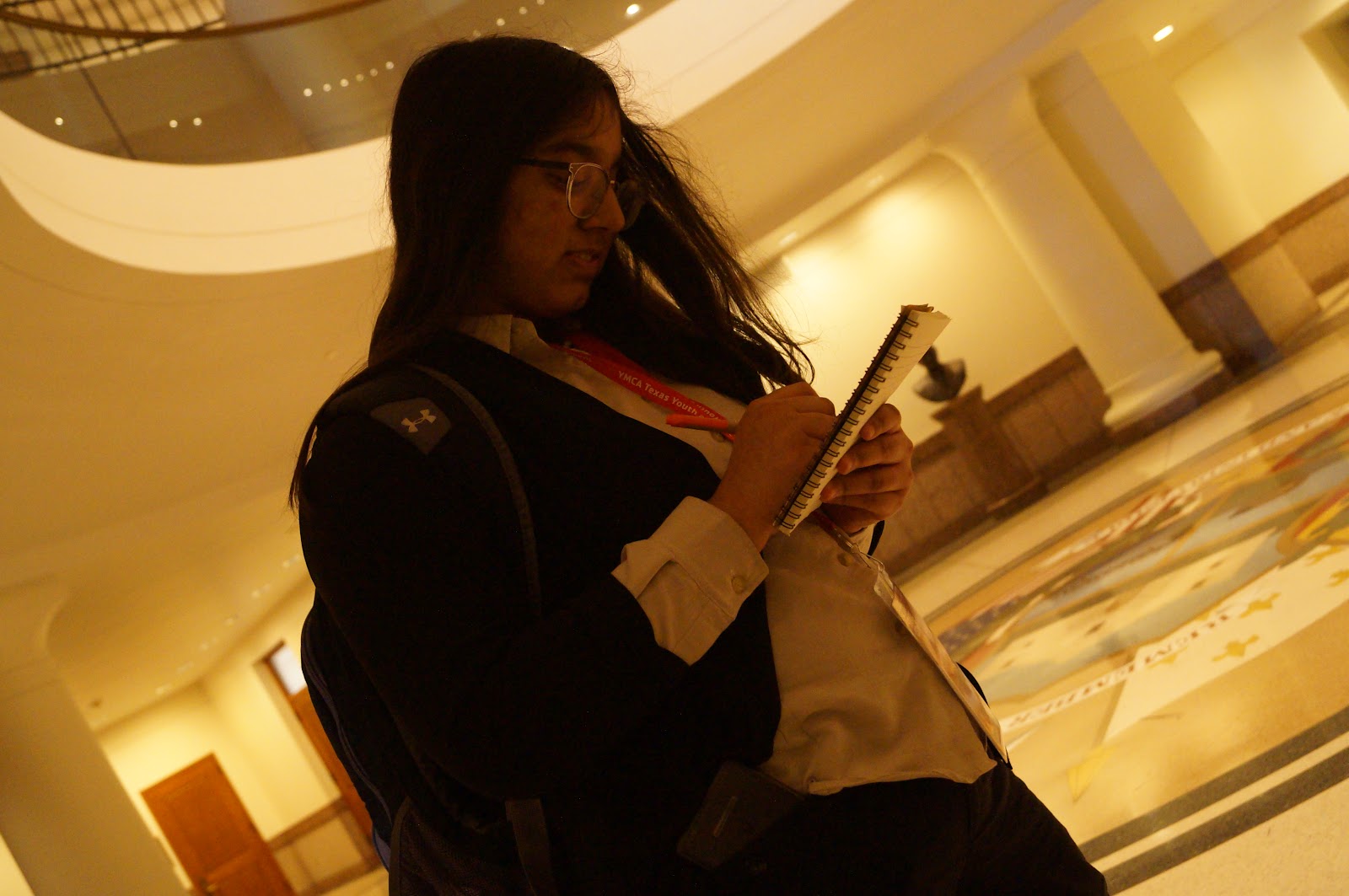 It may seem a bit vain, but I feel as though I should begin with my own story in mock trial. Now you may be thinking… Sam, you’re in the Media section, what possibly could you have done with mock trial? Well, that’s where I started my experience in Youth and Government. I began because a friend of mine had convinced me to join in order to improve my public speaking skills, I didn’t expect much from my experience other than anxiety. But admittedly, I was wrong, or else I wouldn’t be here for my third year. As a witness for my first two years I gained a lot of public speaking skills, and the motivation to just do my best, but not push so hard I burn out. I’m still unsure about my future career, but regardless, YaG has really assisted me in my social skills, as well as my skills in independence. 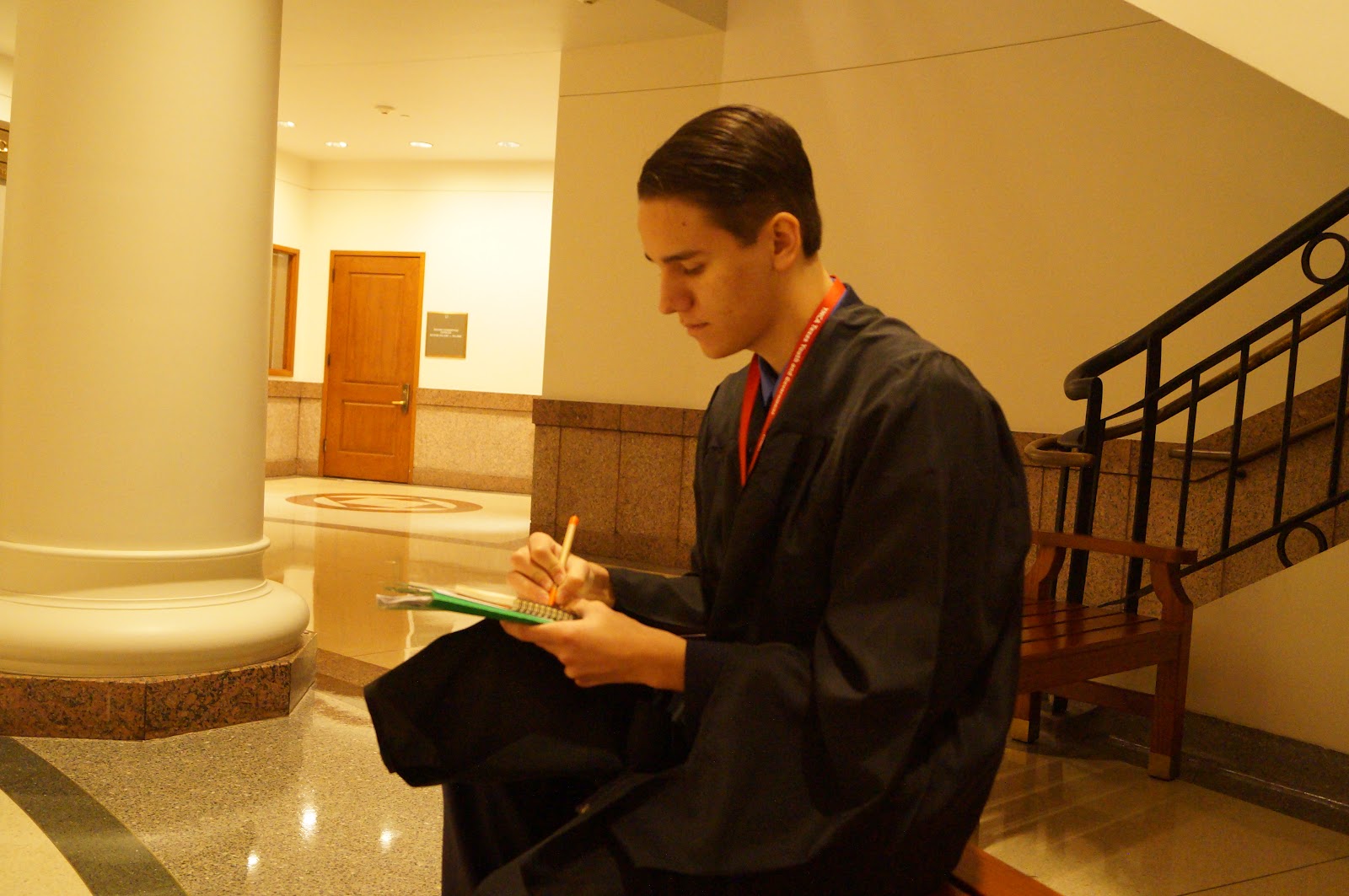 At the beginning of the day, I was a bit nervous. I didn’t feel bad about it since most people are before competition! But frankly, this time was different. I didn’t have much to do other than to just start talking. So, I approached this judge on his bi-round. His name is Moses, he’s been in Youth and Government for 4 years, all of them being in judicial. He started off as a witness, played an attorney for 2 years, and now, he’s a judge. When I asked him about how he found the club, he said that it was by accident. One day, he was simply wandering his school hallways for the French club, but instead of French, he stumbled into the Youth and Government meeting at his school. He ended up staying to try it out and loved it, as we usually do. He states he loves “the art of debate and politics” which is why he likes this program so much. He says that after he graduates he wants to “wing it” but politics is a likely career choice because of the program’s influence. 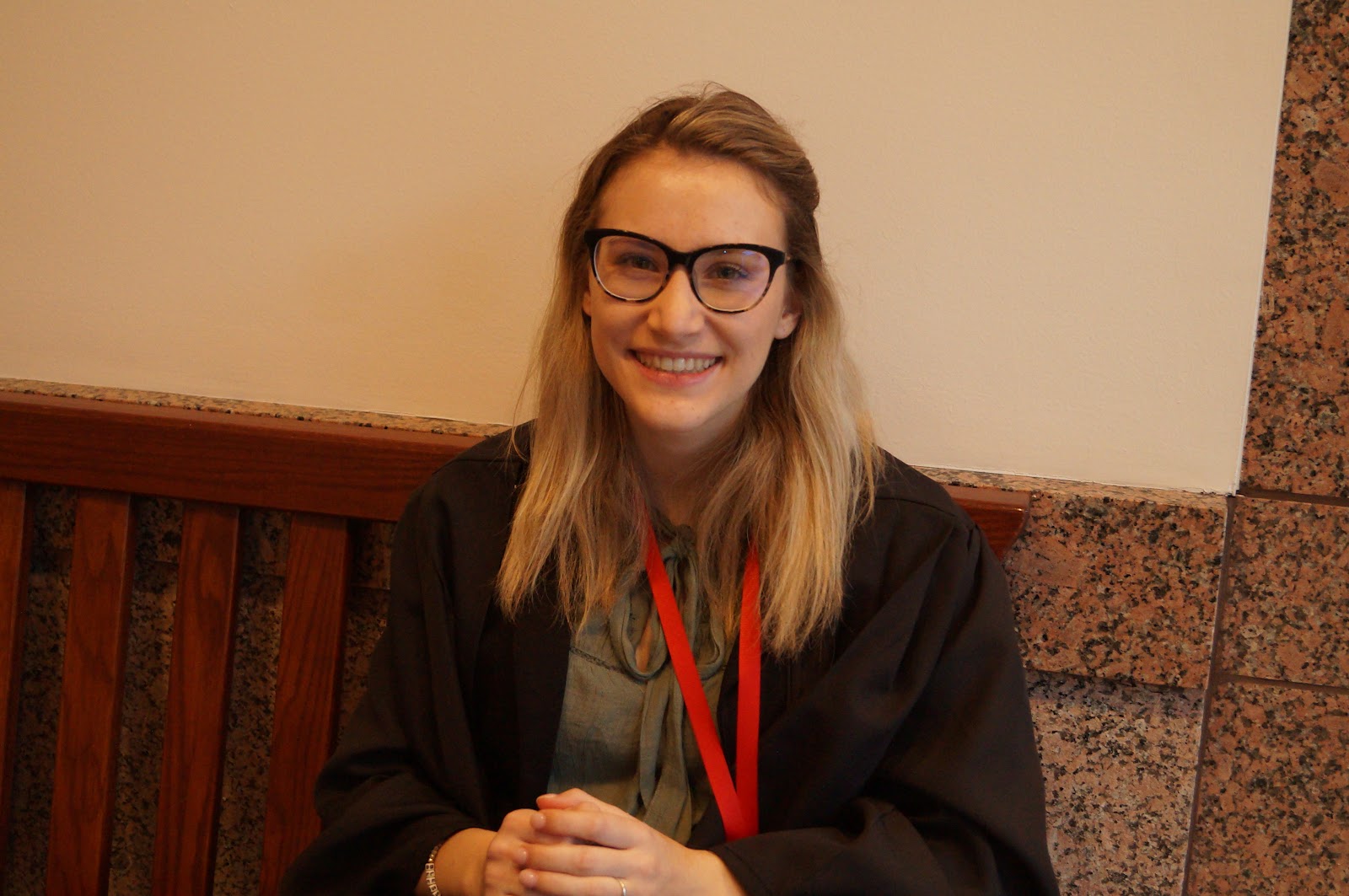 Mostly judges were on their bi-round during the first rounds of trials. This is Becka Steinnan, this is her 4th year and she is, as I mentioned before, a judge! She joined Youth and Government due to her community’s influence, she decided to try it out. She said that it “helped her feel more comfortable speaking and voicing her opinions.” Despite not planning on going into the law-type careers rather, med school, she still says Youth and Government’s influence stays with her. She says it’s very useful in the sense of dealing with interviews and public speaking in general. 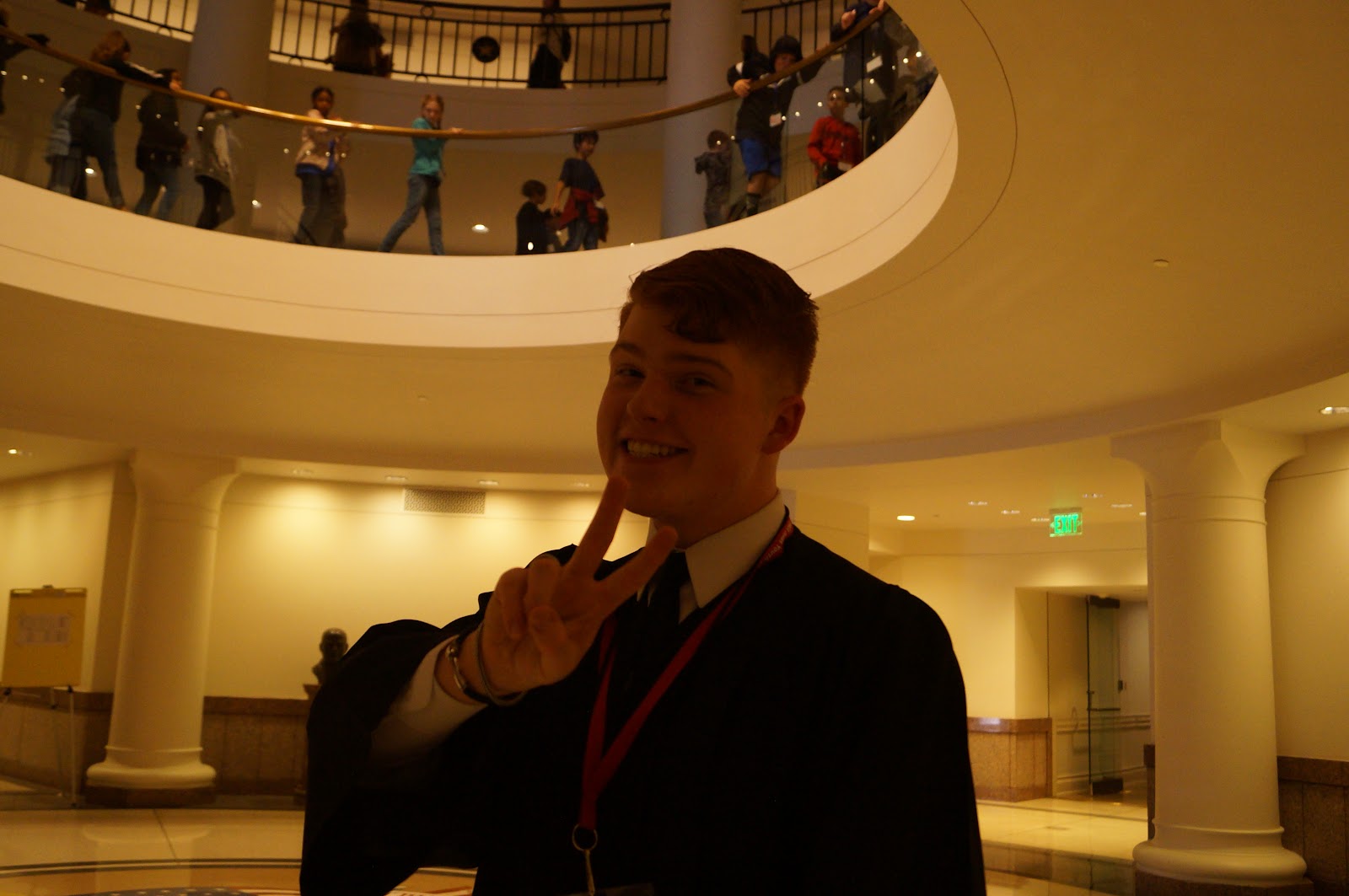 Many of you may know his face thanks to the opening ceremony yesterday, but in case you don’t, this is Skyler Stanridge! He’s currently a judge and candidate for Attorney General, and his 5 years of experience in Youth and Government certainly make him very qualified. Not to mention his unimaginable charm! He sat and talked to my trial team and I, which is how I was actually able to get an interview with him. He seemed super busy. He joined Youth and Government through an informational meeting at his school, and stuck with it ever since! He’s been in nearly every branch of the program but loves judicial and mock trial specifically for their creativity. From the way that the attorneys present the case, to the fact that none of the cases are the same, he loves it all. He feels as though this program has greatly impacted his life for the better. Because of it, he wants to be a federal court judge and says that this program gave him great experience for that career. After all, as he says himself, “you can’t buy experience.” 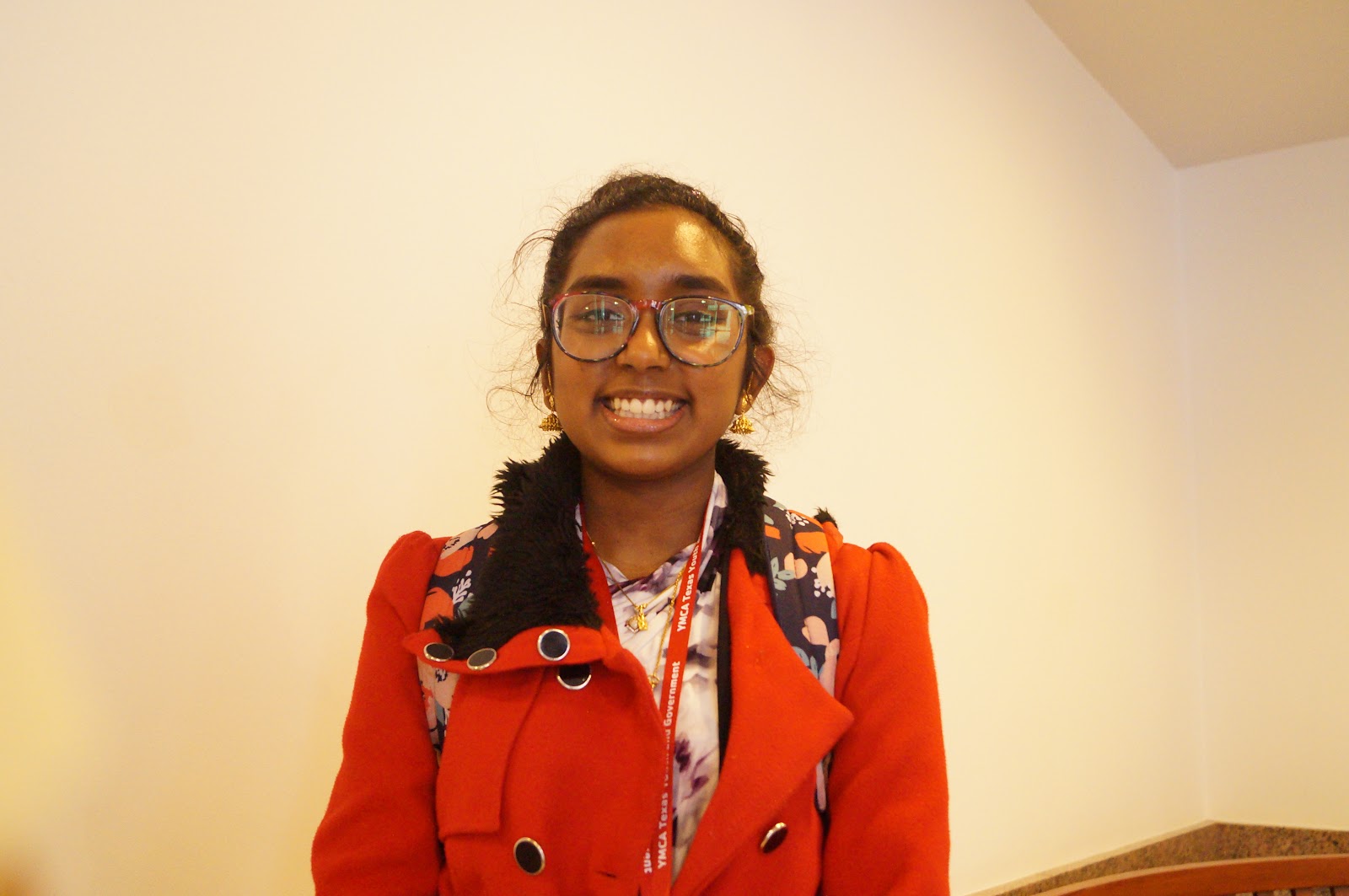 Now I found attorney Sruti Ramachandran while I was looking for Skyler Stanridge. He was judging for a round that she was in, and her intensity and fire drew me in. So, I did what any reporter would do… I interviewed her! This is only her 2nd year in the program, but her passion is very clear through the way she presents herself in the courtroom. She says that mock trial was a class at her school, and it was suggested to her by her counselor since she had an open slot in her schedule. Her favorite part of the job is to argue, she says it’s a lot of fun, and since she wants to go into law in the future, this program will obviously help her a lot. 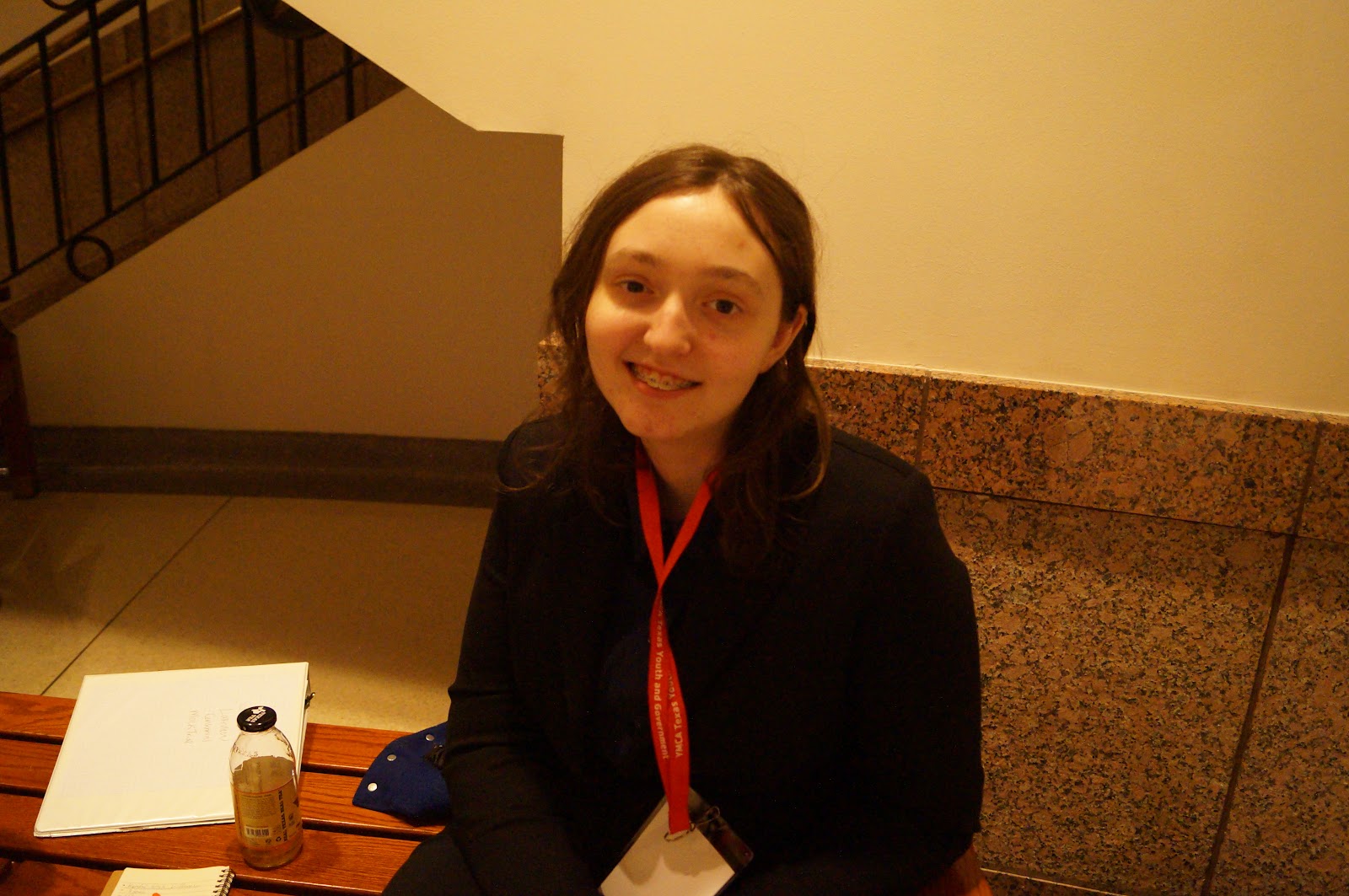 I know that interviewing friends isn’t exactly the toughest thing in the world but sometimes they have some really good insight. This is Juliette Walters, attorney for 4 years and professional nuisance. Not only to me, though, but to the witnesses she crosses as well. She’s been in Youth and Government for 4 years, all in the judicial section. Hopping from appellate to witness, then witness to attorney. This year, she had planned to be a judge, but due to some complications on the team, she once again took up the role of attorney. She joined initially because she wanted to be a lawyer, and expected to get some good experience from it, and she was right! That’s exactly what she received from this experience. She says it’s the “best program for this sort of experience,” and the “best one she could have joined.” 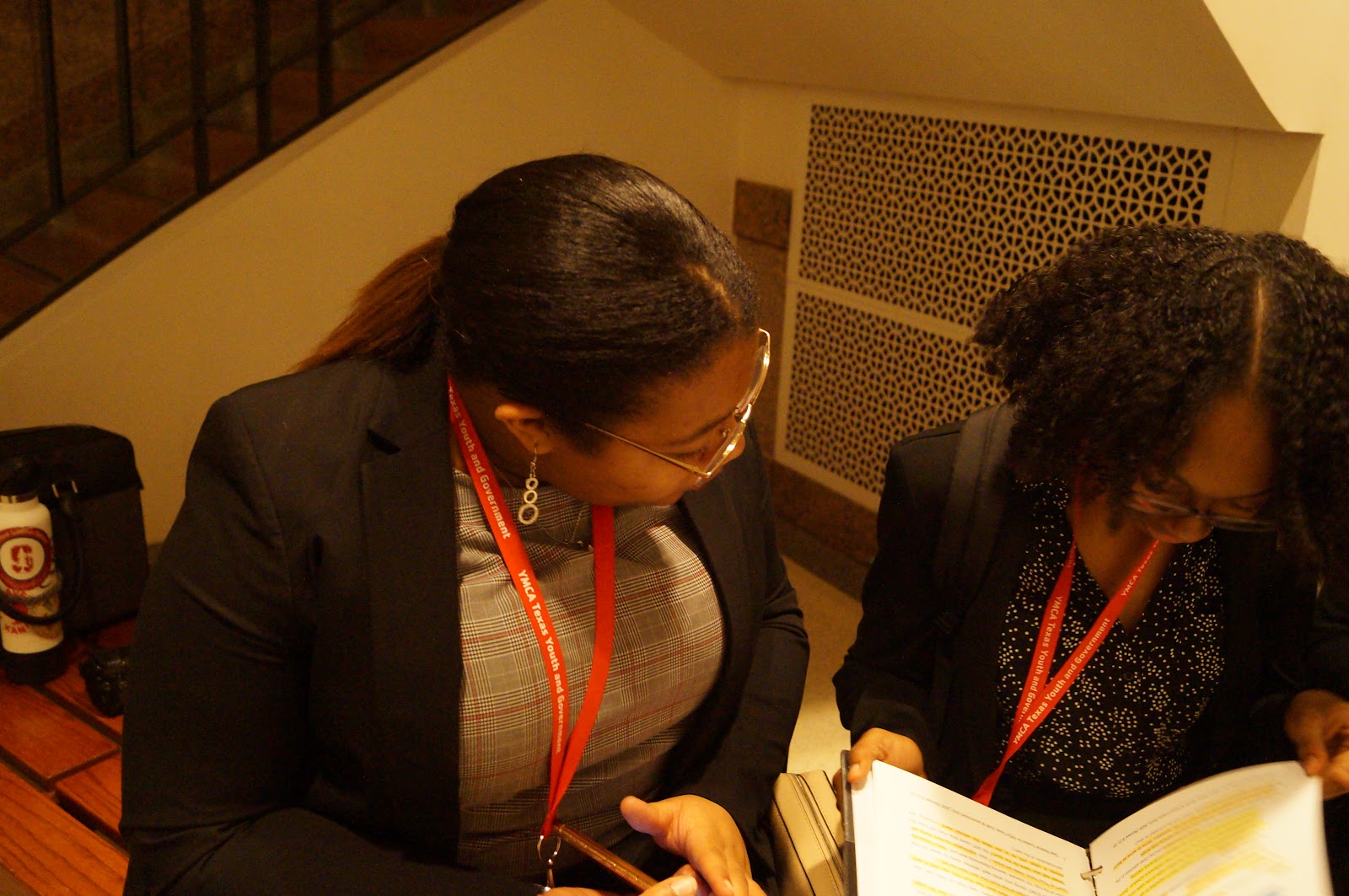 This is Kendal-Leigh Williams. Frankly, I don’t know much about her, but I’d like to know a lot more. Unfortunately, I wasn’t able to in this interview, but I tried my best. She’s been in Youth and Government for 3 years, and is now playing a witness on the mock trial team. She originally joined the club because she wanted to be able to get experience to get through law school. She’s planning on doing child psychiatry, but the effects of Youth and Government will absolutely help her in the future. According to her, she was “able to grow social skills and learn to talk to people in professional settings.” 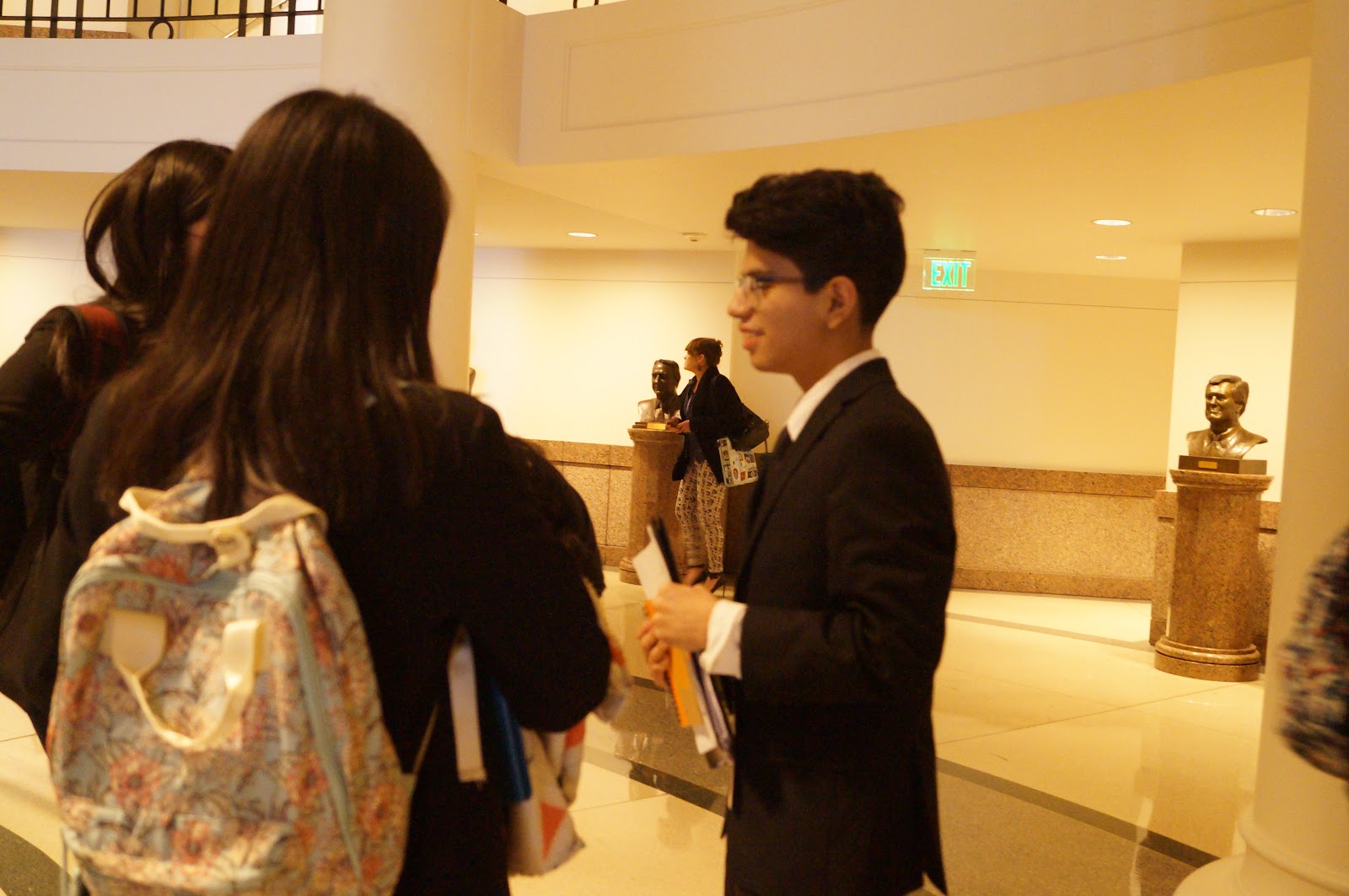 Lastly, but certainly not least, we have Sebastian Solitaire. He was the brave volunteer who stepped up to face my interview after I asked his trial team if I could conduct one. This is his 1st year in Youth and Government. So honestly, the fact that he could even talk to me is a great thing all by itself. He plays two roles, one of the prosecution attorney, and two, a defense witness. He initially joined to improve his public speaking, but enjoys the way that YaG is set up, along with the role that he was assigned to play. He says he’s going into computer science, which may not be a related field, but says that the leadership skills he’s learning will definitely help him a lot in his future career. 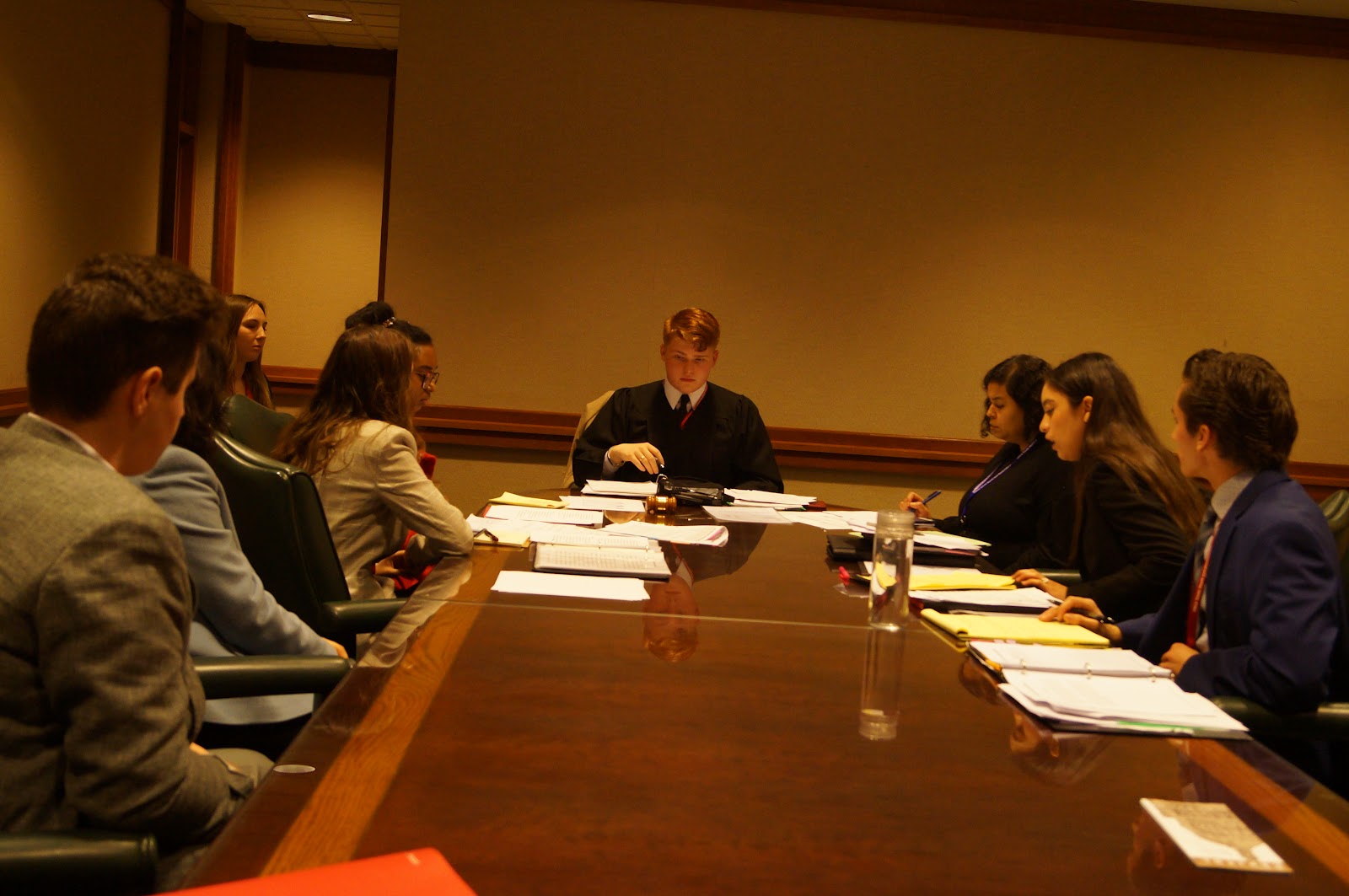 People get intimidated at the thought and the idea of a mock trial. It’s stressful, it’s hard work, and everyone there wants to be a lawyer. After all, they’re so intense, why join at all? Well, here’s why. All these different people with different stories. Whether they joined by accident, or because they were actively searching for a way to better themselves when it came to knowledge of the law, everyone here is different. Not one person here has had the exact same experience as another. But one thing they have in common is that they don’t regret it. Because at the end of the day, it’s a good experience. Looking back, it’s always fun. Honestly, that’s all I can hope for when it comes to the current delegates, as well as the future delegates. It may not seem easy now, you may feel scared, nervous, maybe even like you want to quit. But you will get through that opening statement, you will portray your witness well enough, you will get those good scores. But most importantly, you will enjoy this experience. Just like all of the people you’ve seen in this photo essay, you will enjoy the experiences you go through here. I promise.