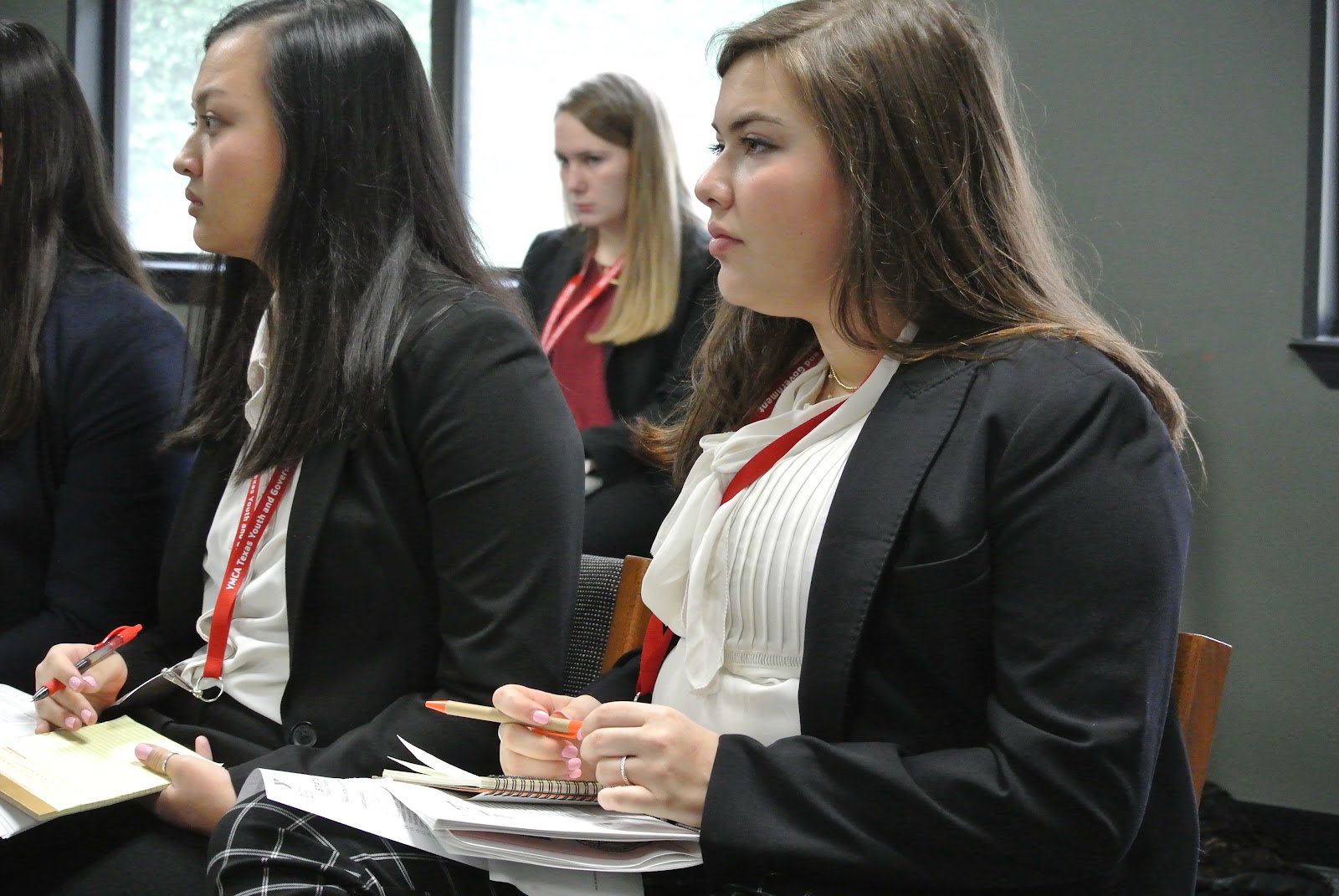 Delegates Sophie Robertson and Rachel Sobolevitch observe the first proposal of the day discussing the need for further police training in order to lower the number of police brutality cases in the United States yearly. This is their first state experience in SAF, along with delegate Bella Tiscareño. The team also participated in the Youth and Government district SAF conference. Delegate Bella Tiscareño says, “it has been an amazing experience working with my fellow delegates on our proposal over the past few months getting it ready to be presented.” 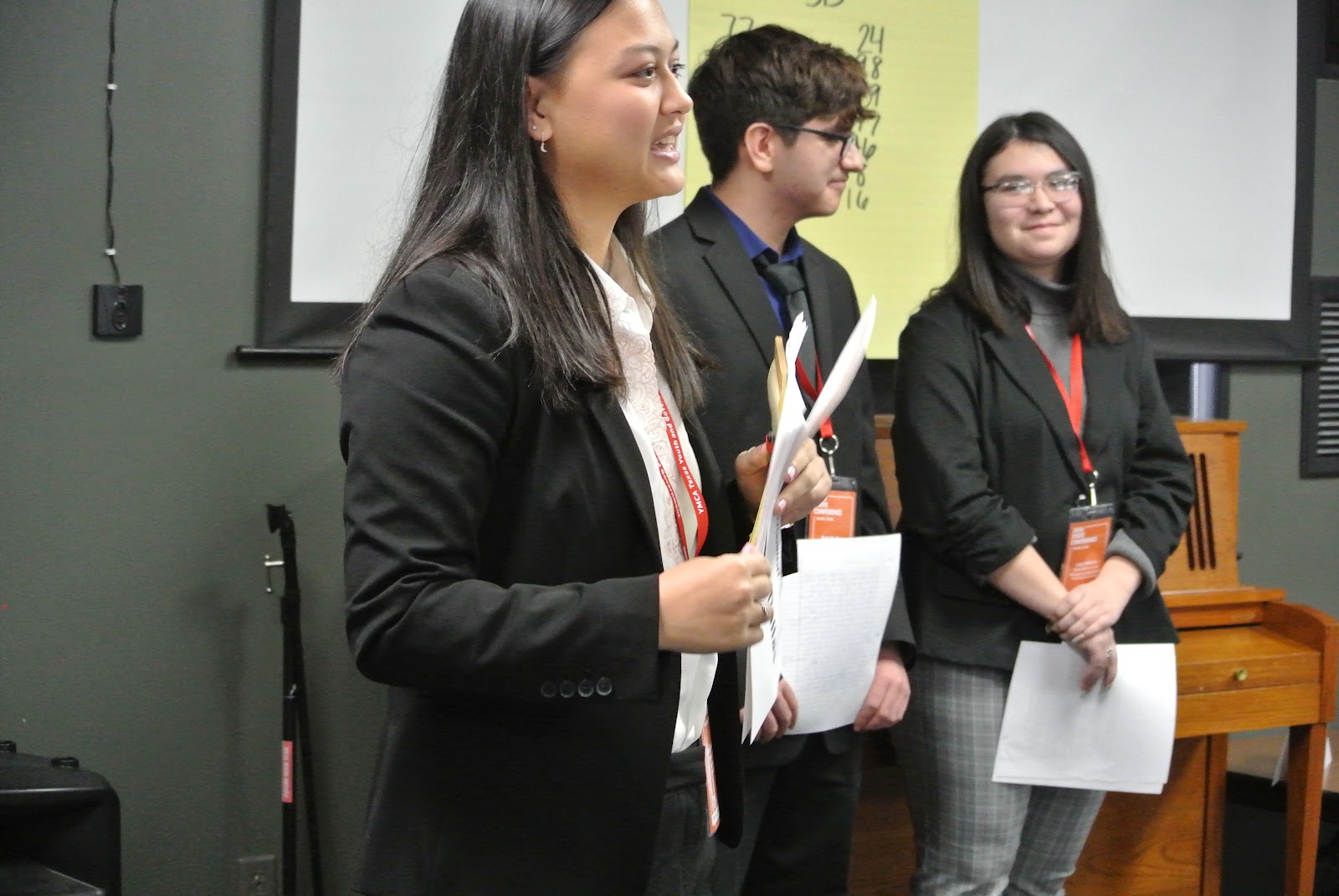 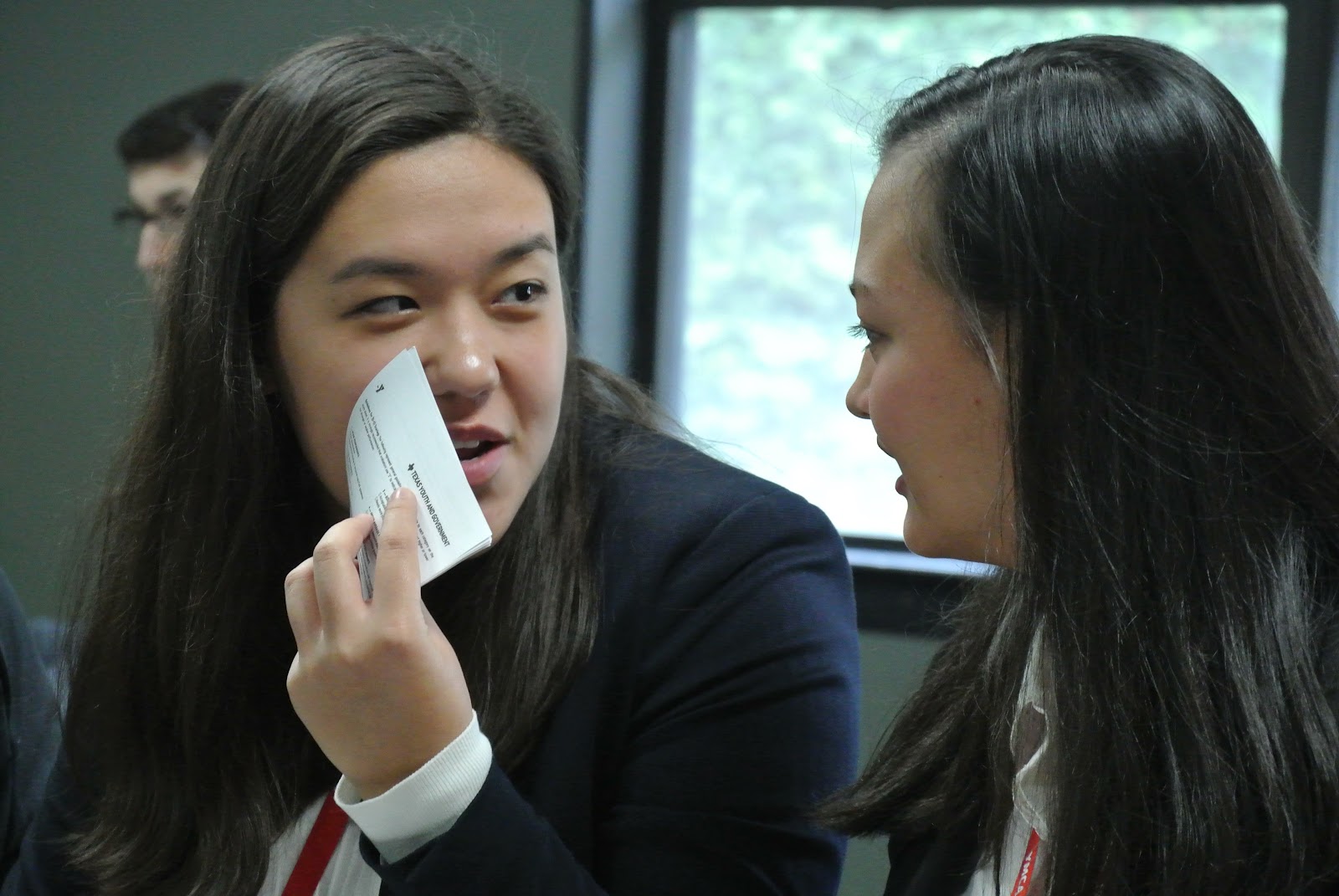 Delegate Bella Tiscareño discusses last minute changes to their proposal in between proposals with Delegate Sophie Robertson, catching last minute spelling errors and confusing, unnecessary words that may hurt their presentation or invalidate their proposal. 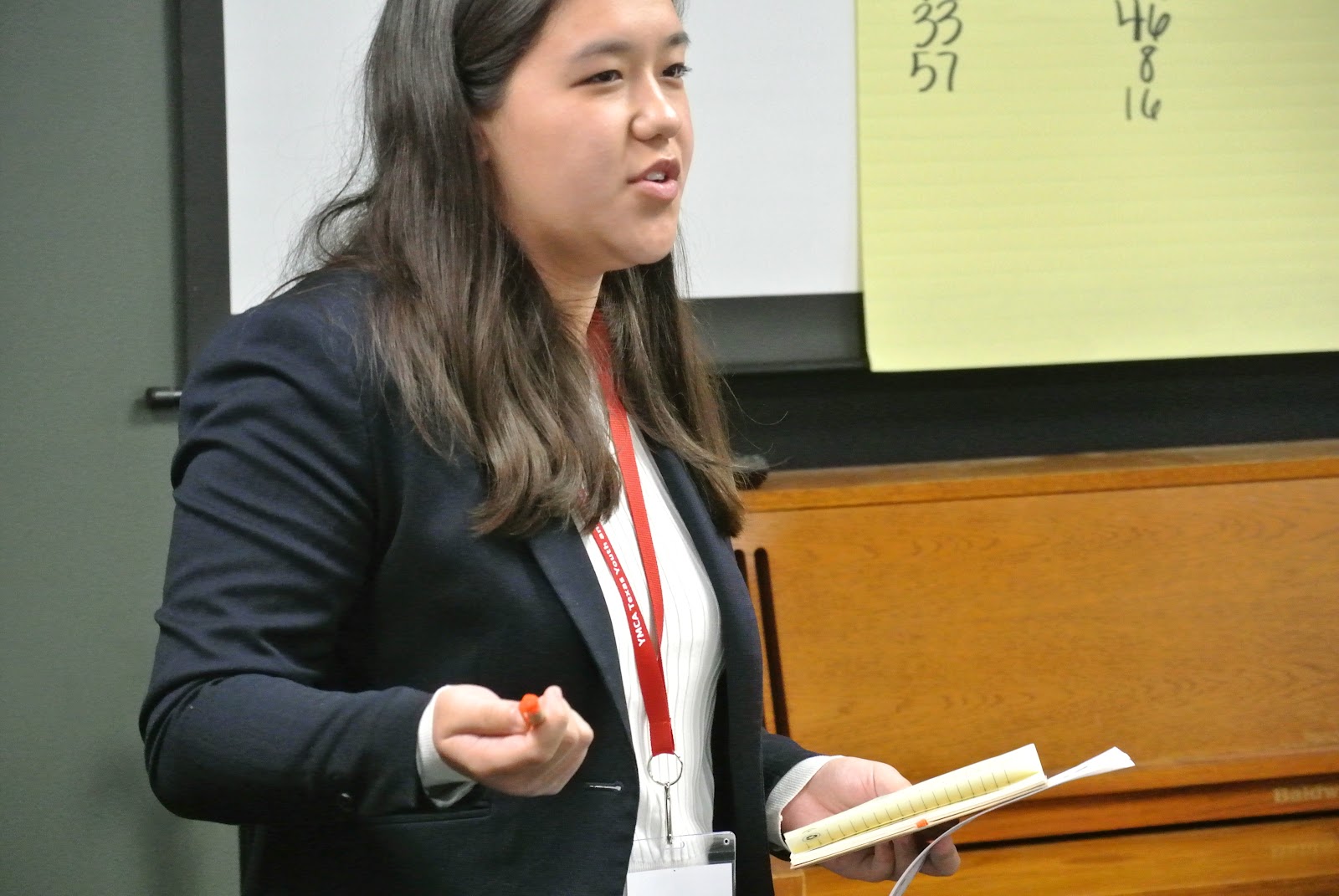 Delegate Bella Tiscareño speaks con against the second proposal discussing the legalization of mitochondrial replacement in embryos stating that, “it is unethical and we have no way of knowing how the affected children will turn out”. Tiscareño makes a clever retort to the author’s proposal, ultimately invalidating it. “I have prepared some evidence against multiple different topics that I feel strongly about,” Tiscareño stated, “and this happened to be one of them.” 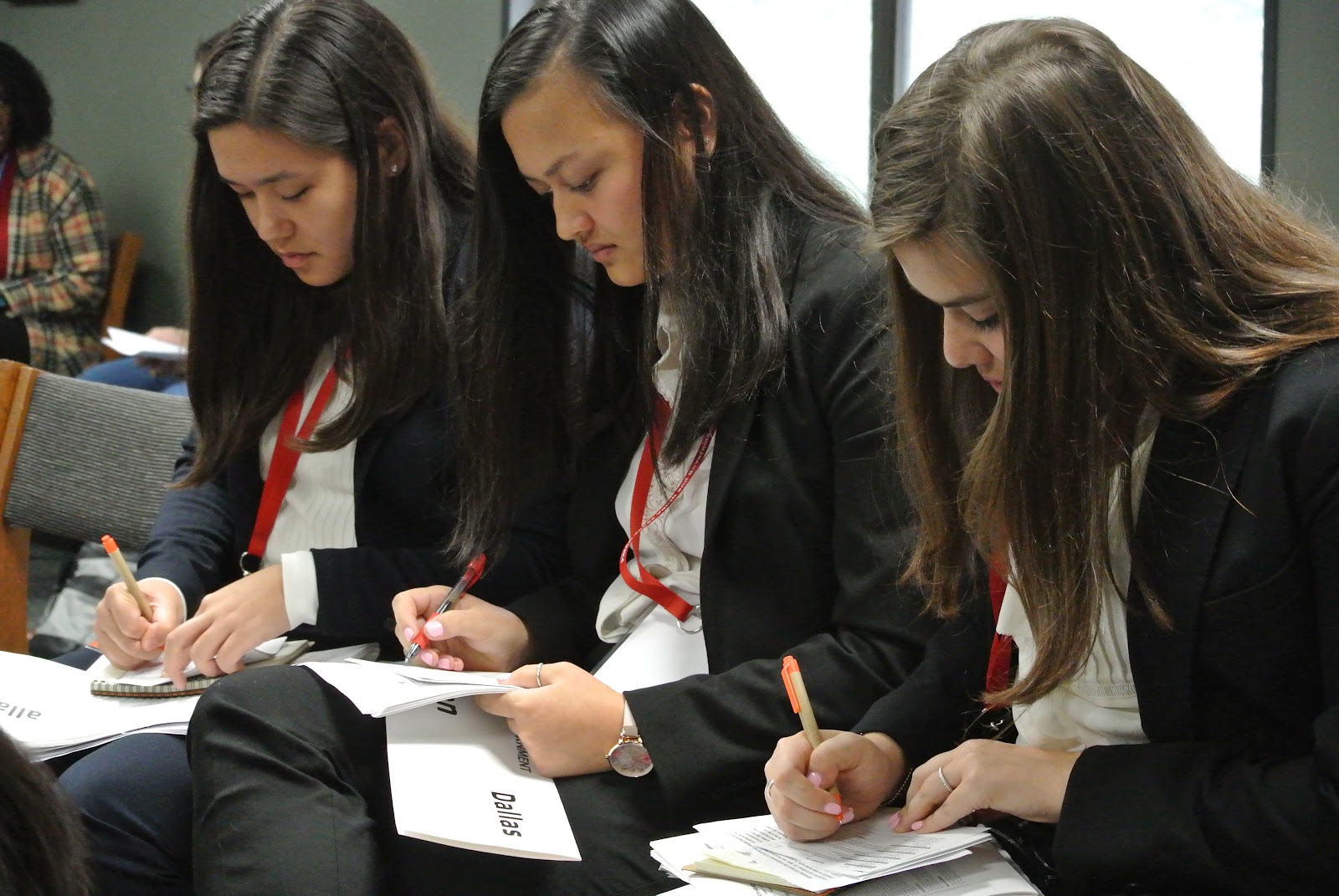 Delegates Bella Tiscareño, Sophie Robertson, and Rachel Sobolevitch prepare for their proposal discussing the importance of sex education in schools. The group has worked for months on their proposal, working to make it as strong as possible. “Our goal was to find one flaw in our proposal each week,” Delegate Sophie Robertson stated. “Every meeting someone on our team would speak con on the proposal at hand and they would try to invalidate it, and then we would find a solution so that nobody would be able to speak con on our proposal in said way.” 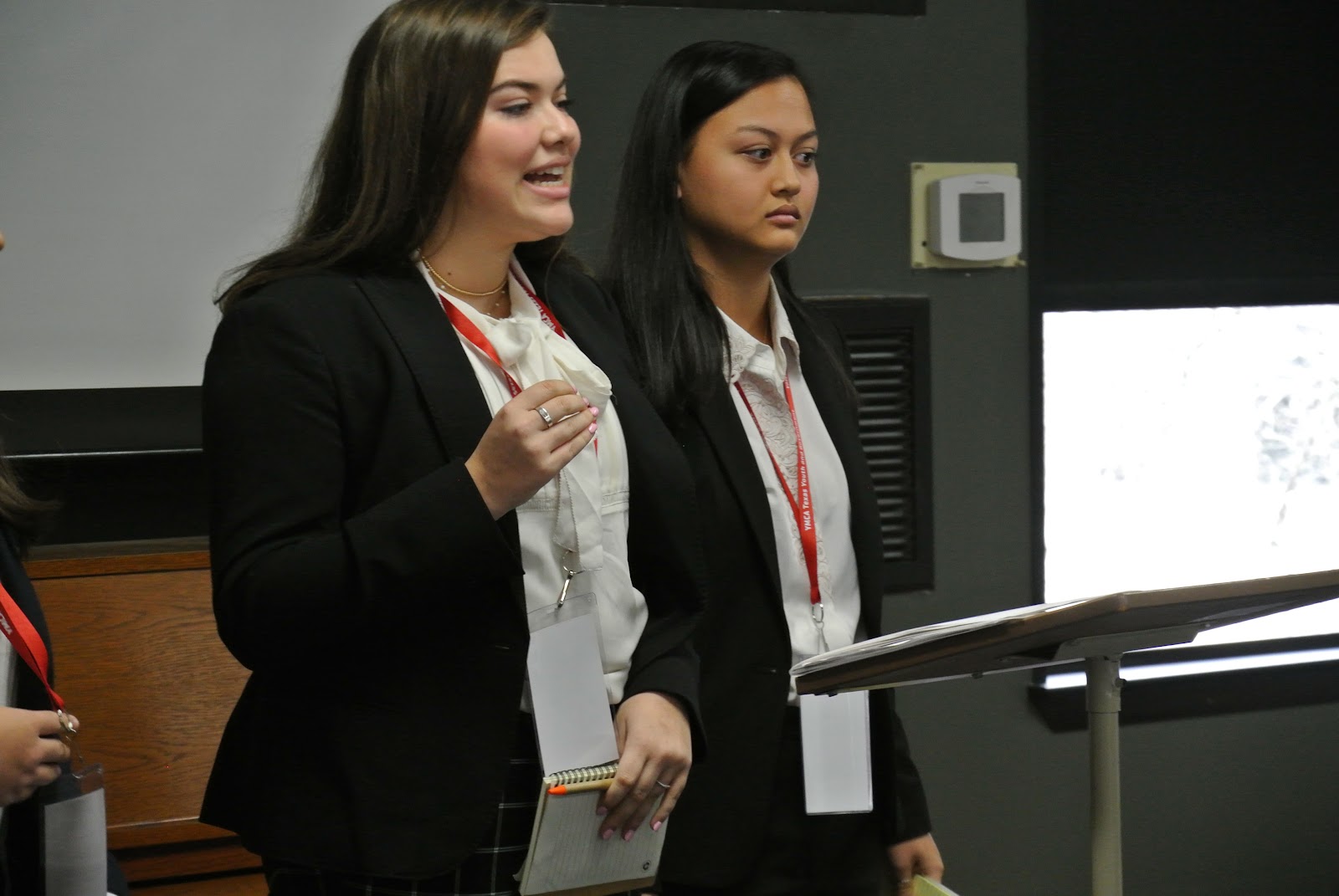 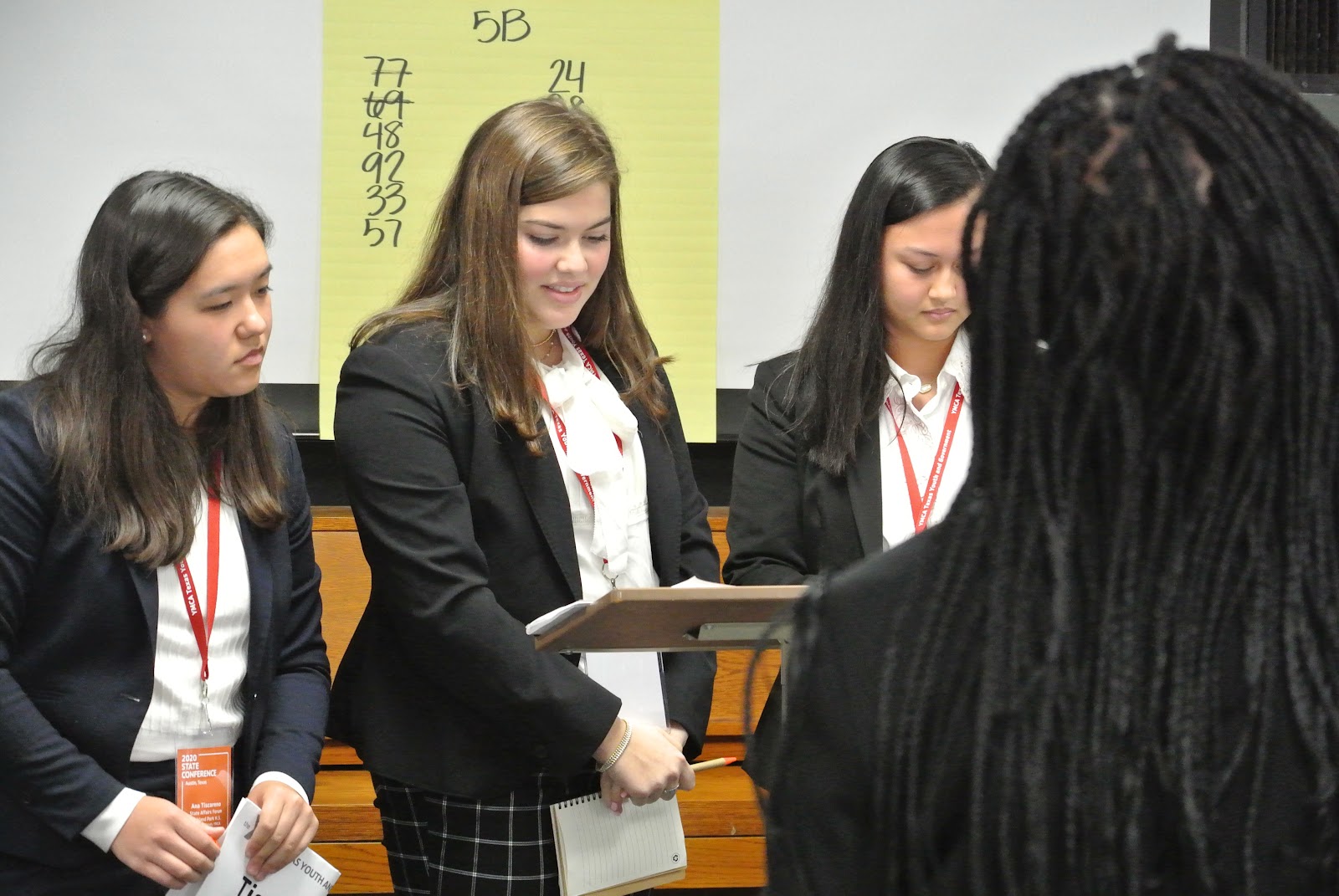 Delegate Bella Tiscareño, Rachel Sobolevitch, and Sophie Robertson are asked questions from a fellow delegate regarding their proposal. Their hard work each week seemed to have paid off, as they dodged tricky questions that would have otherwise hurt their proposal. 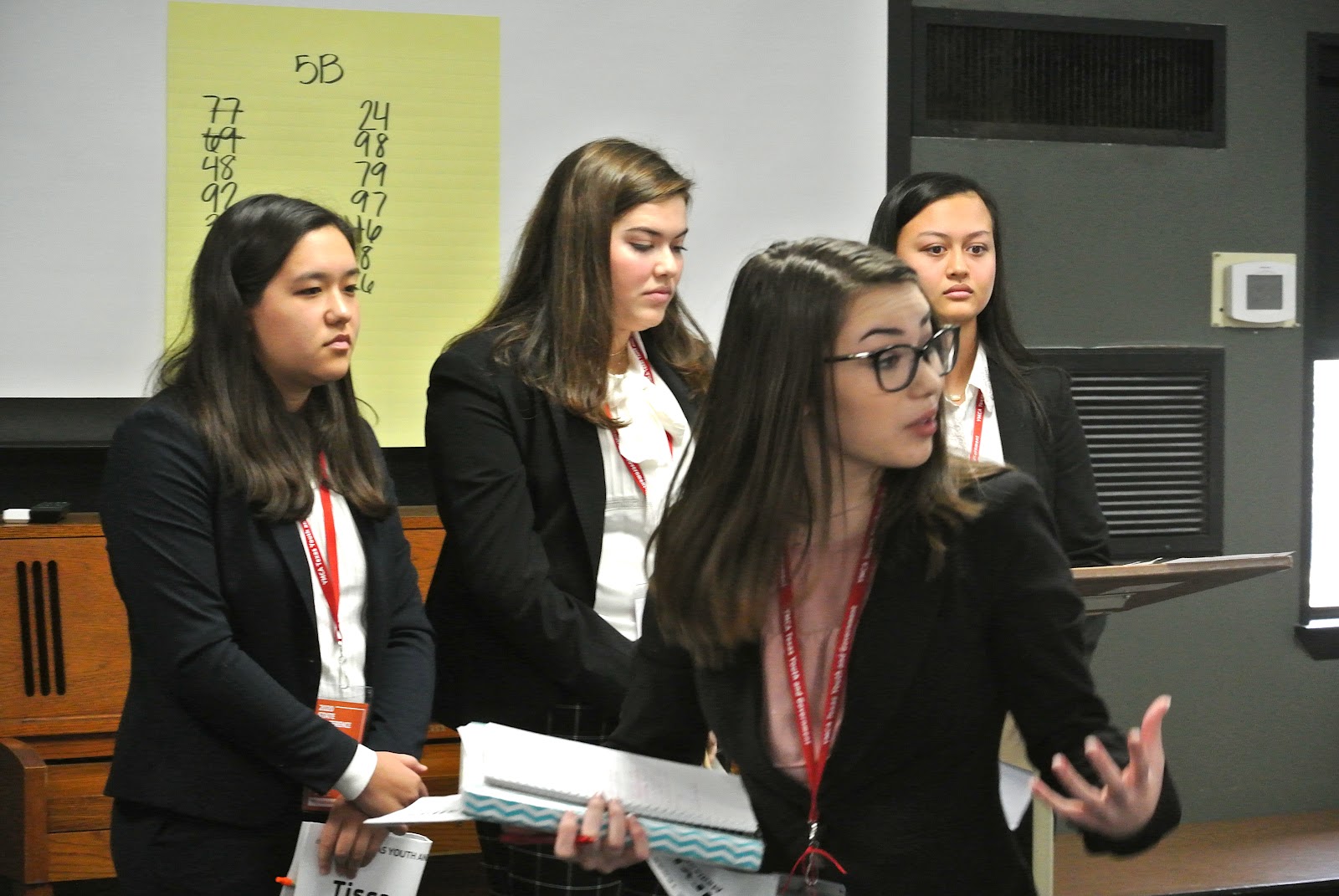 Delegate Irvin speaks pro on the proposal. This was very helpful for the team, considering that fact that Irvin has a reputation for making very smart, accurate, and clever statements speaking pro or con on a proposal. 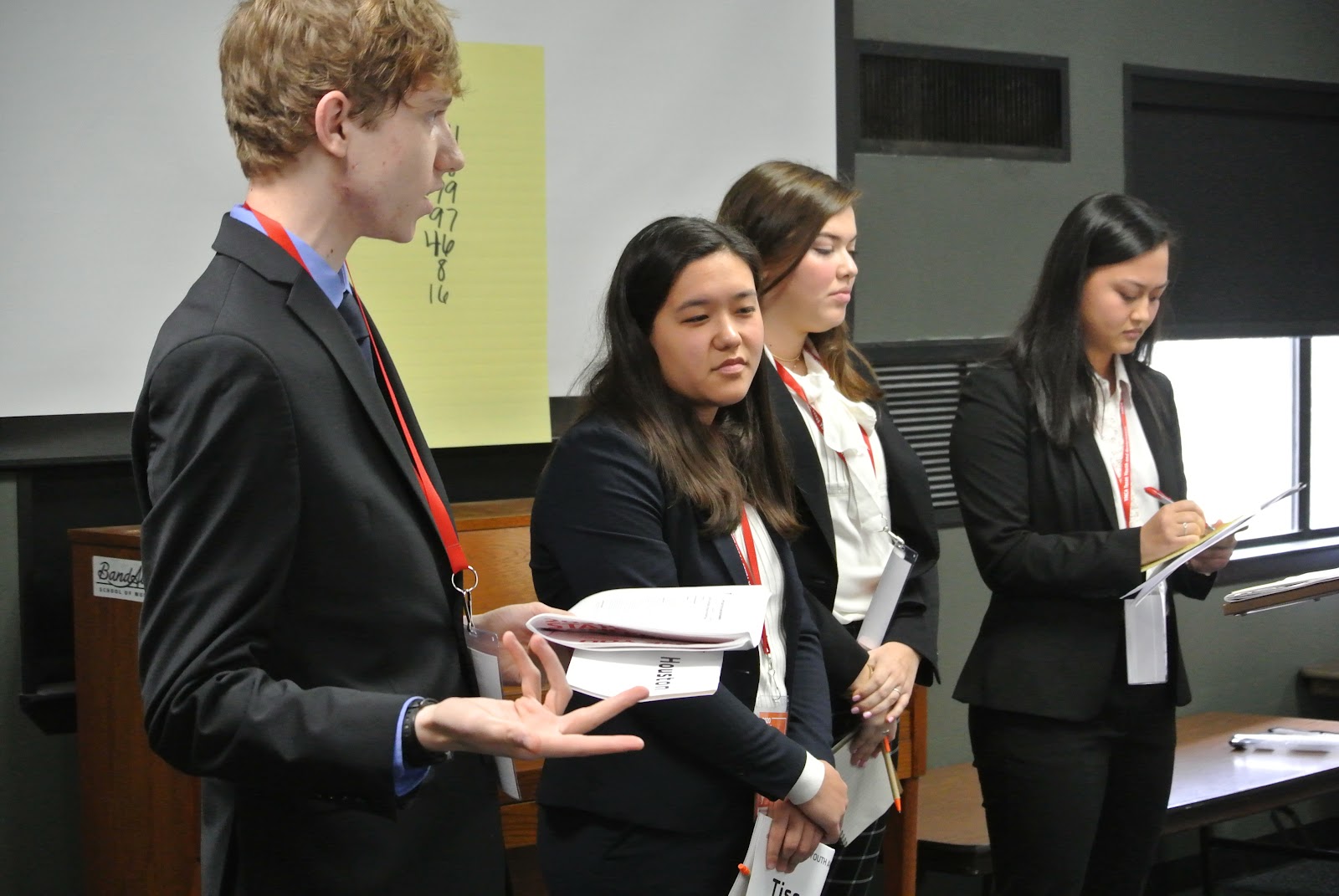 Delegate Druzbik acts as a con speaker and speaks against the proposal. From his perspective, “there is no proof that sex education programs actually affect sexual activity in teens and that these programs would be a waste of funding,” to which Delegate Robertson addressed in her closing statements saying that, “the purpose is not to stop sexual activity, but rather educate in order to prevent unwanted pregnancies and diseases.” 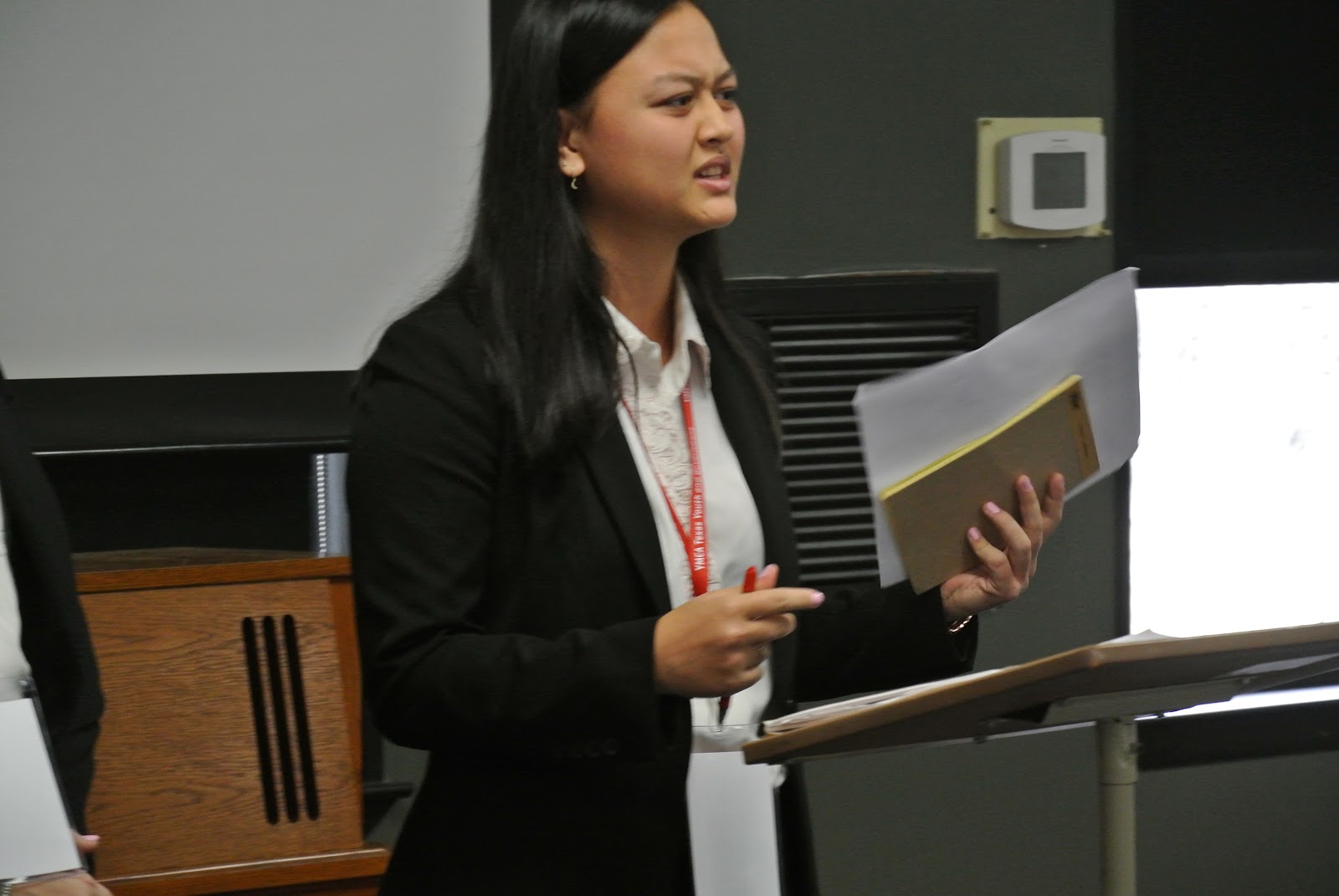 Delegate Sophie Robertson makes her closing statement stating that, “the proposal is in no way encouraging sex, only providing information for safe sex.” Delegate Robertson has worked for numerous hours on her statement, noting that it may be necessary to respond to remarks made by Delegates speaking con on her team’s proposal.