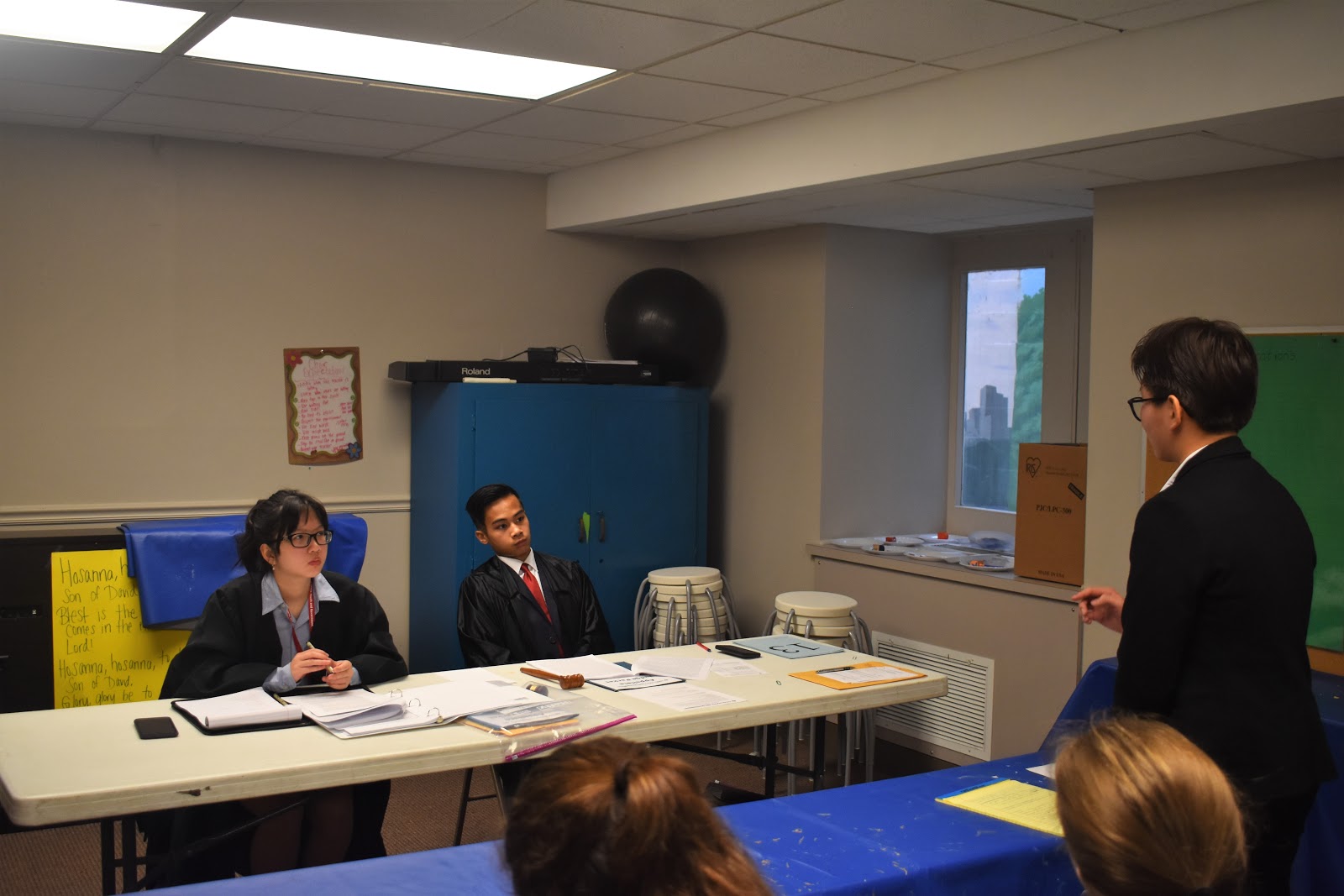 On the Appellee side, co-council Katherine Bi debunks the claims made by the opposing counsel that the lack of evidence, more specifically the traffic tickets, provided resulted in the jury being misinformed and misled. She says, “there is no definite way to prove that knowing of traffic tickets would have swayed the jury’s decision.” 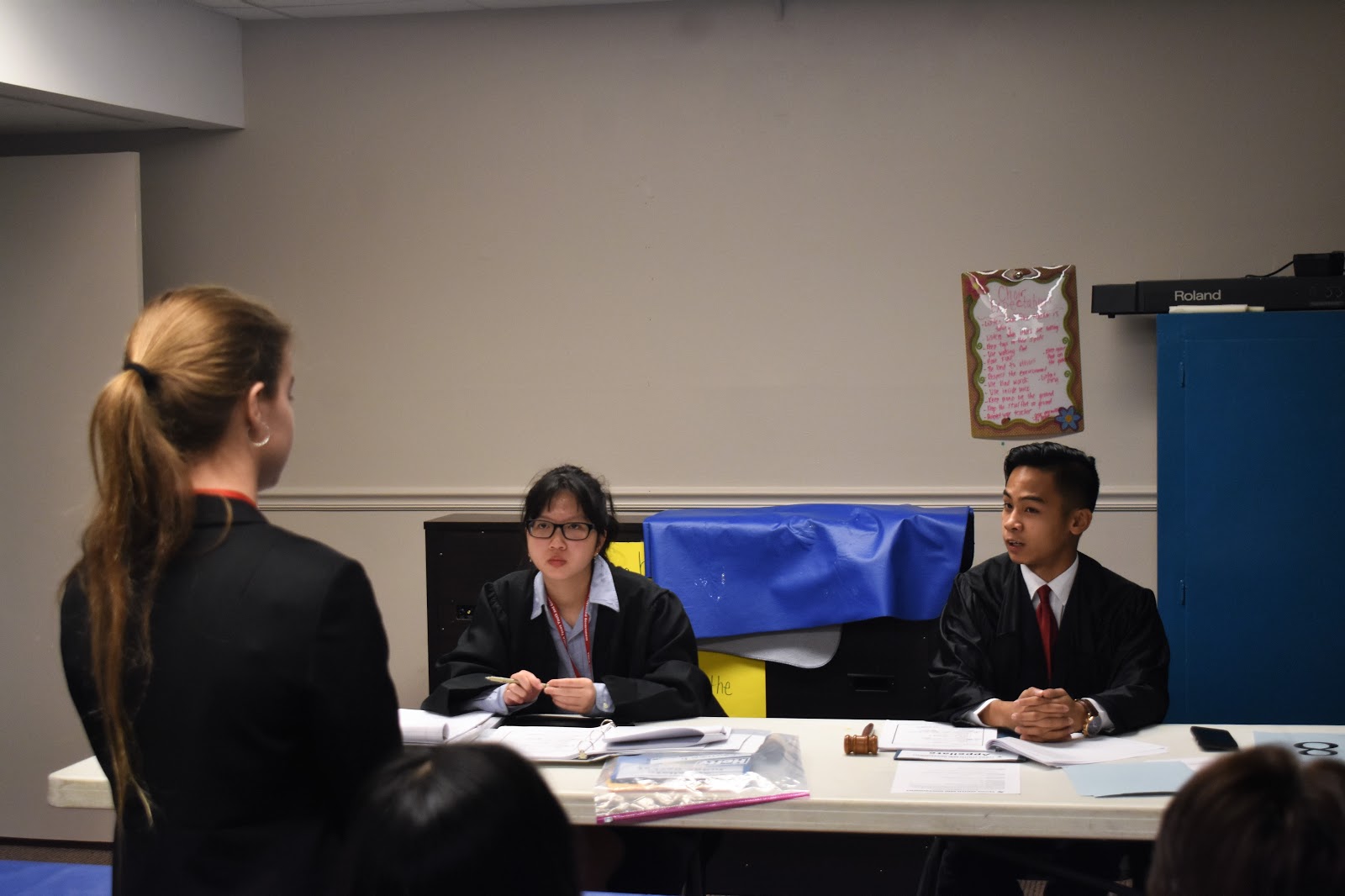 In the case of The State of Texas V. Tourrence Rush, co-council on the Appellant side gives her insight on the flaws of the decision made by the court. “There was, in fact, a clear error made in the jury’s decision.” As most Appellants do, the goal was to reverse the decision made by a lower court, in this case, a decision that pitted Tourrence Rush guilty of driving under the influence. 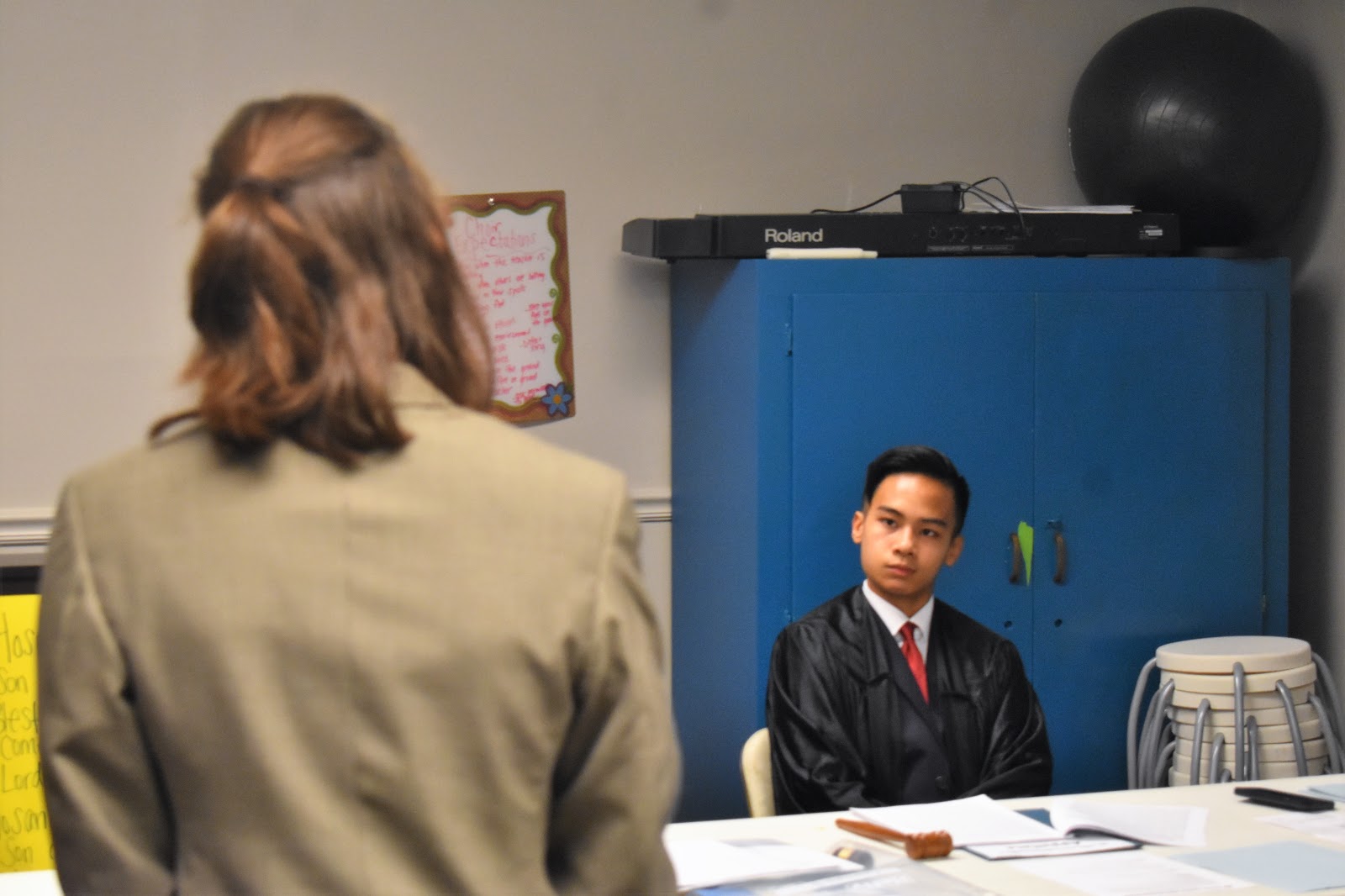 “Because the State did not give the information about Spokes’ previous traffic violations to the defense, they (the state) deprived them of the opportunity to assess how likely Spokes was to fight traffic laws,”Says co-council Collins. This statement supports the assertion that the jury “deserves the right to know about Spokes’ traffic tickets” as they would have played a factor in their decision on the verdict. The Appellant side made it a point in their main argument that without the defense having absolutely all the facts from the investigation of the original case, that there wasn’t a fair trial, and furthered that idea by providing the judges with specific examples that qualify that argument. 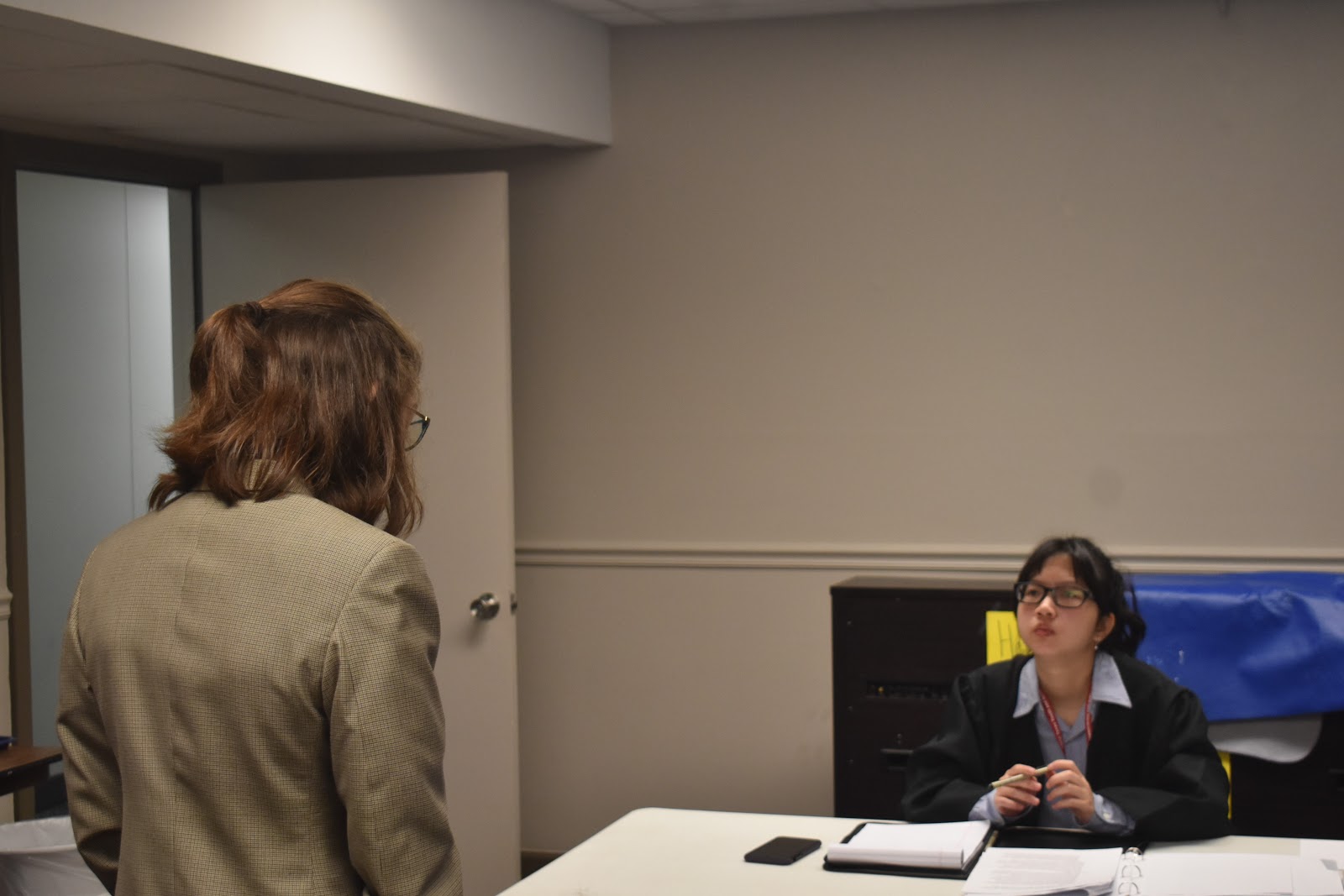 Campbell Collins, as the other co-council of the Appellant side, gives further reasoning as to why the verdict in Tourrence Rush’s case is questionable. As she touches on the flaws from members of the jury and their decision, the judge listens in closely as the lack of a jury puts all responsibility of a verdict solely on her. 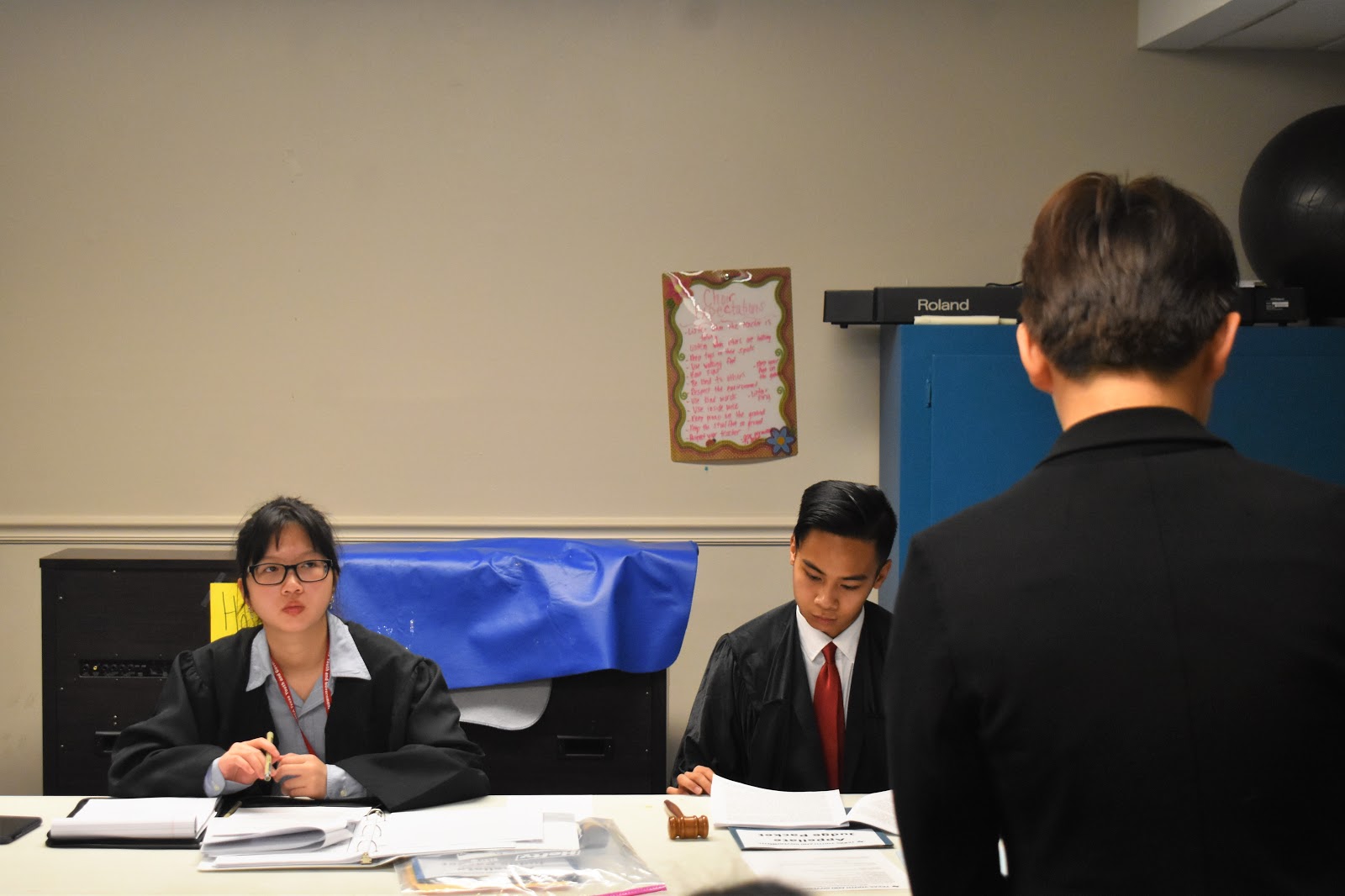 Another theme in the case was jury bias. Jury bias is a common problem in Appeals Court, where the Appellant side often feels that the reason of the ruling may have to do with some characteristics of the members of the jury, that could range from gender to ethnicity. To wrap up the first round of competition, co-counsel Bi states, “In conclusion, there is no reason to believe that the jury was selected based on race…..correlation is not causation.” Bi is aware that the opposing counsel believes firmly in this issue, yet she radiates confidence in disagreeing and taking her stance. 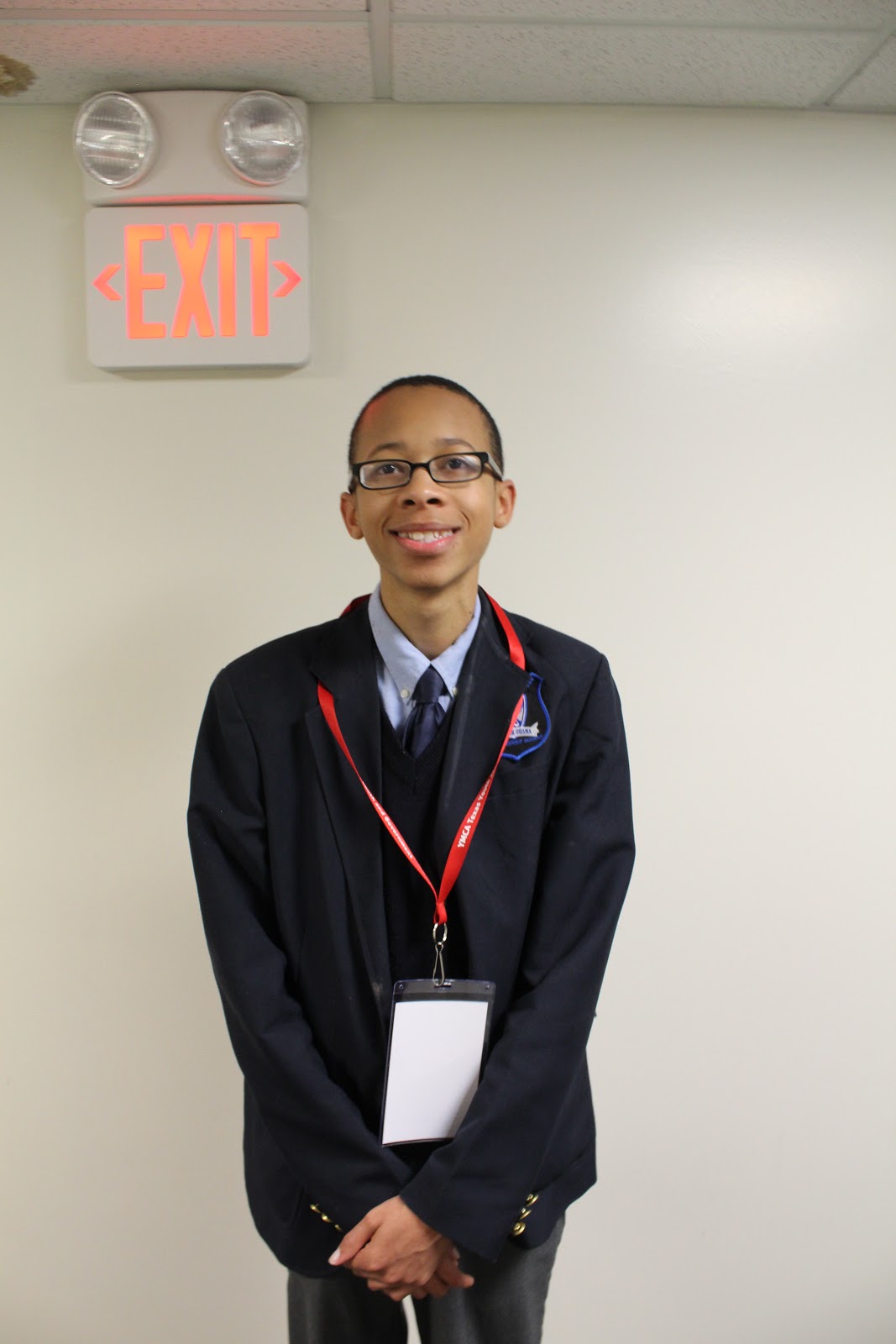 When asked what he wants to gain from the Youth and Government experience, first year Media Delegate Marcus Johnson says, “I really would like to gain a better understanding of how to write articles…..media outlets in the world, the newsplace, and modern politics is not really covered that much, and I feel like Youth and Government will give me insight as to how media affects people’s perceptions of politics in real life.” 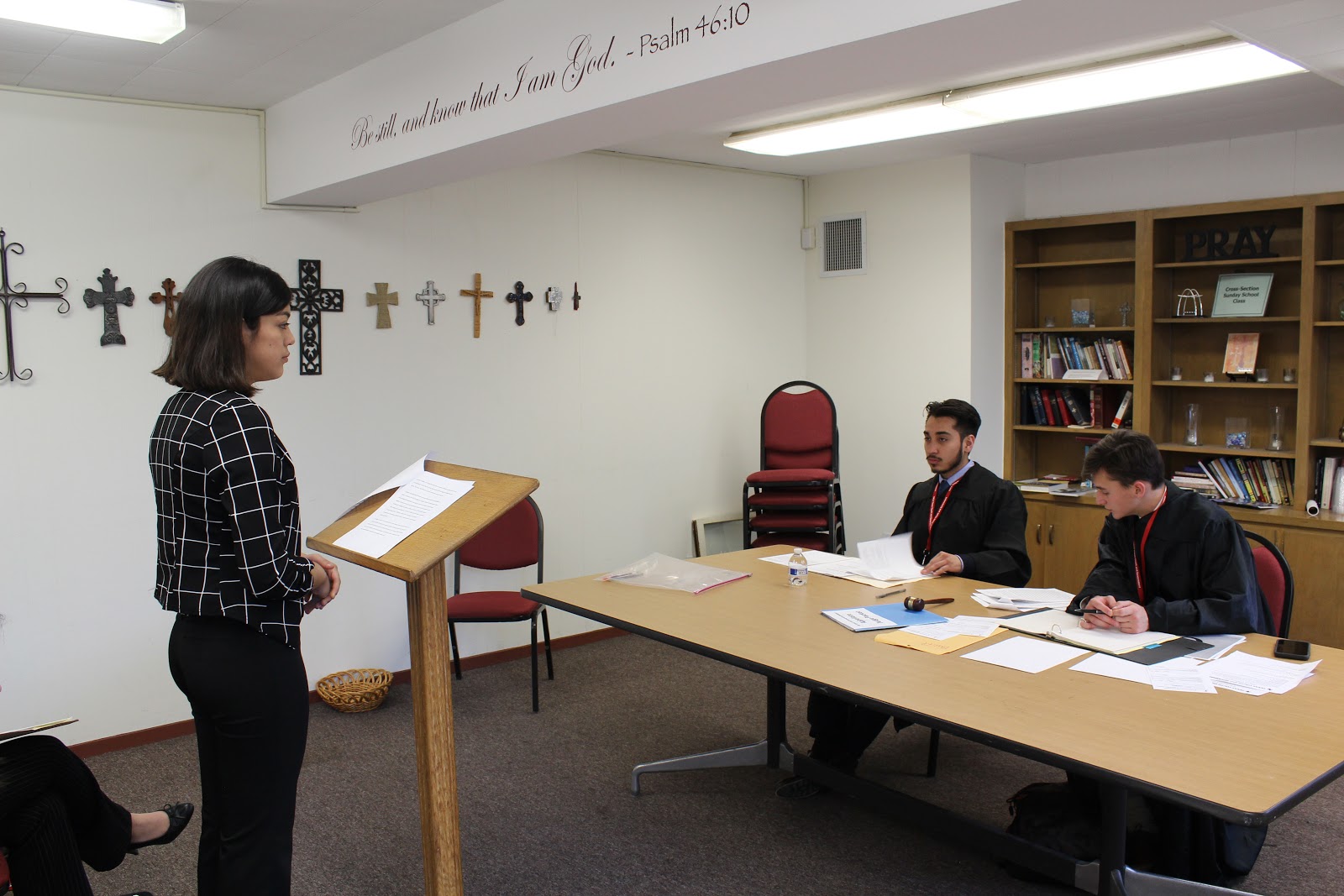 When asked what type of racial discrimination has been made against the jury, co-counsel of the Appellee side, Isis Garcia, explains how under Miller [Mississippi v. Flower] it states that “If two jurors have the same occupation that they both should be stricken, if one isn’t it does give rise to purposeful discrimination.” She further explains,  “Both juror number three and number seven were school teachers, however juror number three was stricken because she was an African American female, and juror number seven was a white male,” which goes to show that in the eyes of the Appelle side, there has been definite discrimination. 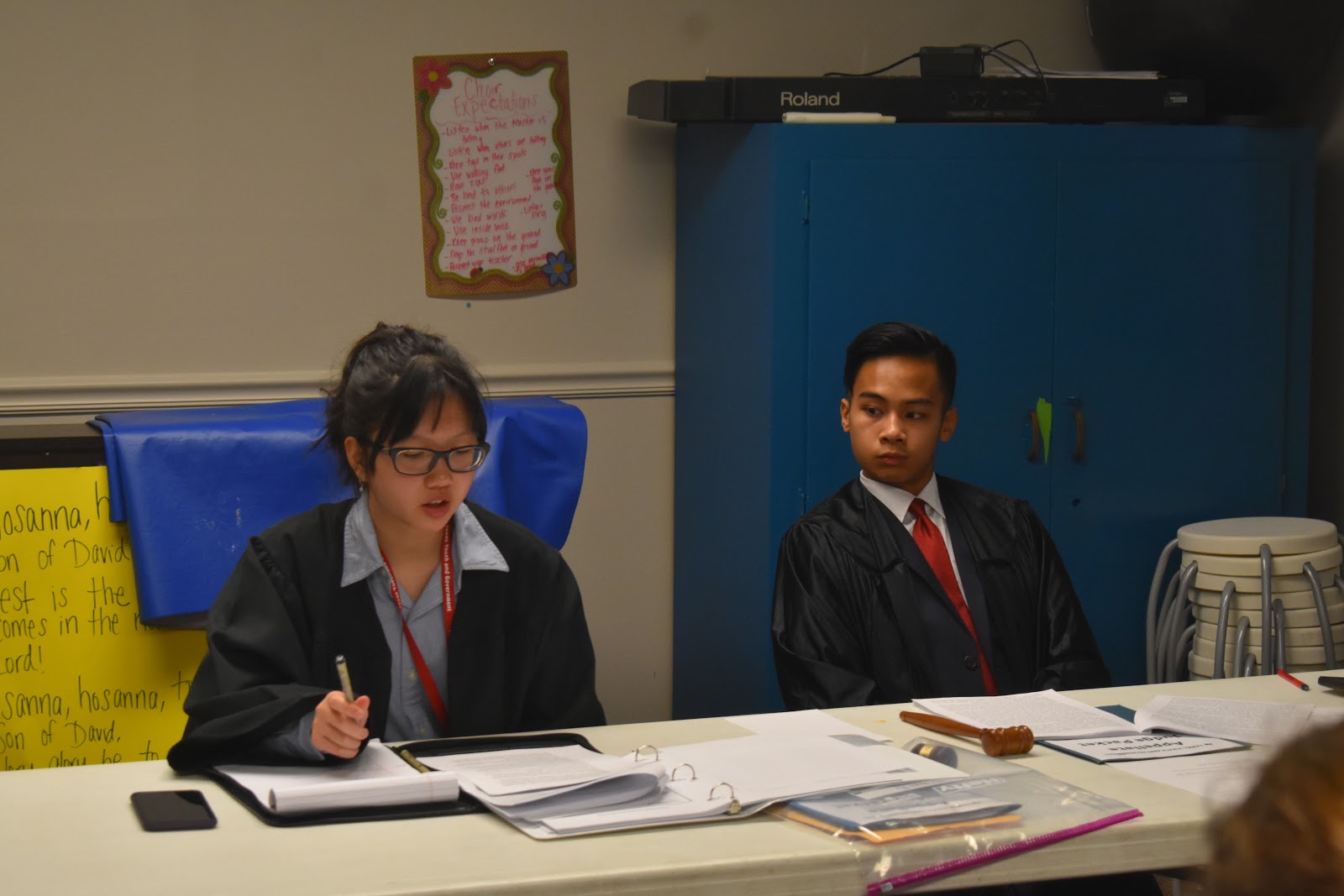 Being involved in a majority of the sections in YG, advancing in judicial multiple times, and having held office on separate occasions, Delegate Sebastiane Caballes (right) says, “The thing that excites me the most is that my peers, at a young age already engaged, are just so enthusiastic about being civilly minded people whether that’s through the law, legislation, or being a part of the media…just that wholistically is something im really happy about.” 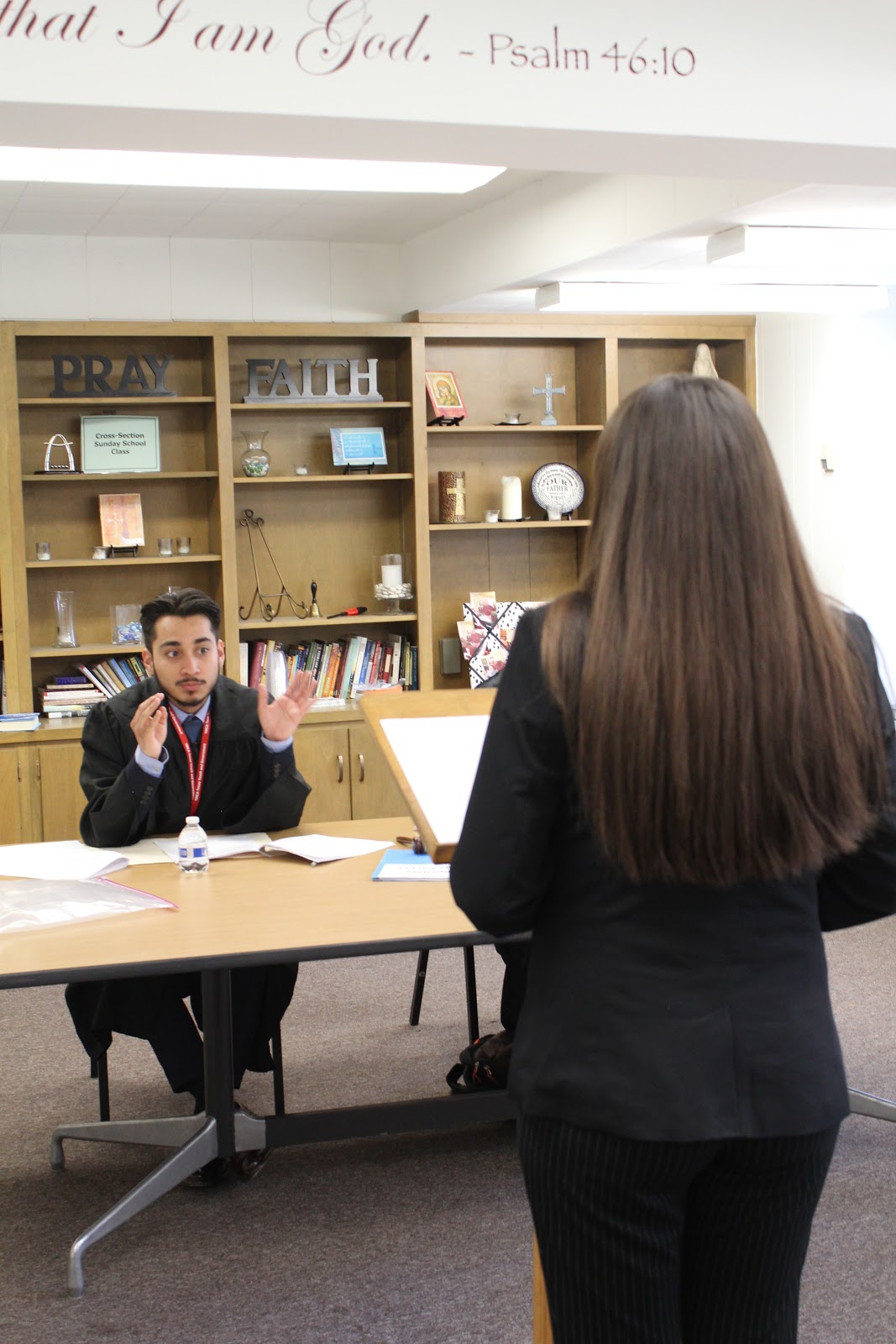 “Driving a bike makes you more aware, it makes you more alert because you’re constantly focusing on what’s around you. You’re not sitting down pressing a gas pedal and moving a steering wheel versus you using all of your motor function.” Here the judge is explaining to the co-council of the Appellee side how the victim getting a ticket has nothing to do with him riding a bicycle. 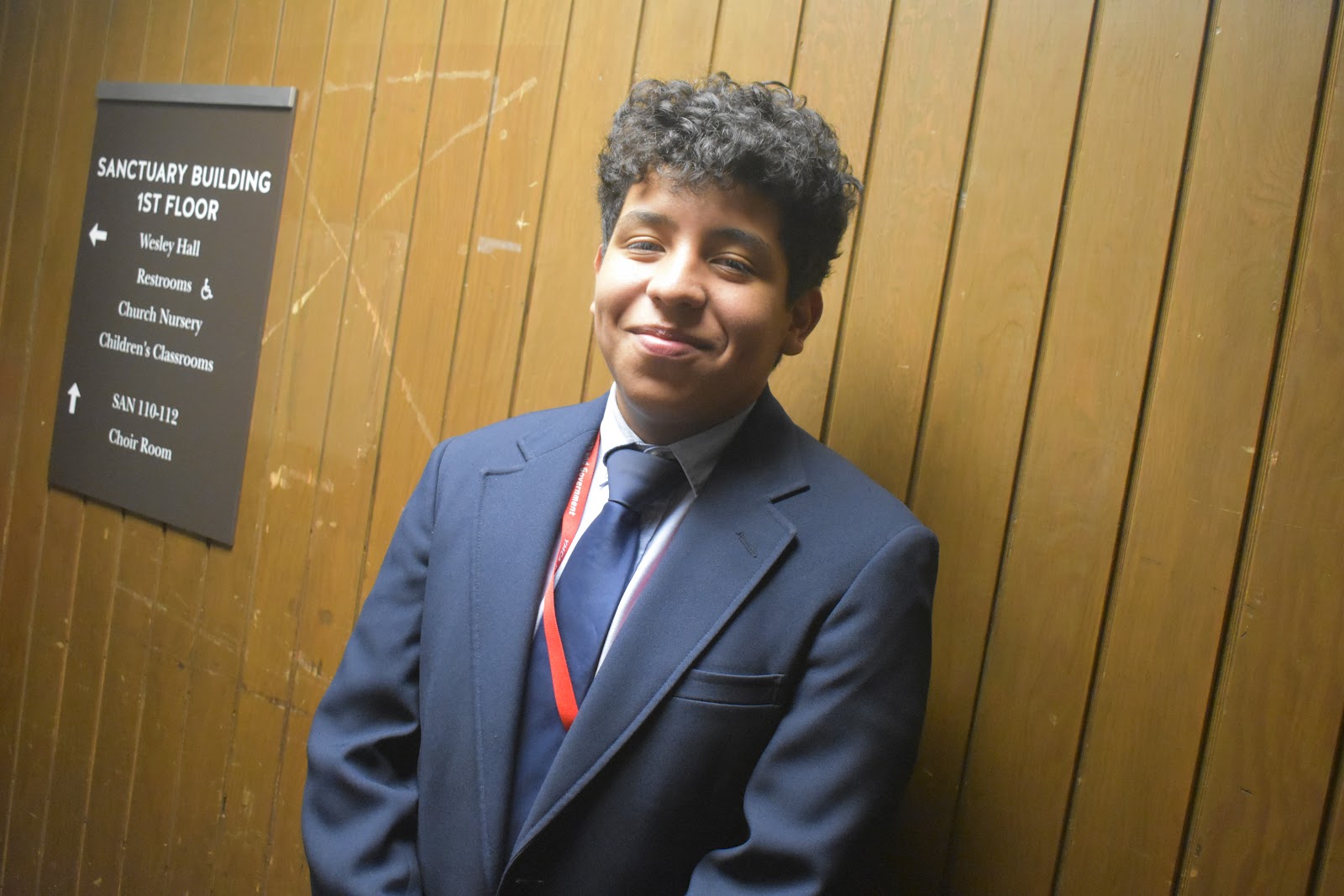 Media Delegate on how Youth and Government can expand the media section:

“We can show what media does..some people when we talk about media say things like, “Oh we have a Media section?” So i believe we should put media more out there by making videos, posting some pictures, and just showing everyone how fun it is so we aren’t as overlooked in the future.”