The Youth and Government program was formed in 1946 to educate and empower young adults as they move into a world of democracy. Youth and Government, or YAG for short, offers students the opportunity to understand and partake in a democracy and the U.S. legal system. Of the several programs offered through YAG, one includes the media section, in which students can gain knowledge in journalism through immersive, hands-on activities.

From the Akins High School senior class, Alize Martinez chose to participate in YAG’s media section under the photojournalism subsection. In this subsection, students must create a collection of photos with a caption attached that tells a story. With the encouragement of her teacher, she joined the media program with the hope and goal of overcoming her fear of public speaking. The concept of photography is not a foreign one to Martinez, who had previously taken photography classes. “I do like the section on photojournalism,” she said. “I took photography classes in middle school, so it’s actually pretty fun.” Martinez believes that YAG offers students the ability to apply the real-world skills they learn in the program to their daily lives. She says, “If we want to use [what we learn] in our career paths later on, it’ll be easier and not so confusing.” This is Martinez’s first and only year participating in YAG, but she says that had she known about the opportunities the program offered, she would have joined sooner.

“I only get to experience it for a short time. If I had started earlier, I could’ve overcome my speaking problem earlier.”

Just as Martinez had felt about the district conference, she noticed other students in the trial court cases she observed seemed to be just as nervous. The students were tripping over their words, but ultimately, Martinez knew they were fully capable individuals. She offered words of encouragement to any students who need to hear them: “Don’t be nervous, and good luck!” 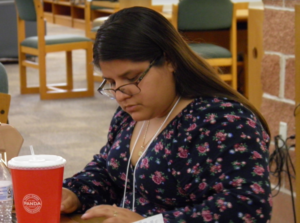