A Look Inside an Appellate Trial

Home/Uncategorized/A Look Inside an Appellate Trial

A Look Inside an Appellate Trial

Appellate trials are a faceoff between two teams of two: one arguing in support of the state’s decision, and one arguing that the previous trial was unjust and that decision should be appealed. Appellate team Jaxie Niles Arguello and Samantha Mason, seniors at LASA, are both first-timers in appellate but have three years of experience in mock trial.

Within the judicial section of YMCA’s Youth and Government program, there is both Mock Trial and Appellate court. The foundation of a trial is replicated in mock trial. In appellate, they are working to appeal a jury’s decision based on procedural errors in the case. Although the two have similar proceedings, there are large differences between mock trial and appeals court.

“In appellate, you are really only looking at procedure, preceding cases, and constitutional law,” Mason said, “While with mock trial, you have to provide some kind of emotional appeal, because you are the one defending the story with personal details and witness testimonies, not with the details of previous criminal procedures and trials.”

“In an appellate trial, you are trying to argue whether or not the statement made previously in court should be appealed or confirmed,” Niles Arguello said. “The appellant tries to repeal the statement, while the appellee tries to argue that the decision made by the state should be confirmed.”

In order to run a smooth appellate trial, competitors spend months making sure they know the details. Not only do they have to know the case they’re arguing backwards and forwards, but also previous cases that are relevant to be prepared for the questions they are asked by the justices.

“My co-council and I wrote two briefs, one for the appellant and one for the appellee,” Mason said, “wherein we talked about the statement of facts, the two points of contention on trial, and we had to discuss the authorities and how they related to the trial we’re presenting today.”

Niles Arguello and Mason were looking for a new challenge this year in Youth and Government. Last year they were both in mock trial and had a team of eight, but this year they wanted to do something with just the two of them.

“We were looking for something where we didn’t need to be managing six witnesses along with ourselves,” Niles Argeullo said., “We wanted to be able to focus on ourselves and doing our best without being responsible for some of the outside pressure that comes with managing witnesses.”

With so many options to choose from within Youth and Government, Niles Aguello and Mason found appellate trial to be exciting as a new challenge. They combined their knowledge from the last three years in mock trial to have successful trials at the district competition. 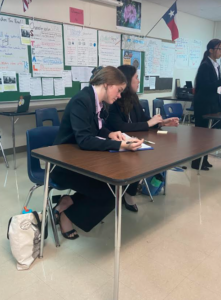 Attorneys Samantha Mason and Jaxie Niles Arguello during their second trial of the day. Not only do they present their prepared materials, but they listen and take notes during the opposing sides arguments to use in their rebuttal.