The Sixth Amendment on Trial

The Sixth Amendment on Trial

The quiet power from the Court of Appeals shines through in today’s YMCA Youth and Government District Conference, hosted this year by Akins High School. The Appellate counsel joins together today to address the case of Larry Bridges (Appellant) vs. State of Texas (Appellee).

The appeal discusses the case Bridges v. Hutton, which ruled Bridges guilty for the attempted murder and assault of Thomas Hutton. Bridges seeks a reversal of his previous court case on the basis of a violation of the 6th amendment right to confrontation and the use of excited utterance hearsay.

Davela, the first speaker, began by explaining the incident between Bridges and Hutton, taking place at the Shepard Correctional Complex’s D unit. Officer Johnson found Hutton panicked, quickly running out of the laundry room with red marks around his neck, accusing Bridges of attempting to murder him. The reviewed camera footage showed Bridges leaving the laundry room at 10:40 a.m. Hutton staggered out of the laundry room at 10:41 a.m. where he meets the officers. Davela recognized the excited utterance from Hutton as hearsay, believing it cannot be a statement used as a testimonial, considering it was taken from a place of distress.

Following Devala and Sfuentes, Bautista presented the appellee’s defense as the first speaker, once again reviewing the incident between Bridges and Hutton, but in reference to the confrontation clause.

“The 6th amendment of the United States deems every person the right to hear testimonies against them, but there are some exceptions,” Bautista sais as a start to her debate.

The statement is seen as a valid testimony, considering when the subject of the crime is in distress, the truth comes out and is the most important at that point in time, using Zuliana v. State and Ricondo v. State to support her case. Ortiz, jumped in after Bautista’s end to explain the appellee’s second platform of defense. She supported Bautista, going into detail of the officer’s primary purpose to question Hutton was for an ongoing emergency and not as a testimony, allowing Hutton’s statements to be used without violating Bridges 6th amendment. Ortiz used the past case of Michigan v. Bryant to explain the use of statements from victims, despite them being seconds after the incident happened.

The speakers ended their defense, with Ortiz making a final statement: “The court did not abuse this discretion.”

The Judges, Sophia Snider and Foriella Salazar, dismissed to recess to consider the Appellee’s and Appellant’s defense and evidence, before arriving back in session to reveal the final decision.

”Having considered the arguments of the counsel, this court finds the case in favor of the appellant, reversing the ruling.” decided by Snider as the last word.

The court adjourned with the final decision being made, and the two sides met in friendliness to remark on a job well done. Devala and Sfuentes left the room with pride, successfully reversing Bridge’s case for trial. 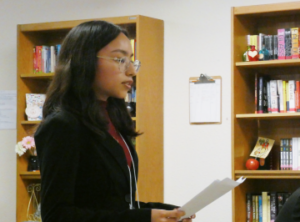 Evelyn Ortiz, an Akins High School delegate, reads her notes, presenting the second platform of defense against Bridge’s appeal for reversal of the ruling in Bridge v. Hutton.