A series of photos which goal is to show and tell the story of what happens inside the State Affair committee room walls with insights of delegates proposals and SAF evaluators.

Delegate Moses Garza, excited to attend his first state conference and ready to face this busy weekend head on, was going over his proposal on obesity rates in Texas. On his way to First United Methodist Church, he wrote down the key points of his speech. This includes statistics such as “approximately 70% of adults are overweight or obese” and how his plan of action is “to establish a supermarket or any source of fresh food in areas with populations of 3,200 and up.”

Diomarvellous Nsfor is the State affair Forum Chair with the role  his role of being the chairman for committee room 100 as a chair he monitors the delegates to follow with their roles. Not only does he “uphold parliament to the highest but he upholds their time to be fair “ as they all have dedicated time and effort into what they do .

Delegate Cayla Barlow reads over her flash cards and is ready to present her proposal that she explains she is very passionate about. The proposal is about how The United States should regulate their sales on Arsenal weapons due to the recent school shootings that have been happening. Her goals are to make the process of getting guns harder and to raise the age to obtain weapons to 21. She believes, “America should go for this as we need to change on the gun laws , cause if we keep this reoccurring problem going when will we ever put a stop to it”.

Matthew Garcia & Oscar Salazar from Oak cliff delegation share their experiences as Chair and clerk. Matthew states that He’s been chairing since last year for SAF and in his opinion chairing has been magical beacuse those “busy active times where everyone is debating makes [him] want to continue chairing in the future.”

On the other hand for Oscar, Clerking is stressful “it’s a great experience and helps you in your multitasking skills because, though the chair looks to have the control, the clerk is a big part of it; “it’s the backbone of the room with a bit more responsibilities.” He later adds that though stressful he wants to continue clerking for SAF .

Delegate Noah Busbee proposal was supporting the privatization of health care and the expansion of local markets to provide both people who are uninsured and suffering from low quality income. As Noah states, “Socialism is really bad,” which in his perspective was simple and cut to the point for his proposal in order to be a compelling statement. The main con for this proposal was the deregulation of the market and the fact that this would allow private companies to decide the quality of care that these people would receive.

Natalie Thomas, a college Staff and old YG delegate, was the evaluator for room 101. This was Natalie’s first time evaluating and she goes to say that she enjoyed it because “students are very passionate about what they work on and you can tell with the way they present their proposal and questions.” Evaluating has been a fun experience for her, she explained, and, she would definitely do it again in the future .

State affairs: YAG is for friendships

Emma Brunk from Moody Family & Ahmad Crawford from the Barack Obama academy in a slight moment during the evaluating period were having a conversation which led to a friendship. They both agree that Youth & Government’s best attributes are the easy to form friendships which happen in a moment and last a lifetime.

State affairs: Include all administrative water districts into Texas HB 1648

Delegate Madison Irvin Richardson with her proposal which is to included all administrative water districts into Texas HB 1648 where the goal is to “grow, expand and improve our water districts.” One delegate who was appointed to speak for con broought up that the proposal is “a great idea but an even greater of a plan to enforce.”

Delegates Sarah Gianotti and Luke Jamil present their proposal to band for-profit prisons due to their explained unethical behavior. They are wanting to phase out private prisons and make them public. A  major factor in their proposal was that this change would lower crime rate since “the main goal of imprisoning individuals should be for rehabilitation.” Allowing the government to contract private prisons which operate with the goal of making money, is “a step backwards in the pursuit of achieving a fully rehabilitation based system.” 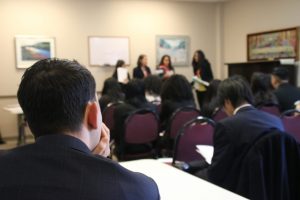 Evaluator Philip McCarthy from Episcopal High School explains that he is very impressed with the State Affair Delegates . He said that, “they are really good at what they do; they are very well informed, whatever you throw at them they will catch it.” He spoke very highly about all delegates and explains that he likes evaluating because of this.