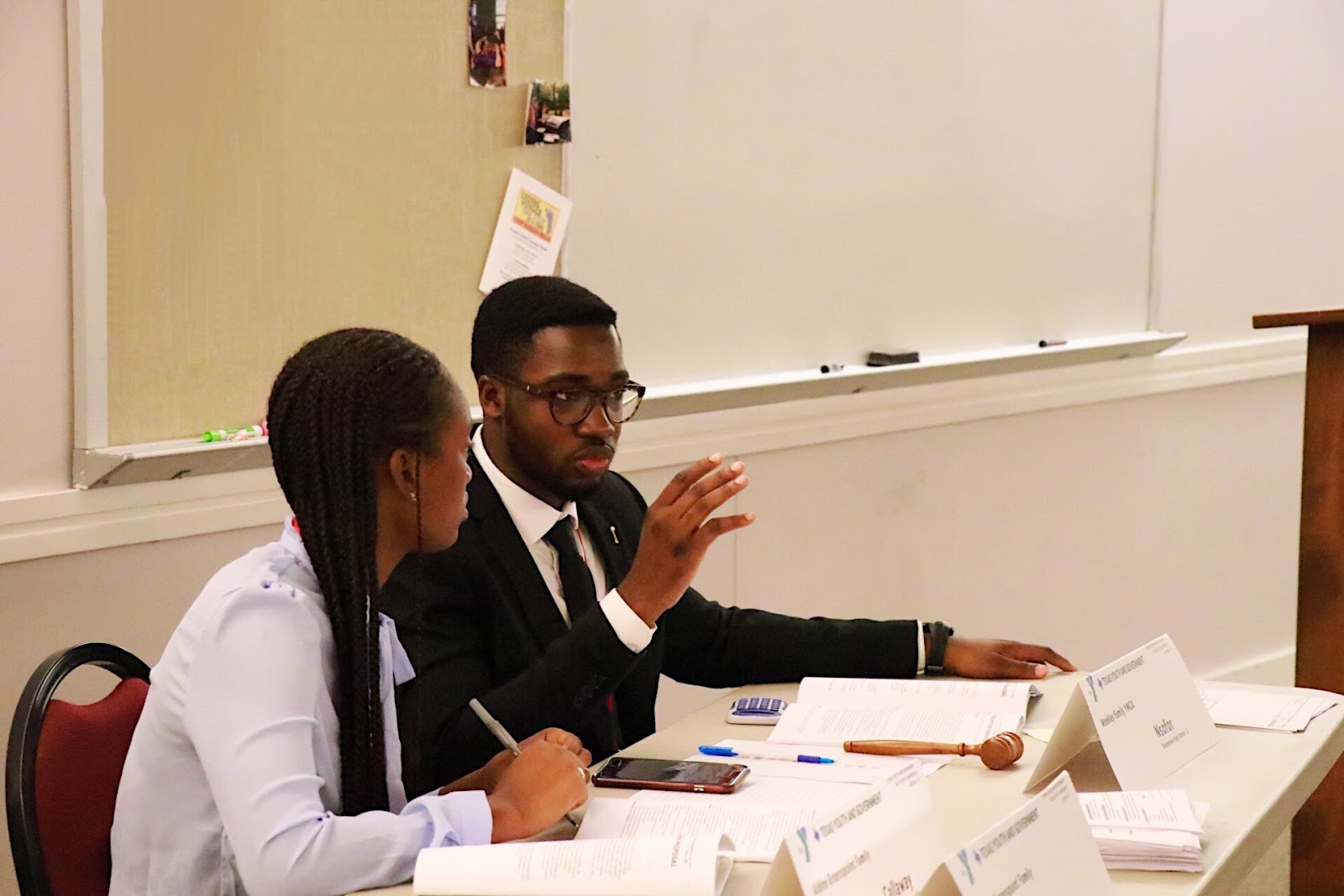 Chairman Diomarvellous Nsofor shown above (Right)  giving opening remarks and last minute reminders about parliamentary procedures to the delegates as they prepare to put the first proposal on for debate. Chairman Nsofor later had to leave the chamber to the Capitol for a meeting passing on the gavel to Chairwoman Garza . 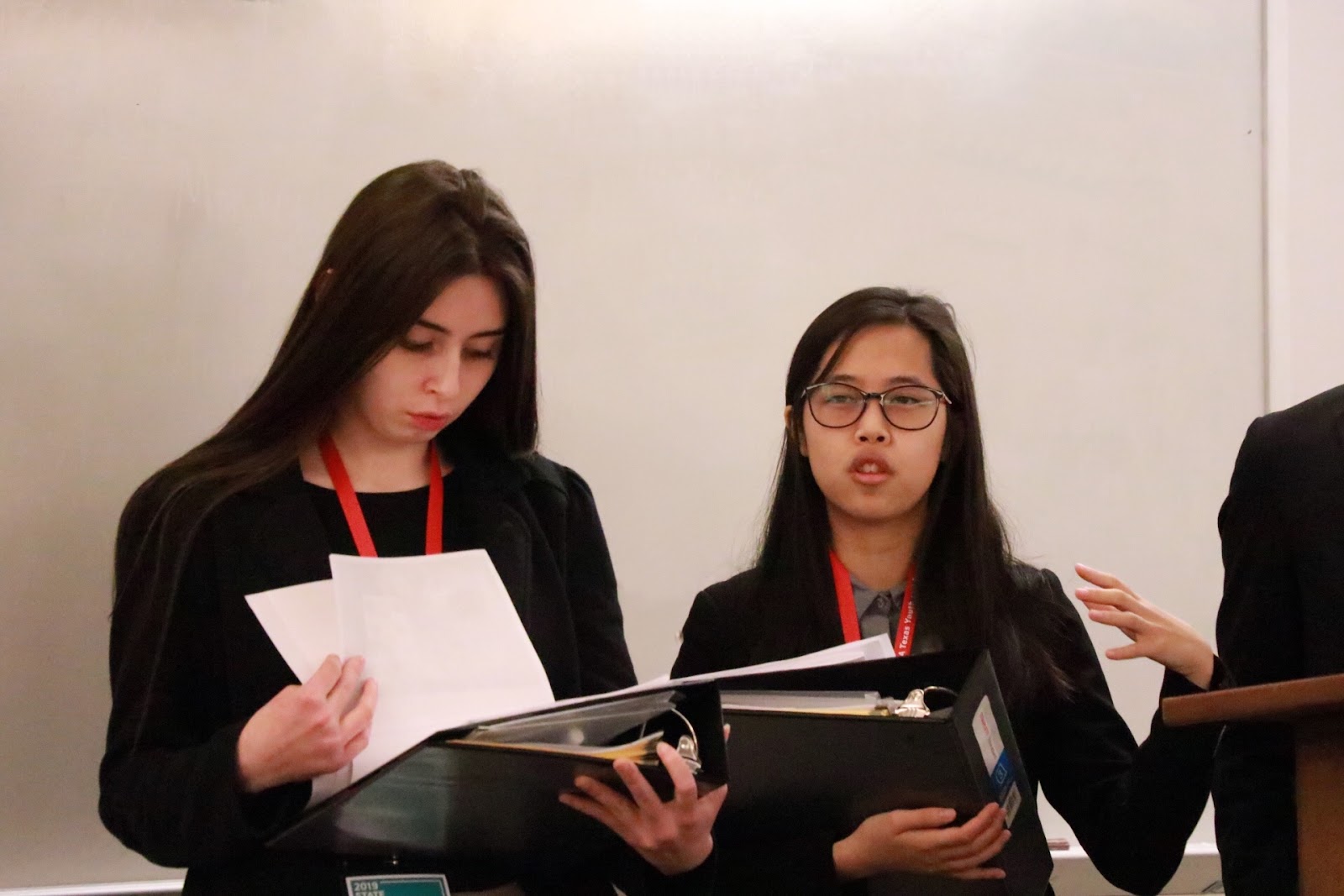 Two Delegates from Duncanville proposed various solutions to address this growing problem. One of the solutions was establishing a 10:1 ratio of fast food restaurants and convenient stores to grocery stores, helping to stop low income neighborhoods from being exposed to more unhealthy eating habits. 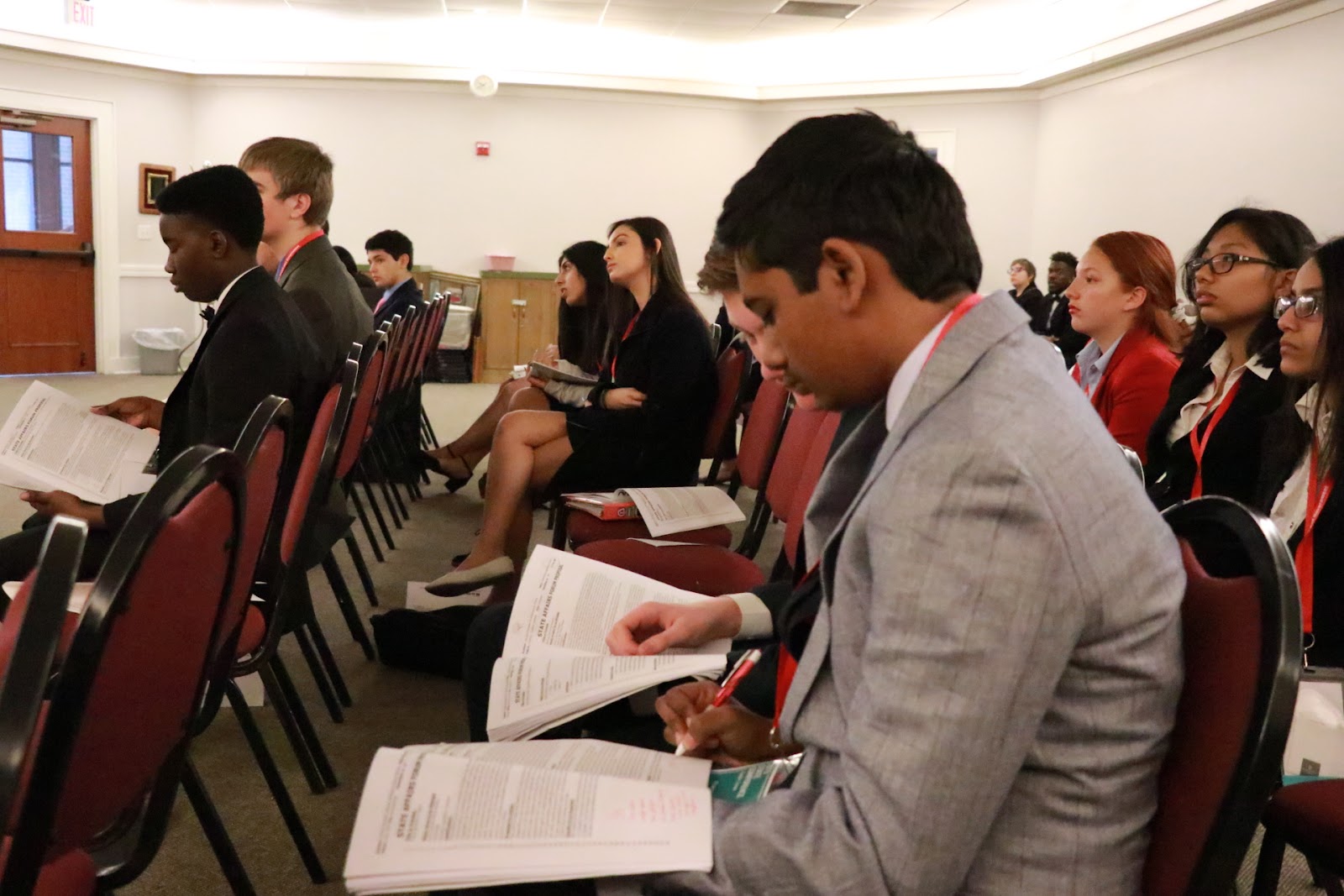 Delegate Pranva Ganta is seen scoring the first proposal in his chamber after previously giving a con Speech over the proposal. This Year State Affairs received a new and improved scoring ballot that is set to be clear, concise and attempts to prevent biases when it comes to scoring. This year the ballot scores on how and with what the author presents their proposal. 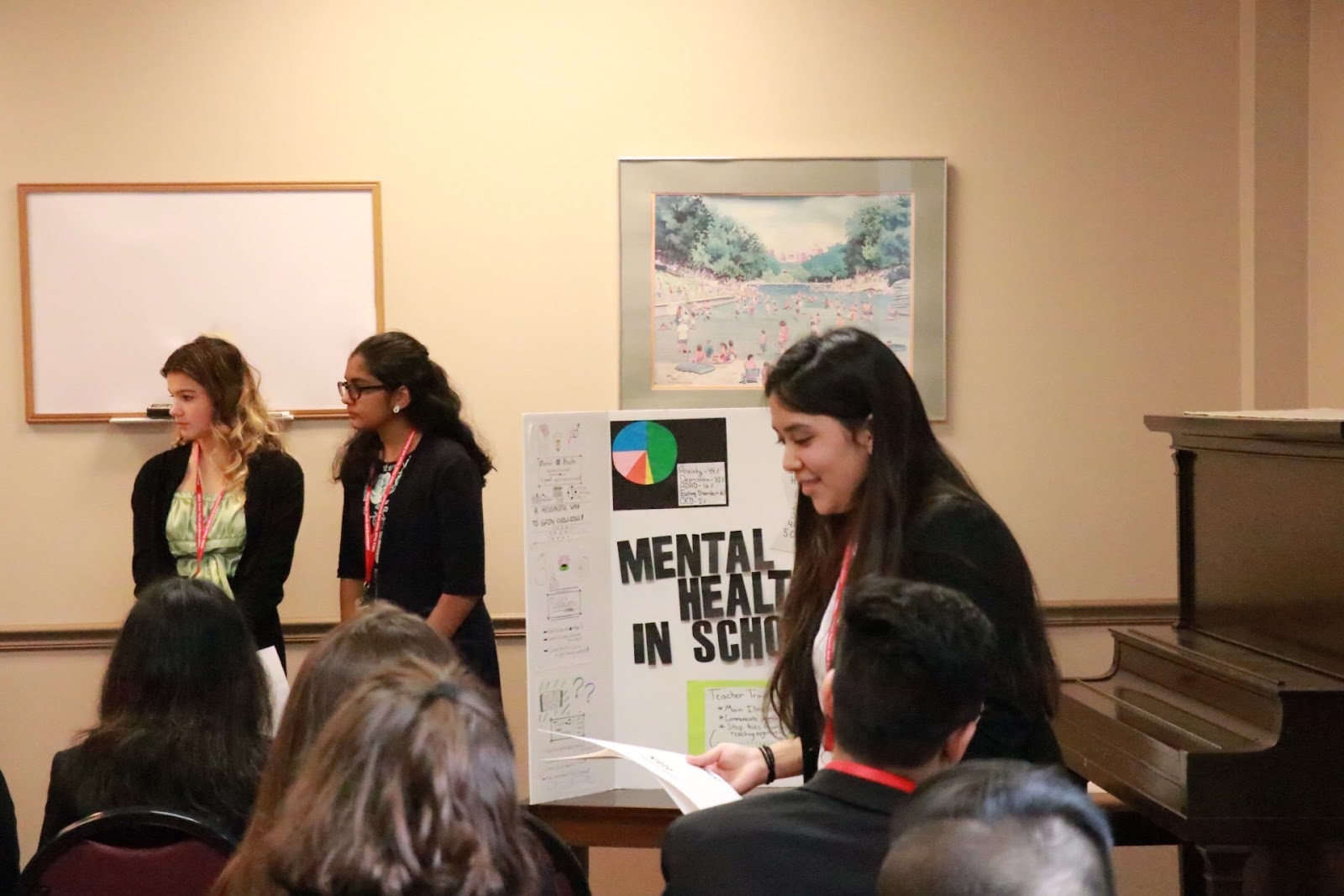 Isabella Nieto showed strong support towards Sheridyn Campos and Nirupama Balaji’s “Mental Health In School” proposal while giving her Pro Speech. Delegate Nieto expressed the the importance of mental health in education after stating that, “1 in 5 students suffer from a mental illness”. The Author’s Proposal called for the establishment of a “Mental Health Awareness Week” that would allow students to reflect and learn about certain illnesses. 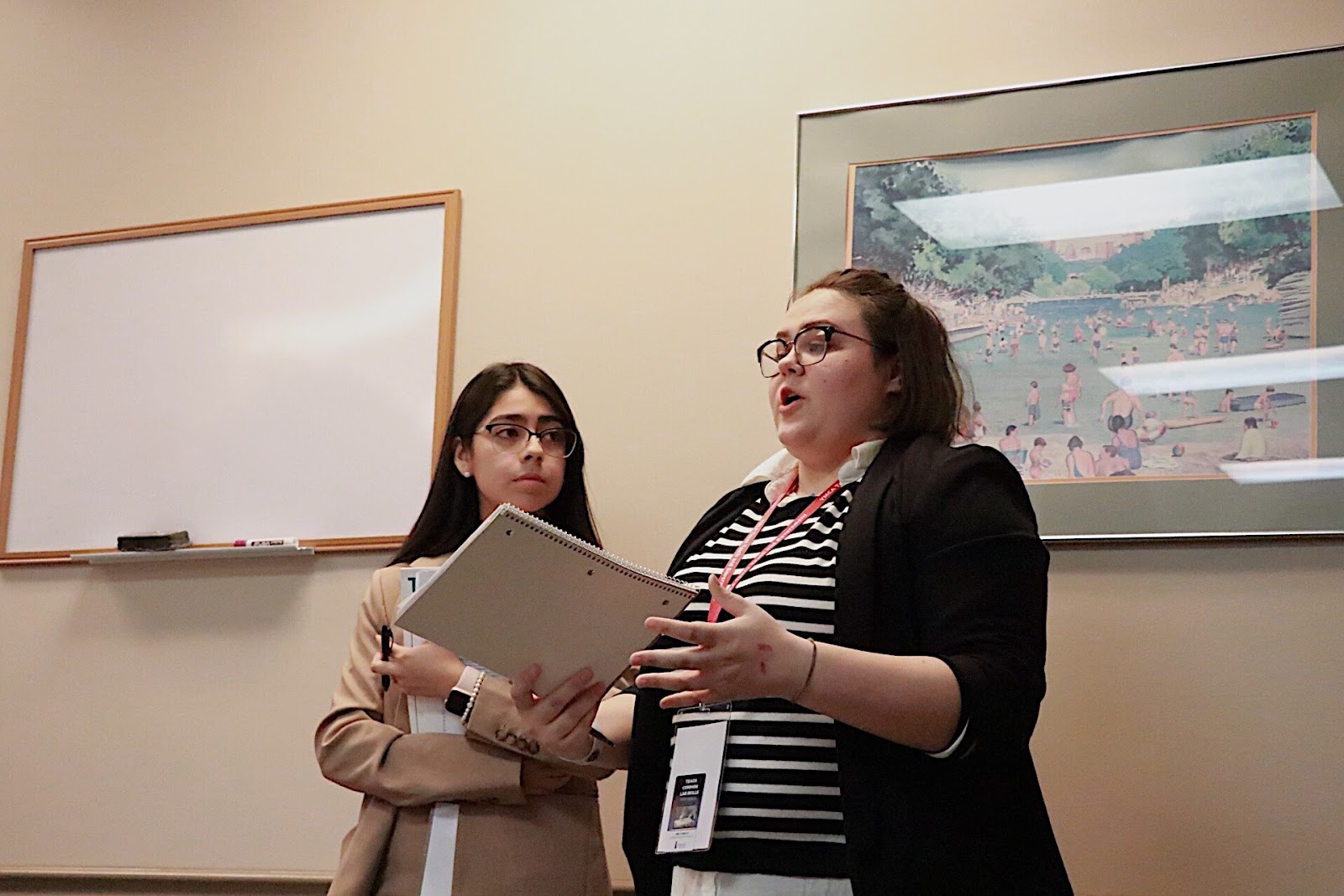 Delegates Ashley Calderon and Faith Harlan are shown above giving their proposal hoping to ban discrimination based on sexual orientation in the workplace. These two delegates from the Fort Worth delegation moved the audience with their compelling proposal, especially after delegate Olivia Olatunji said, “LGBT rights matter.” 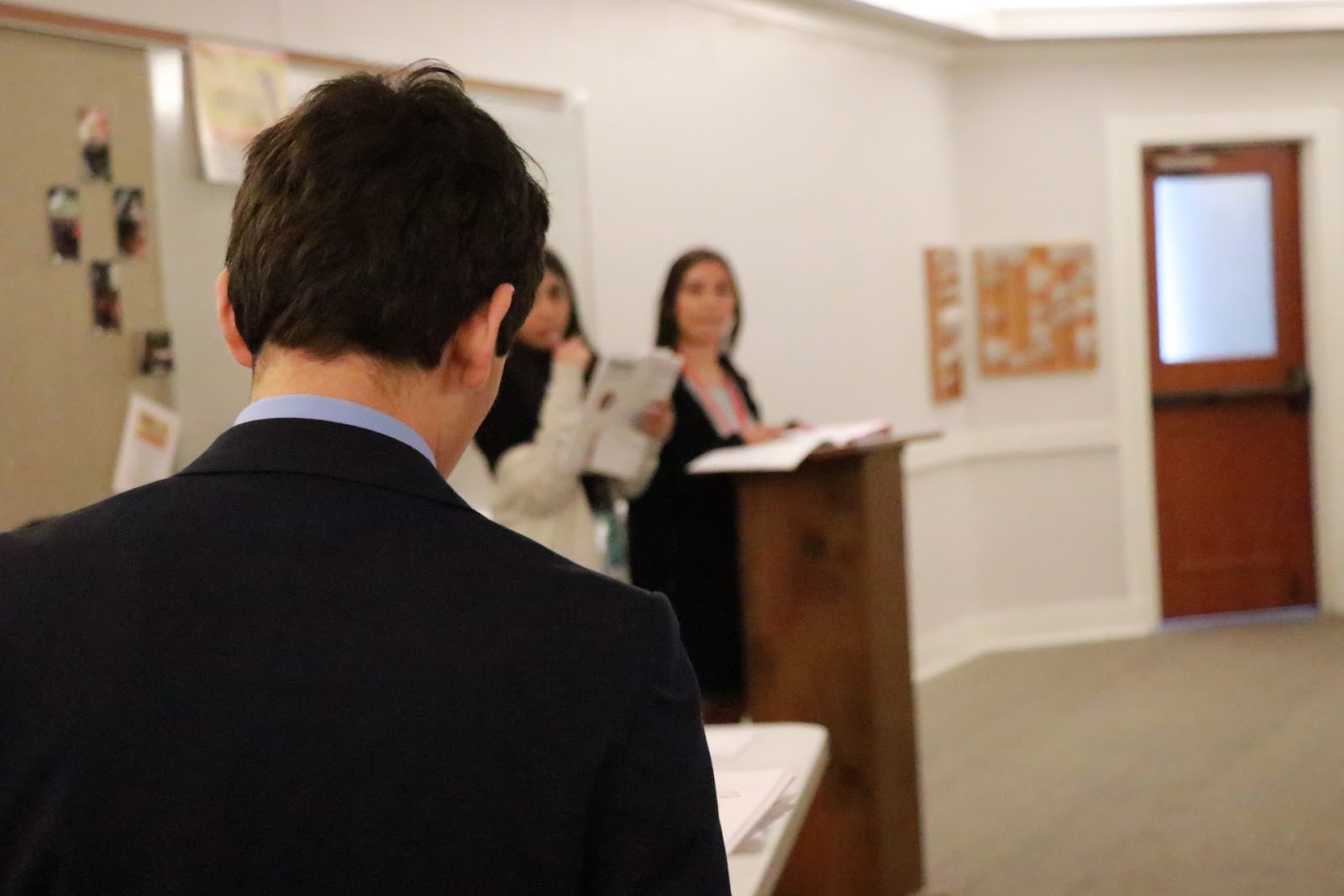 Delegate Moises Garza is seen participating in a round of non-debatable questions with delegates Greta Romero and Amanpreet Chahal in which they call for the banning for-profit prisons. Delegate Garza questioned on the process on how the prisons will become deprivatized. The both authors later addressed Garza’s concerns in their closing summation. 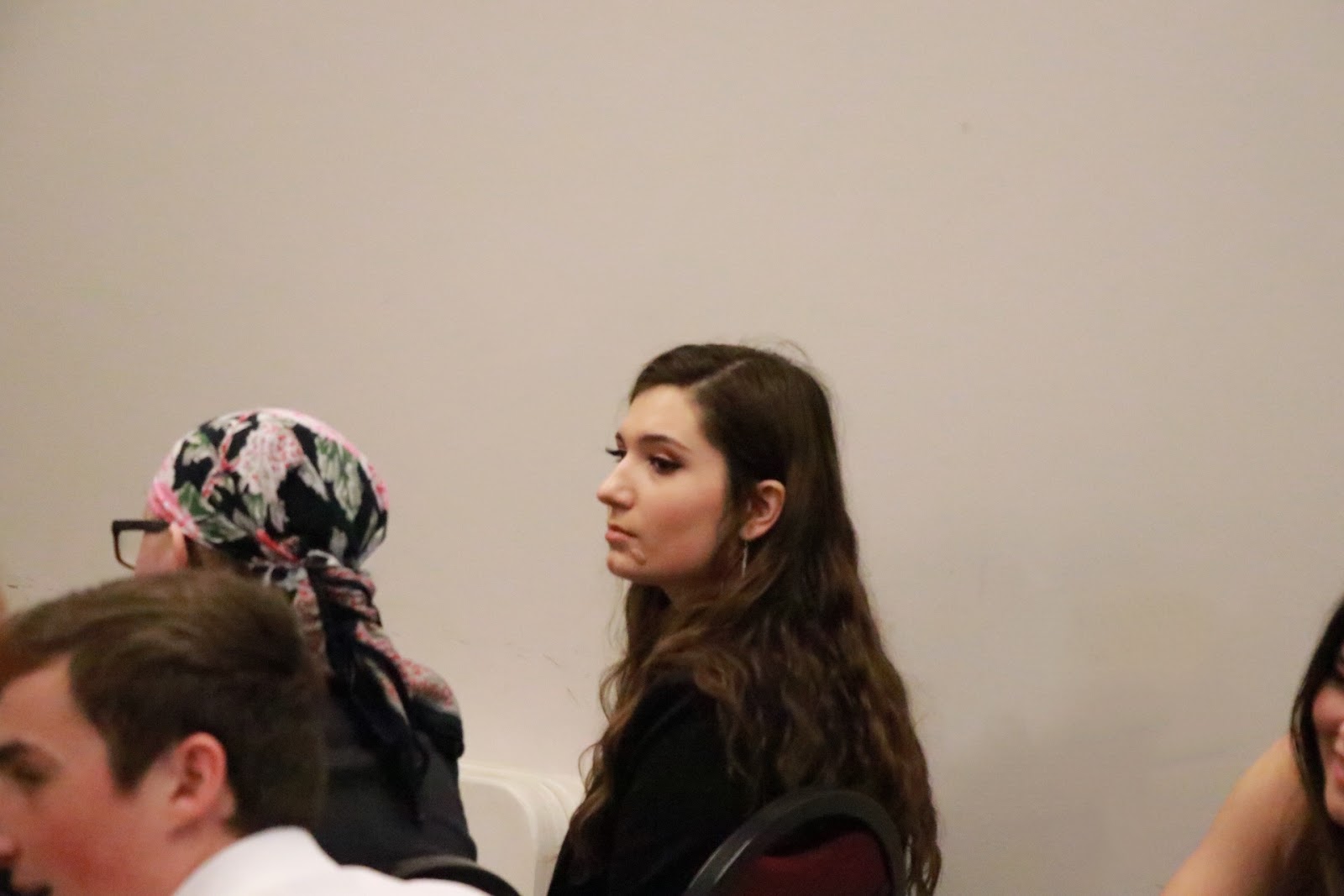 After Delegates Zach Plyer, Amr Kinnare and Kaza Nawrocki presented their proposal over the Spaceforce which called for the creation of a sixth branch of the military which would “absorb” the duties of NASA including space exploration. Kristin Kamarinos (Center) stated in her Con speech that Texas should not fund this program and should keep the duties of space exploration at a local level as she herself does in her her own school under a NASA high school program. 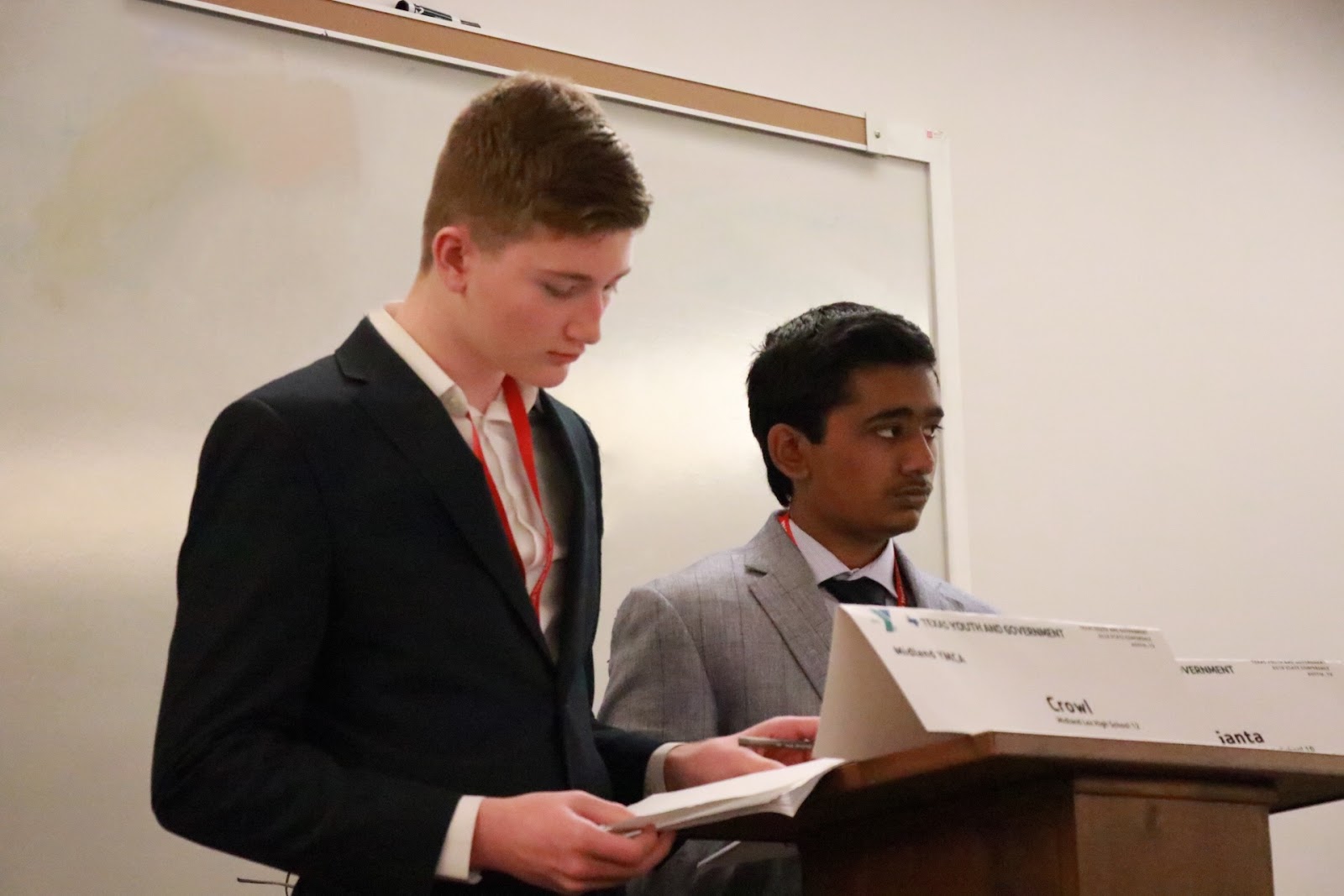 Delegate Crowl (Left) and Delegate Ganta (Right) presented a strong proposal this afternoon regarding the action of reforming Texas Health care. Delegate Crowl in his opening remarks stated that California has double our population, yet 95 percent of their population has health care insurance. Both delegates from Midland, Texas are asking the state of Texas to operate using a two-tier system in which the government supplies the legal citizens with fundamental healthcare. 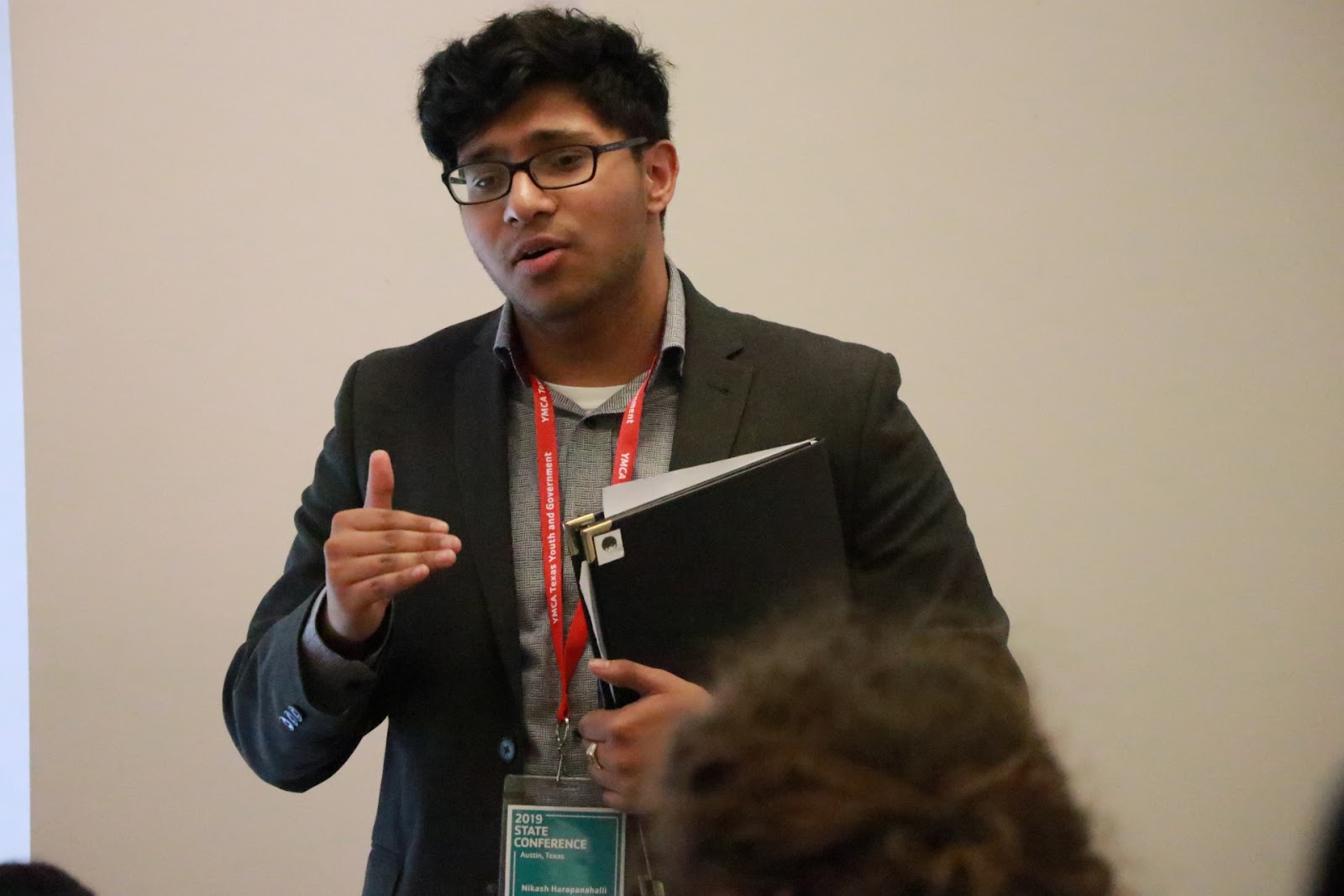 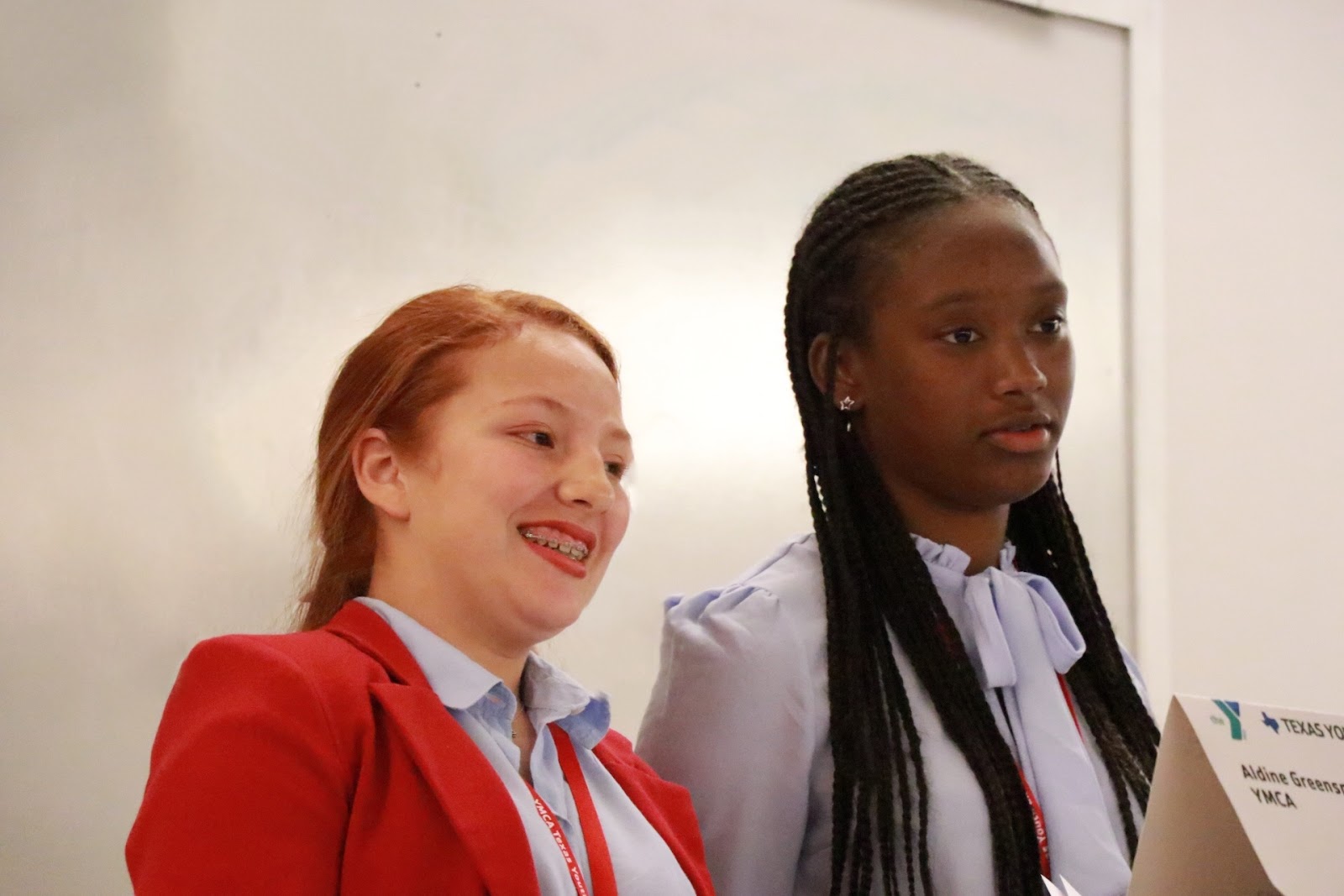 The State Affairs delegates definitely displayed moments of seriousness, emotion and laughter. Overall, today delegates’ hard work paid off and was very evident in the proposals they presented.